Reversing fate through love for land, forests and water

Abhijit Mohanty brings us the story of certain tribal villages in Koraput district of southern Odisha that have successfully overcome the challenges posed by denudation and inadequate irrigation and have etched out a path towards food security and well-being.

“A good crop will last till June-July while a bad crop lasts till March-April. How can we survive? If only we had gold, bullock or land. But, we have nothing so. We can’t get even a loan. Once I had gone to the bank for a loan. The officer asked me if I owned land, you can get a loan only if you have land, otherwise not! This is what I was told at the bank. What can poor people like us do? Only continue living in dire poverty…what else?”

Such desperate questions from Bagajani, a farmer of Upargadla village mirror the plight of many tribal communities across Dasmantpur Block of Koraput district in southern Odisha. Ironically, the hilly terrain here gives rise to several perennial and seasonal streams that allow for a rich diversity of crops, and vegetation. Add to this, the bountiful rainfall that blesses the region, and yet, poverty and hunger afflicted the tribal communities of the block for major parts of the year.

This is because the fragile eco-system on the undulating upland terrain has been destroyed by unchecked felling of trees, denudation of the forests and rampant shifting cultivation. Years of exploitation have affected the wellbeing of the communities severely in most tribal districts in Southern Odisha, leading to chronic malnutrition and ill health, symptomized by annual epidemics and high rates of distress migration.

Things were not always this bleak, says Laxman Jani, a 64 year-old farmer of Dakamara village: “When there were trees on the hills, the crops were good. But now it is barren. Rains have washed away the top fertile soil. So we don’t get a good yield anymore.”

Sundei Saunta, President of Dasmantpur Mahila Sangha, shares how they have to cultivate in some of the most denuded and rocky lands. The lack of irrigation facility makes the situation worse and they have to depend on the vagaries of monsoon each year.

Saunta says, “Adivasi people like us plough our lands to sow millet. Millet is intercropped with turmeric. Both grow simultaneously and we weed them. Millet is harvested in the first year itself. Then we cover the field with straw and fence it to keep animals away. The turmeric has to be left in the field for the next two years. On the third year it is ready and we dig it out, after which it takes one to two months to dry. Finally, we fill the dried turmeric in sacks and bring it home. It takes a lot of time but that is how we have to do it. After all this time, one quintal of turmeric sells for Rs 3000. That is all we earn. Is that enough? Adivasi-Paraja people have to work very hard even to get such a paltry amount.”

A ray of hope

Things however may be looking up for the tribal agriculturists in the region, thanks to the efforts of the Ama Sangathan (AMS) – a federation of tribal women, constituting 1200 members and the tribal people of Dasmantpur.  With the aid and guidance of AMS, many communities in this region have pushed the limits of human endeavour and overcome the crippling poverty of their lives.

In Dakamara village for example, AMS held a meeting to explain the benefits of earth and stone bunding. “They told us that bunding would check rapid soil erosion and recharge rain water as well as increase the productivity of the land. This would give us good crops,” says Laxman Jani. The villagers followed the advice and with technical support from the organisation, took to land development through levelling, earth and stone bunding. Neighbouring villages also followed the example. 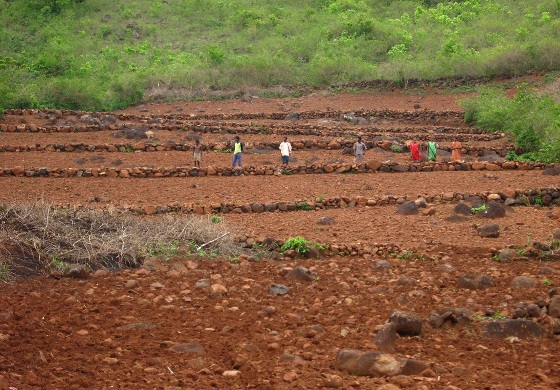 Orchards in the upland

Once land development was done, villagers enquired about the best farming model to follow, which would not only provide them food security round the year but also equip them with the resilience to combat the harsh environmental circumstances. After deliberation and discussion with AMS, the Dakamara villagers decided to cultivate orchard plants along with intercropping of traditional millets on the common land.

Where trees had been cut and rains had washed the top soil away, cashew and mango saplings were planted. This was intercropped with varieties of minor millets like ragi, foxtail, proso and finger millet. The produce from these is generally used for household consumption, as these are some of the staple foods for Adivasi.

Sundri Jani from the village says, “They told us that if we don’t plant trees on the higher slopes, our lands will have no yield. So, we raised orchards on the common land of Government and fenced each sapling with stones.”

The women work collectively on these orchards on behalf of the Mahila Mandal (MM) of the village. Sundri is visibly pleased with the results as she says, “The trees have started yielding fruit and in the last year alone, we earned Rs. 48000 by selling cashew nuts and Rs. 31400 from selling mango. Out of these earnings, we distributed Rs.51400 among 32 members of the Mahila Mandal and deposited Rs 10000 in our MM bank account as savings. Thus the earnings per head from the common land was Rs.2168.75.”

The women are also growing garlic and tuber together. The garlic has been harvested and the tuber will soon be ready. Thereafter, they plan to sow maize, intercropped with beans and okra. In this way, they can harvest three to four crops at a time.

Yet another successful experiment led by AMS in the region is ‘social forestry’ – usually promoted in community land to meet the community needs for firewood, fodder, small timber. This also helps to conserve soil and water in the region.

A particularly successful model of this can be seen in Tentuliguda village, where trees such as acacia, karanjia, borda, jackfruit and many citrus fruits  were planted with the the support of Forest Department in 10 acres of barren land under the Social Forestry Programme. 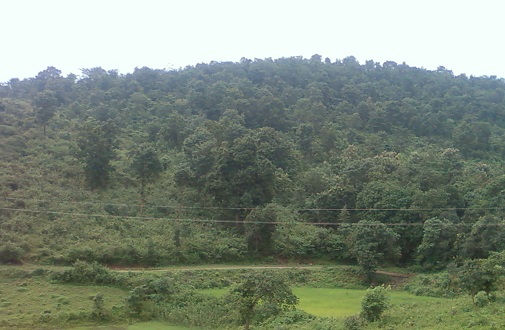 The project was designed in discussion with women and community leaders so that it could help meet community needs, stimulate local interest and bring about greater involvement than programmes with a top-down approach typically do. But the task was not as simple as it sounds.

Andharu Bhoi a community leader of the village narrates the long struggle to protect the forests from poachers. According to Bhoi, villagers from Katapiti logged the entire forest adjoining their village. On the other side, the people of Punishell also felled a lot of trees.

“We feared that the entire forest would be destroyed within no time. So we held meetings to protect the forest for our future generations. We decided that one person from each of the 50 families would guard the forest every day. But the loggers were armed with axes and choppers. They did not listen to us and continued felling the trees,” says Bhoi.

He goes on to narrate an incident, which though disturbing stopped the attacks on the forests: “One day our villagers caught a logger. They brought him to the village, stripped him completely and tied him up with ropes. After that, no one ever tried to cut any trees. Now we are getting firewood, medicinal herbs and a range of fruits and roots from the Social Forestry Programme.”

Apart from meeting basic needs, the initiative has also gone a long way in educating the community about the need to protect and conserve natural forests.

“During dry periods, there was nothing to eat. No vegetables, absolutely nothing. As we had no irrigation system, we could cultivate our lands only once a year. During the rainy season, there was no clean water to cook.” – These were common complaints of villagers from Tentuliguda. Faced with these challenges, AMS held a meeting in the village to discuss the problem of water scarcity. The villagers came up with suggestions on solutions to the problem.

Sobhini Muduli from the village says, “We thought about diverting water from the water source on the hill to our field. All 40-50 people of Tentuliguda worked for 15 days to dig the 3.5 km-long canal. All of us worked for free. But, bringing the water to the village was very difficult, since the canal had to be made over low land that was 25 feet wide.”

The villagers applied to the government for help. The engineers inspected the area and said it would cost the government Rs.10 to 20 lakh to actually bring the water to the fields. Eventually, they rejected the application. 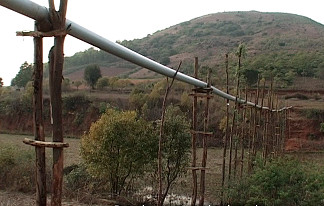 “When we told them about this issue, AMS staff said that they would give us a pipe. But we would have to take care of the rest. We cut 10 eucalyptus trees from the eucalyptus plantations next to the village pond. Each one was 25 to 30 feet tall. We used them as pillars to support the pipe. That is how the pipe crossed the lowland,” recalls Muduli. “Our landless brothers also joined us. In return, we gave them some irrigated land for share cropping.”

The committed efforts of the villagers and the indigenous technology used to divert water from the hilly areas to the agricultural land caught the attention of the Government as well. Eventually, a diversion canal was constructed with the support of the block administration.

Today, the people of Dasmantpur dare to dream of a future – a future where their beautiful mountains will yield food, fruit and shade and not turn into agents of destruction, burying their crops and homes with rock and soil following rains. Guided by AMS throughout the journey, the tribal community has pulled itself out of a morass of poverty, dejection and misery. The positive energy created has rejuvenated the land as well as the people.

The author is Fundraising Manager at Agragamee, Odisha. He also works in the areas of literacy, rights-based advocacy, social research and writes article on tribal development issues. AMS is a sister organisation of Agragamee.