Local fields of health and livelihood

Mamata Soren, a 35-year-old Santal Adivasi woman is visibly pale, weak and often complains about leg cramps, chest pain, dizziness and rapid heartbeat. Soren lives in Bandhagada, a village in Khunta block in Odisha's Mayurbhanj district. Most of her symptoms point to anaemia; 10 other women in the panchayat are in a similar condition. Children too are affected; their physical and cognitive growth and development are often limited by anaemia.

According to the National Family Health Survey 2015-16, more than half of Indian women and 59 per cent of children between 6 and 59 months are anaemic in India. And one in two adolescents suffers from deficiencies of at least two of the six micronutrients they need, as per the Comprehensive National Nutrition Survey report released in 2018. Odisha ranks poorly in women and child health indicators; the state sees more infant deaths per thousand live births than the national average, and more than 60 per cent of women registered with ante-natal clinics are anaemic.

Proper nourishment has been hard to find ever since the pandemic struck. Prices of vegetables soared due to reduced supply during the lock-down, and many tribal families were unable to afford them. At the same time, with small landholdings, tribal farmers were also unable to sell their rabi crop outside their villages. Caught between these two developments, most families have ended up using the little savings they had to make ends meet.

Forest resources have also been depleting for many years now, and people are no longer able to harvest wild leaves, roots, mushrooms and berries they way they once did from forests adjacent to their villages. Forest-based foods are a traditional safety net, very useful in providing essential nutrients during lean seasons when vegetables and fruits are in short supply. They also supported people's incomes during lean seasons. But tribals can no longer count on that protection.

The toll on people's health is evident. Auxiliary nurse midwives (ANMs) and doctors working in Karanjia block of the district say that pregnant women, lactating mothers, children, adolescents and the elderly in tribal areas have all been hard-hit. These groups, who face the most vulnerability during the health crisis, need special assistance.

The pandemic crisis has also heightened the need to revisit some of the chronic issues that have been jeopardising the community's food and nutritional security. For instance, people's diets have changed over the years and farmers now grow commercial crops. The practice of mono-cropping is widespread instead of the community’s traditional mixed-cropping and inter-cropping methods of agriculture which ensures the harvest of diverse nutritious food throughout the year.

As far back as 2006, the state government had formed the Odisha Livelihood Mission (OLM), an autonomous society under the aegis of its Department of Panchayati Raj. Its mandate is to implement poverty reduction programmes that provide diversified and gainful self-employment to the rural poor. The mission has focused on mobilising poor households into effective self-help groups; enhancing their access to bank credit, technical and marketing services; and building skills for sustainable livelihoods development. OLM also works to converge multiple schemes with a focus on development outcomes.

In May last year, OLM, working with the district administrations and the National Rural Employment Guarantee Scheme, began establishing nutrition gardens. This program encourages the rural poor to grow nutrient-rich vegetables in their home gardens. An early focus was in areas where anaemia and manlnutrition are prevalent. Around Rs.500 crores was allocated under NRGES for this during 2020-21. The OLM provided seed kits and organised field-based training programmes on sustainable farming techniques for farmers.

Supported by civil society groups as well, the mission has created more than three lakh nutrition gardens so far.  Through training and capacity building programmes, OLM has improved knowledge and practice of 7.5 lakh women SHGs on health and nutrition. A celebration of dietary diversity was held among 8 lakh women in January this year through Odisha Pushti Mahotsav in 10,000 villages. OLM is also developing 314 model nutrition-sensitive gram panchayats.

Picture: Field training on how to design a nutrition garden.

Awareness and training sessions on nutrition gardens were organised by OLM in collaboration with local krishi mitras (farmers' support groups), community leaders, successful farmers, ANMs and civil society organisations. Soil conservationists and sustainable agricultural professionals have shared technical know-how on nutrition gardens amongst the farmers which have ensured a smooth transfer of knowledge and skills. These sessions played a critical role in capacity building and also popularised the importance of chemical-free farming among farmers. They have learned how to select and preserve the best seeds, effective soil management techniques, viable irrigation methods, preparing low-cost organic pesticides and insecticides, sustainable crop sowing and harvesting cycles.

“We gave top priority to use locally available resources,” said Srinibas Das, who is a project manager for OLM in Khunta. Farmers were encouraged to use kitchen discards, crop residues and other bio-degradable waste materials to convert into organic manure. Similarly, dried leaves and grass have been regularly used as mulching in the nutrition garden to boost soil fertility. Instead of monocropping which was once predominantly practised in the area, farmers were motivated and supported by OLM to grow green vegetables, leaves, tubers, roots, legumes and citrus fruits.

"The types of vegetables are selected based on nutritional value, cultural acceptability, seasonal availability and resilient to local climate," said Minaketan Naik, an OLM project manager in Karanjia. Forty five days after establishing a nutrition garden, a household can generally start harvesting fresh vegetables round the year," he added.

The active participation of women has been key; traditionally Adivasi women prepare, process and preserve family food supplies. And the women themselves - along with children - are the most vulnerable in the absence of nutritious food. "We conducted participatory nutritional education programme for mothers and pregnant women," said Pragya Paramita Naik, a young professional with OLM in Karanjia. Participants were provided with the basic knowledge to improve their household's nutritional intake and food consumption diversity," she elaborated.

"Every day, we harvest 5-8 types of vegetables from our nutrition garden," said Soniya Majhi, 31, a woman farmer at Juradihi village. "Since last year, vegetables have become too expensive to purchase. But now we grow our food, and are feeling healthier than before," she chuckles. "Our children (3-year-old son and 5-year- old daughter) are eating fresh vegetables every day. They are more healthy now," her husband Dushmanta Majhi says beamingly. 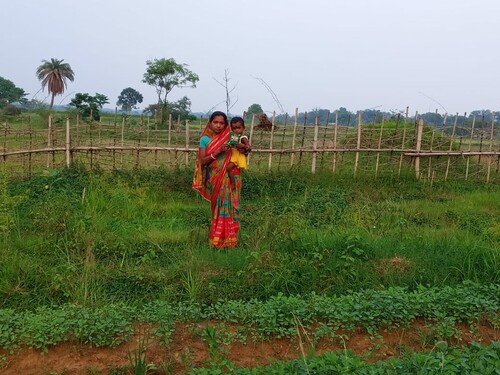 Picture: A woman farmer with her
young daughter in their nutrition garden.

There are hundreds of thousands of Adivasi women farmers like Sonia in the district who are reaping multiple benefits under the nutrition garden programme. In Karanjia block, women are excited to share information about the additional income which they have earned after selling their surplus produce. “We are saving Rs. 200-300 per week. We don’t need to buy vegetables," said Ranjeeta Naik, a woman farmer from Karadia, a village in Karanjia block. "In the last three months, we have earned around Rs.7800 from selling surplus produce," she added.

Women farmers are now also planning to increase their production post lockdown and earn a stable income from it. "My husband helped to expand our nutrition garden plot," said Sita Naik from Sonaolia village. "Wage labour options are scarce now. Our only income is coming from the nutrition garden. Therefore, we decided to scale up the plot," she explained.

"Tribal women farmers in Mayurbhanj district are now practising eco-friendly cultivation methods," said Subrata Behera, the block livelihood coordinator for OLM in Baripada. They preserve indigenous vegetable seeds for use in the next cropping season. In this way, the nutrition garden is conserving the local indigenous crop varieties. These serve as a local gene pool, and micro conservation centres have been established at the community level.

Nutrition gardens are also enabling tribal communities to increase the intake of culturally distinct vegetables and tubers. Through these gardens, older family members are passing on traditional agro-ecological knowledge to their children and grandchildren, and sometimes to relatives in neighbouring villages as well.

"Changing people's consumption behaviour is important," says Dasmant Marandi, Chief Medical Officer at a community health centre in Khunta block. Adivasi women in Mayurbhanj who have established their nutrition garden are now preparing nutritionally balanced dishes with homegrown vegetables. This provides a ray of hope for thousands of Adivasi people in Odisha, for whom it is a constant struggle to access nutritious food round the year.