Fighting to learn in their language

For a miniscule community of East-Bengali origin living in in Maharashtra, it has been a long struggle for the right to learn in their mother tongue. The community has won some victories recently, and much more remains to be done. Aparna Pallavi reports.
08 April 2008 -

It is now universally recognised by child psychologists and educationists alike that the best medium for imparting primary education is the mother tongue  the language that a small child is most comfortable with. But for a miniscule community of East-Bengali refugee origin living in the forest-rich Chandrapur and Gadchiroli districts of Maharashtra, fulfilling this vital need of their children has translated into an intense struggle with an apathetic system spanning over several years. In recent years the community has won significant victories in this struggle, but it still remains to be seen if the state fulfils its obligation towards this community fully.

Between 1960 and 1985, these Bengali families, who originally arrived in India as refugees from the erstwhile East Pakistan, now Bangladesh, were settled by the Government of India in 47 villages in the tribal dominated Dandakaranya region of Maharashtra, which falls mainly in the above-mentioned two districts. At this time, 47 Bengali medium schools - one for each village - were also started to meet the educational needs of the community. 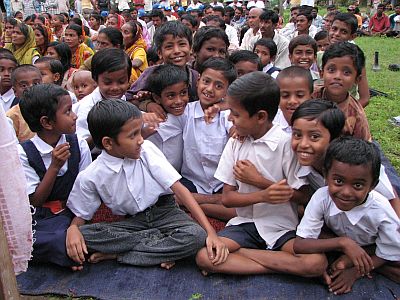 School children and parents during a demonstration to win back their schools.
Pic: Shramik Elgar.

All went well till around the year 2000-01, when quite unexpectedly the state government, through a new GR, converted all schools to Marathi medium. The Bengali community, outraged, took up the issue with the administration, but to no avail. Says Parul Banerjee, a homemaker and a resident of Ramakrishnapur village in Gadchiroli district, When we approached the zilla parishad (elected district body), we were told squarely that the government was no longer prepared to support the Bengali schools, and wanted to divert the employment generated by these schools to Marathi-speaking populaces.

Nirbendranath Banerjee, a retired school teacher from the same village, remembers that the refugee camps set up for East-Bengali refugees in Chandrapur and Bhadravati had Bengali medium schools, and in 1964, when he moved to village Ramakrishnapur in Gadchiroli district, Bengali-medium schools were already functioning here. Why should such a policy shift happen after so many years? It was clearly as a result of narrow and sectarian thinking that this move came about. The officials even hinted that it was high time we started to merge with the host community.

But the community asserted its right to education in the mother tongue as part of its cultural rights, and the tussle with the administration that followed resulted in all the Bengali medium schools being closed down in 2000-01. When the schools did open again in 2003 after a three-year closure, the primary school syllabus in Maharashtra had changed, and the new textbooks were not available in Bengali medium. A total of 4,000 Bengali children studying in 47 schools were stranded.

This Bengali community, with its current population of roughly 10,000 to 12,000 (no official figures available), has made significant contributions to the social make-up of this area. They brought with them high levels of awareness and literacy, which they have passed on to the host tribal community. Farming is their primary source of livelihood. Most of these families were given five acres at the time of settlement and some of them, along with their own farm activities, also work as farm labourers elsewhere. They introduced better farm practices in the region, which have been emulated by the tribal people. Collectively, all these things have also effectively helped curb the Naxal infiltration problem in the area.

The community has a strong sense of cultural identity. Despite years of living away from the land of their origin, they have maintained their cultural identity in terms of language, accent, food habits and even clothing. Most of the women still sport Bengal handloom saris worn in the traditional East-Bengali way, and dialects of Bangla typical to parts of East Bengal are spoken fluently. Knick-knacks with a distinct Bengali feel  palm-leaf fans, Bengali calendars and so on - can be seen in virtually every house.

But these strengths are offset by equally serious weaknesses. The settlers come from different parts of East Bengal, and lack the long-standing cultural bonds usually found in villages. The fact that their settlements are located under different gram panchayats has not helped in forging fresh bonds. Their strong cultural self-assertion has also kept them from mingling with the host community. The community is riddled with too much infighting, and to both the locals and the administration, they are known as a temperamental and trouble-making people.

According to Paromita Goswami of Shramik Elgar, a local unorganised labour union that helped them organise for educational rights, the community is also facing serious land and identity problems. While the community has been living in this area since the 1960s, their land records date back only to the 80s, which results in frequent skirmishes with the administration as well as with other local communities. Since the community is administratively clubbed together under the generic Bengali with no caste identity, the panchayat seats in their villages reserved under SC/ST categories remain vacant. Some of the families have not even been registered as voters. The administration knows that these people are few in numbers and also isolated, says Paromita, And it is hardly surprising that they choose to ignore their demands, knowing that they can get away with it.

For three more years after the schools reopened, the government did not supply the free textbooks to the schools and the children were made to study using Marathi textbooks. We could not even buy the books as they had not been printed at all, says C P Mullik, also a teacher.

When the schools did open again in 2003 after a three-year closure, the primary school syllabus in Maharashtra had changed, and the new textbooks were not available in Bengali medium. A total of 4,000 Bengali children studying in 47 schools were stranded.

This period was one of great difficulty for the students and their parents. Children continued to study in Bengali medium, but they had to use Marathi textbooks, which naturally made studies very difficult for them. Thanks to the communitys high level of awareness regarding education, there were no dropouts, but the going was very tough indeed. We just managed to pull through somehow, says Parul.

In 2006, a casual remark at a meeting alerted Shramik Elgar activists to the problem. After detailed discussions, the community decided to organise an agitation with help from Elgar. In October 2006, a demonstration of parents and children was organised at the Gadchiroli district collectors office, following which a few books were made available. But this did not meet the needs of the children, and on 11 October, a massive rally of angry parents and children entered the office of the zilla parishad in protest. We were told that the education officer was not available, but he was actually attending a meeting in the same building, recalls Paromita. The demonstrators, enraged at this evasiveness, barged into the meeting hall and demanded an audience with the education officer. When they learned that the printing of the requisite textbooks was held up for a paltry sum of Rs 1.5 lakhs, the crowd grew so angry that the frightened officials sanctioned the sum there and then, and textbooks reached every child in all 47 schools in just three days. This was the first time our community had asserted itself, says Mullik, Before this we were a faceless people hiding in our own shells.

But the communitys educational travails were not yet over. Some 121 posts of Bengali medium teachers were lying vacant in the 47 schools. After many representations failed, parents and students had to once again resort to agitation, and staged a demonstration in September 2007 on Teachers Day. Reacting to the rising pressure from the people, the administration filled some posts, but the problem arose with 31 posts in the reserved category.

As mentioned earlier, Bengalis in Dandakaranya do not fall under any caste category, and hence teachers with knowledge of Bengali as well as a caste certificate were not available. Under pressure from the people, the zilla parishad had written to the state government to de-reserve the said posts as teachers from the requisite categories were not available, but the government failed to respond.

In October 2007, two parents, along with Shramik Elgar, filed a petition before the Nagpur bench of the Mumbai High Court demanding de-reservation of the said posts and appointment of teachers. On 12 March, 2008, the High Court in its judgement, ordered the state government and the zilla parishad to fill all the posts from the open category before the commencement of the new academic session in June 2008.

Says Sudhanshu Ranjan, collector of Gadchiroli district, "The recruitment problem of teachers arose due to two reasons. The first is reservation. Now that the court has ordered that the said posts should be filled up from the open category, the zilla parishad will start recruitments as soon as a copy of the court order reaches it. We have three months till June, and I think that much time should be sufficient for filling up all the posts." Ranjan also pointed out that Bengali students who have cleared their 10th and 12th standard exams are unable to qualify as teachers as the Diploma in Education (D.Ed.) course is not available in Bengali medium.

It is so unfair to have to struggle so much just to be able to study in ones mother tongue, says Dilip Das, one of the petitioners. Be it books, be it teachers, we have had to fight tooth and nail for every inch of our space. Hopefully things will be better now, and at least some of the vacant posts will be filled following the court order.