There were about 50 counters selling seeds, plant cuttings, snacks and foods made from home-grown produce, medicinal and toiletry items again made from home-gardens and farms, all of them organic. And all, except those invited by the Malnad Forest Garden and Seed Keepers' Collective to the Malnad Mela, were women. The Malnad region comprises the hills and valleys of the Sahyadri range which is part of the Western Ghats, in northern Karnataka.

The mela was held on 10-11 June this year and has now become popular enough to be an annual affair. It is held at an old and traditional Malnad house with local hardwood pillars around a central courtyard which is now used for marriages and occasions.

The Swarna group, with 12 women from Golikuppa village, about 15 kms from Sirsi town, was set up in 2004.. They make an annual profit of Rs.10,000 from selling seeds and plants, jackfruit chips and dried bananas called 'sukkeli', made from the semi-wild variety called 'boodh balay'. The bananas taste rich, like dried figs and was first manufactured by Manorama Joshi, being dehydrated on fuel-efficient driers manufactured by ASTRA (Application of Science and Technology for Rural Areas) at the Indian Institute of Science, Bangalore. 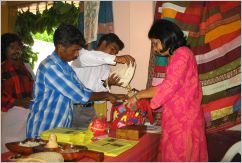 Other products developed by Manorama, all organic and from local plant varieties are cocum (garcinia indica) juice, organic holi colours which have found a big market in the cities, organic copra, turmeric and ginger.

At the mela, Vimla Joshi and Bhuvaneshwari Joshi represented the 14 women from Sonda village 20 km away. They have sold Rs.1200 worth of products in a day, profits from which are Rs.500. "Try this powder," says a smiling Bhuvaneshwari, handing a packet with brown powder that is indistinguishable. "It's sour, excellent for sambars and curried vegetables and is made from 'vatehuli'. Vatehuli is artocarpus lakoocha, a valuable multi-purpose tree native to tropical India, used for fruit, furniture, timber and feed.

Savitri Hegde, another group leader in the remote village of Mathigatta, started out by making cocum candy and herbal hair oil, and opened out her home and orchards for eco-homestays. She also has a nursery of local tree saplings and a diverse home garden, all of which she manages along with her home responsibilities.

Elsewhere around the counters of the Malnad Mela, women from around Sirsi tell me with pride about how they are making an income from their homestead gardens.

The Malnad Forest Garden and Seed Keepers' Collective is a community conservation system that is the brainchild of Sunita Rao of Hutthina Beta farm at Karkoli, about 25 km from Sirsi. Sunita, a member of Kalpavriksh who came to Sirsi from Bangalore, was struck at the amazingly rich biodiversity of the Malnad region. While the western ghats themselves are a biodiversity hotspot, home to about 350 endemic plants and 324 vertebrate species the Malnad's richness of plant and vegetable species has unfortunately not been well-researched and documented. (Source: Status And Conservation Of Bird Diversity In Western Ghats Of Karnataka, South India, A K Chakravarthy, Wildlife Institute of India. www.wii.gov.in/envis/rain_forest/chapter12.htm)

That's how Sunita decided to mobilise the women to grow, conserve and exchange seeds from their home gardens in a bid to conserve and thereafter document them. After hearing her, a friend, Kamla Hegde from Nirnahalli village 6 kms from Sirsi gave her a fistful of seeds from her home garden to start the system in 2001.

The Malnad region has a unique socio-cultural system that links communities to the forests around them.

"Initially a Kalpavriksh initiative, the network has now evolved into an independent entity with a soul of its own," says Sunita. Aside from seed-saving and exchange, the movement now pays attention to planting forest and horticultural tree species, with emphasis on water conservation.

So far there are 15 villages with approximately 150 women who are directly involved in the Malnad region centering mainly in a 30-km radius around Sirsi, in the forested belt of Karnataka's North Kanara (Uttar Kannada) district. Indirectly however, you could add another 50 villages who work through various organisations like NGOs or SHGs in growing and conserving local, indigenous flower, fruit, tree and vegetable seeds. So far, the network has saved about 150 local species of vegetables and flowers, but Sunita is sure there are many, many more still left to be got hold of, documented and saved.

The Malnad region has a unique socio-cultural system that links communities to the forests around them. Predominantly agricultural with areca nut as the main crop, farmers also grow paddy, pepper on the areca nut trees, cardamom and spices, including the newly-introduced vanilla, besides growing all their own home needs. Each house has a homestead garden surrounding the house with vegetables, flowers and fruit trees.

The homestead garden then joins up with the 'soppina bettas', or forest lands given since British times to areca farmers to source leaf litter for mulching their areca trees. The British didn't want the areca, but the pepper that grew on it trunks, and now the farmers are unwilling to give up this privilege though the forest department has tried to wrest the lands back. 'Betta' lands at the ratio of nine acres to every acre of areca, are 'given' to the areca land-owner on the legal condition that he cannot alienate the land for any other purpose; it can be passed to his descendants or divided between brothers and he can build a home on it for his own use. Ownership of the land lies with the forest department. Other than a few unusual cases, most betta lands are unencroached and generally used for the areca's purpose.

Unfortunately, betta lands are now degrading because of overgrazing from farmers' cattle and over-lopping of tree crowns and branches for litter severe enough to stunt their growth. Furthermore, women, traditionally in charge of homestead gardens, have lacked enough awareness to realise that they need to conserve their seeds because of their unique qualities. The 'magekai', for instance is a fat, watery cucumber that has a year-long shelf life when plucked, with most homes just leaving them strewn on a cold floor.

The betta lands are, in their turn, surrounded by reserve forests, thus making the entire fabric of living connected to the forests. "It still remains a self-sustaining system," says 63-year-old M N Hegde, a sprightly areca farmer known for his environmental philosophy of life.

But with smaller farmers now barely able to cover costs with the produce they take to market, including areca, yet needing money for clothing, children's education, marriages and other functions, farming even here is in crisis, says Sunita. "Encouraging women to keep alive their seeds for kitchen use has thus become a food security issue," she says.

The women grow local and indigenous amaranthus, cucumber, paddy, ragi, various greens, gourds, and flowers like the endemic 'shankpushpi'. Seeds are kept in cloth bags above the kitchen stove to keep them free from humidity, or kept submerged in ash inside earthen pots to be used each season.

So far, around 60 local flower species and 150 vegetable species have been conserved. Over 2000 packets of organic, open-pollinated seeds have already been distributed. The network meets three times a year to catch up through a training meet, or have fun at an outing, or exchange seeds and sell produce at the annual 'mela'.

"We have now reached the stage where we need a central 'seed docu-bank'," says Sunita. "All these seeds are at different villages now, they need to be collected and documented, that's the next step," she says.

The local MLA, Vishweshwar Hegde (Ankola, BJP) from Kaggeri village, attending the mela along with the local Member of Parliament, Ananth Kumar Hegde (Canara, BJP) acknowledges that the women's network is now a fair force that the government is now recognising.

"The government will be building 'bhavans' or community halls in 50 taluks in the district. The women can use these halls for their purposes," says Hegde.

Vishweshwar Hegde however believes that India's new Seed Act will prove an impediment to the dissemination of saving local seeds and species. Sunita believes that local initiatives such as hers, one of several small ones countrywide, mostly in agricultural rather than home-garden seeds, should not fall afoul of the new Act which does allow farmers to conserve their own seeds, as long as they are not branded commercially.

But the Green Foundation at Bangalore, also working on saving indigenous agricultural seeds is quite upset at the new Seed Act's provisions which prohibit small farmers from selling and exchanging seeds, as well as bogging them down with a host of certifications needed for their seeds. The farmers are thus discouraged by the host of rules to take the effort to save local seeds.

Indirectly, says the organisation, the Act is thus impacting negatively on biodiversity. Repeated protests at various fora have so far not been heeded by the central government. MLA Hegde also echoes the inability to get the ear of the central government on this. "The Act in its present form will not allow this network to expand," is his opinion.

But no matter which way India's policies are heading, the underlying purpose of the home garden programme as a community conservation initiative for the preservation of genetic diversity, organic agriculture, health and ecologically sensitive livelihoods from sales of home-produce will be a force to reckon with, if the network remains committed.