There is no data at the constituency level about how the development indicators have changed over the tenure of the local elected MLA or MP. Veena Ramanna reports.
04 October 2011 -

As the Gujarat election approaches next year, there is already a lot of political posturing that we are beginning to see. The fasts of Narendra Modi and Shankar Sinh Vaghela are just the beginning of a long process of contestation based on identity, political rhetoric and some claims of performance or the lack of it.

A quick look at recent election speeches across political parties reveals that there is almost no mention of the specifics of performance by the incumbent MLA candidates or focused attacks on lack of development by the local opposition candidates. At the local constituency level, all this leaves the voters with some vague perceptions about the development that might have taken place during the last five years in the constituency.

In an age of better education and information dissemination capabilities, one would assume that voters would in fact like to see specific data on performance. But how do they actually get to see and measure how their leaders are performing?

The difficulty lies in part with our political culture, but equally it is due to the fact that there is no data at the constituency level about how the development indicators have changed over a five-year tenure of the local elected MLA or MP. The only data that gets collected is used more or less exclusively by the bureaucracy to track the implementation of schemes, and this happens along taluk and district boundaries, rather than the boundaries of election constituencies.

In such a situation, the local representative is unable to demonstrate in a tangible way whether there has been any progress on education, employment, health, etc. in his constituency. And when the neta does not perform well, the local opposition candidates have no way of highlighting under-performance in this constituency compared to the neighbouring constituencies or the state averages. Citizens and NGOs have no objective way of negotiating with the local MLA to use his good offices to persuade those in power for greater focus on the constituency even when it genuinely lags behind on development indicators. 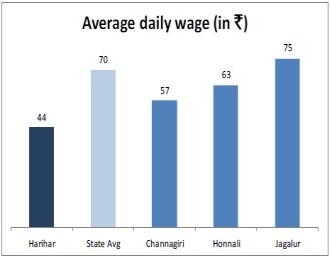 The only data that gets collected is used to track the implementation of schemes, and this happens along taluk and district boundaries, not election constituencies. (Click on image to see data from all constituencies in Karnataka).

Similarly, the data on employment provided for SC/ST populations is striking. If one were to assume that SC/ST populations are more likely to be socially and economically deprived, a scheme such as NREGA should attempt to correct these deprivations by providing greater opportunities to SC/ST populations. In many of the constituencies analysed, the average employment provided to SC/ST households is lower than the non-SC/ST households. This is even more shocking, when one observes that in some constituencies, this apparent discrimination is very pronounced. What is perhaps equally disappointing is that this is true even in some of the MLA constituencies reserved for SC/STs.

There are several other parameters that are very important in the overall scheme of things in MNREGA implementation. For instance, the Act states that "... the cost of material component of projects including the wages of the skilled and semi-skilled workers taken up under the Scheme shall not exceed forty per cent. of the total project costs ...". However, some MLA constituencies appear to have not adhered to this norm. Detailed data along MLA constituencies can be accessed here.

How does one look at such analysis and data in the overall context of our politics? Clearly, the MLA is not directly responsible for execution of any of these schemes. But it is well known that MLAs are on various committees at the local level to oversee the implementation of a number of schemes. If the data is available to MLAs in a timely manner, then it would be possible for them to raise pertinent questions to correct any distributive inefficiencies.

It is very likely that our MLAs do not know the actual data for their constituencies on any development indicators, simply because the government does not organise the data along MLA constituency boundaries. It is also possible that when MLAs (and some people in government) look at the data, they may dispute the accuracy of the government figures that form the basis of this analysis, which in turn may lead to better quality data being put out by government.

It is also possible that local media, NGOs, political opponents to the incumbent MLA will all try to use such data to point out to the lack of progress in the constituency. But that is precisely the desired outcome of such reports. Elected representatives are accountable to the people, and when tangible data is published that can show the progress in the constituency, competitive politics will ensure that the data will be used in the local debates.

This does not spell the demise of identity politics or the use of political rhetoric as an election tool. Rather, this will infuse the much needed sense of focus on performance of the constituency using objective government data during the term of an MLA. This is certainly the direction in which many youngsters would like our politics to move towards in their lifetimes.