Jyotsna Sitling's gargantuan assignment involved ridding a buffer zone of the Nanda Devi Biosphere Reserve in Uttarakhand of mountain-high piles of plastic and non-biodegradable waste, dumped by pilgrims over the last three decades on their way to Hemkund Sahib. She elicited the help of the community and did it, reports Neeta Lal.
12 July 2007 -

Uttarakhand (WFS) - She has done exemplary eco-restoration work in the Himalayan state of Uttarakhand, helped the Valley of Flowers National Park in Chamoli achieve World Heritage Site (WHS) status and set in motion a unique conservation movement that has helped save the ecologically fragile Nanda Devi Biosphere Reserve.

Meet Jyotsna Sitling, 45, the diminutive but proud recipient of this year's prestigious Indira Gandhi Paryavaran Puraskar, the country's highest environmental honour. An Indian Forest Service (IFS) officer from Kalimpong (West Bengal, 1987 batch), Sitling - an avid trekker and nature lover - came to Uttarakhand as the director of the Nanda Devi National Park (NDNP) in 2001. (The Nanda Devi reserve has two parks - the Valley of Flowers National Park and the Nanda Devi National Park.) Soon after taking over, the conservationist launched a vigorous campaign to save the park from rampant environmental abuse. 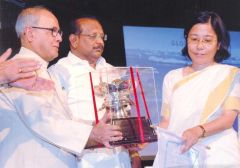 Sitling's gargantuan assignment involved ridding the Nanda Devi Biosphere Reserve's 19-kilometres buffer zone of the mountain-high piles of plastic and non-biodegradable waste, which had been dumped by pilgrims over the last three decades on their way to Hemkund Sahib. But this could not be possible without local support so she painstakingly evolved a community-based waste management programme.

This was crucial to save the ecologically sensitive and unique Valley of Flowers National Park. The park stretches along the trek route from Govindghat to Hemkund Sahib. The irresponsible behaviour of the annual traffic of 600,000 pilgrims on this route had wrecked its beautiful surroundings, resulting in the accumulation of tons of putrescent garbage (plastic bags, bottles, rain coats and sundry packets) and other non-degradable waste.

"Initially, it was difficult to motivate people for such unglamorous work. But since it could never have happened without community participation, we just plunged into it," says Sitling. For starters, Sitling cobbled together an eco-development committee (EDC) comprising locals, and hired garbage collectors, who worked for a monthly salary of Rs.1,000 with an additional commission of Rs.5 per garbage bag. After working tirelessly for 14 months, Sitling's ragtag team collected whopping 44 tonnes of garbage in 14,000 gunny bags! Tonnes of mule dung were also collected, as about 500 mules make daily to-and-fro trips during the five-month pilgrimage season. "The collected garbage matched the surrounding mountains in their height!" laughs Sitling.

The irresponsible behaviour of the annual traffic of 600,000 pilgrims on this route had wrecked its beautiful surroundings, resulting in the accumulation of tons of putrescent garbage (plastic bags, bottles, rain coats and sundry packets) and other non-degradable waste.

The filth was then transported on horseback to Govindghat and then to Delhi for recycling. And despite the magnitude of garbage, no short cuts like burning or burying were resorted to.

But cleaning up the area was only a part of Sitling's daunting mission. Her greater challenge lay in convincing the resident business population - about 76 families in all - to demolish their 400 shacks and morph them into 76 shops - one shop per family. This, Sitling insisted, would help in the better management of the ecologically sensitive area. After much convincing, they agreed to convert their ugly shacks into well-equipped shops with proper infrastructure.

But that wasn't enough. What complicated matters was the fact that the buffer area shared by the two parks the Nanda Devi Biosphere Reserve - was a crucible for 47 villages. Both parks, administered by the state government under the wildlife wing of Uttarakhand's Forest Department, had been subject to reckless mountaineering activity from 1939 onwards. Anticipating ecological disaster, the Centre shut down Nanda Devi for all anthropogenic activities in 1983. Since the popular peaks scaled were mostly within the Park, the directive deprived the villagers of their income through mountaineering services. "The conflict of interest between the state's conservation strategy and local livelihoods led to an estranged park management-public relationship for over 20 years," explains Sitling.

To make matters worse, the Valley of Flowers National Park - 87.5 sq kms ensconced within the upper Himalayan ridges at a height of 3,200 to 6,675 metres - had its own set of conservation concerns, a shame considering it is one of the world's most scenic alpine valleys. Close to 520 species of flowering plants and rare avifauna like the Scaly-bellied woodpecker, Great Barbett, Eurasian Eagle Owl, Spotted Dove and the Blue Magpie can be found here.

"The task was Herculean," remarks Sitling, "Especially since the area's ecosystem was in tatters and motivation low amongst the locals." Moreover, the work required synergy between multifarious agencies and involved sensitive livelihood and ecological issues. That was the main reason behind Sitling's department advocating a participatory approach. They crafted "mini pockets" of 40 'van' (forest) panchayats and 60 'mahila mandal dals' (women's group squads) to "make conservation a socially and economically self-alleviating experience for the locals". "The idea was to integrate livelihood and equity concerns in conservation practices for a long-term solution," says Sitling.

Training was imparted to the community to harness local resources and develop eco-tourism activities. Growing and preserving of medicinal plants, exotic condiments and traditional crops were listed as a priority. This stimulated the avenues connected with the hill economy, which helped prevent poaching and illegal uprooting of herbs from nearby forests. Communities were also encouraged to document and preserve their culture and folklore. Local youth were developed as a skilled human resource on local bio-diversity, folklore and culture promotion.

The forest department's pioneering efforts towards environmental protection and conservation through community participation were recognised in 2004 when the state's then chief minister, N D Tiwari, bestowed a state award on Sitling on 5 June, World Environment Day.

Years of hard work started to bear fruit when the region's ecosystem, too, demonstrated signs of regeneration. Sitling's department nominated the Valley of Flowers to the UN's World Heritage list in 2002 by submitting a proposal to the World Heritage Centre. After the proposal was submitted, the UN evaluation team visited the Valley of Flowers National Park and Nanda Devi National Park in September 2004 to assess the conservation status, its management strategy and the community interface in the conservation of the two parks.

On 14 July 2005, UNESCO informed Sitling of the conferring of World Heritage Status to the Valley of Flowers National Park. Apart from it being a global honour, the WHS status has had other positive spin-offs for the valley as well. It has helped Uttarakhand attract a lot more international tourists and global conservation funds.

"Our unique experiment," discloses Sitling, "has shown that there's nothing which can't be achieved if people choose to work together, no matter what the obstacles." (Women's Feature Service)

Neeta Lal is a freelance writer based in Delhi.