Look beyond the food

Most studies on mid-day meal schemes tend to focus on the obvious nutritional benefits or lack thereof. Carly E Nichols argues that the impact of these programmes extend far beyond, justifying the need to fund and monitor them more stringently.

In the hill villages of Nainital district in Uttarakhand, one would rarely find instances of outright hunger or severe acute malnutrition (SAM) of the kind documented elsewhere in India. I recently conducted two months of intensive fieldwork in five villages across Dhari and Ramgarh blocks. With the support of two local field assistants I interviewed 70 households and various institutional actors on their perceptions of food and nutrition security. Over the course of this fieldwork, I found that cereal scarcity was rarely, if ever, a pressing problem among these hill communities. What was lacking, instead, was the time necessary to prepare such food.

Women in the hill areas have long been known to have egregiously high work burdens, often rising at 5 am and working continuously until 10 pm with hardly 30 minutes for post-lunch rest. Moreover, the nature of much of the work is physically exhausting - gathering fodder and fuel wood from the forest, hauling water from as far as a kilometre, attending to the animal husbandry tasks, and a great proportion of agricultural labour.

This means that when it comes to attending to the traditionally socially ascribed roles for women, such as childcare, housework, and cooking, these women often lack the time, energy, or both. In fact, a primary complaint when we discussed poor feeding practices or instances of food deprivation was that meals either "got late" due to too much work outside the home or that it was hastily and shoddily prepared, making it less appealing to everyone, especially the children.

Most studies have primarily judged the MDM programme by its regularity and the quality of the food distributed. While this is of course important, such an approach overlooks the relatively invisible benefit of both programmes in making women's workload lighter through provision of childcare and food preparation. This is of vital import, particularly in the hills where women are also in charge of other productive activities. In addition to assisting women with work, the Mid-Day Meal (MDM) scheme and anganwadi centres (AWCs) are successful in several other crucial ways, for example, in reinforcing nutritional knowledge and creating a sense of community among children. 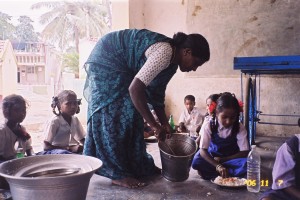 While the food was good and children happily ate it, equally important was that it was one task less on the long list of morning chores for women. Programmes that work to reduce womens work burden in this area contribute to the overall food security of the family.

This is why I was so impressed with the functioning of both the MDM programme and the AWCs run under the Integrated Child Development Scheme (ICDS) in these areas. Both served not only to provide nutritious food to children, but gave rural women much needed employment opportunities, promoted a sense of community among children, and perhaps most notably, acted as a direct aid to lessen the heavy work burdens of women in rural areas.

I found that it was this latter point that had the deepest impact on food and nutrition security, and coincidentally, is perhaps the least recognised benefit to families from the programmes. While the food was good and children happily ate it, equally important was that it was one task less on the long list of morning chores for women. Programmes that work to reduce women's work burden in this area not only contribute to the overall food security of the family, but make a deeper impact by providing a public subsidy to the huge amount of 'invisible' or unpaid labour that women undertake every day.

This aspect of the MDM scheme can be brought out through a simple comparison between children who went to government-run schools and those who attended private schools. Children in the latter group were required to bring packed lunch with them, which required a female in the household to make extra chapattis in the morning and additional subzi. While this task may not sound so difficult, under the circumstances, it may be quite troublesome. Morning is a hectic time in the village household, when animal chores and morning fieldwork is being done, rooms are being swept, and children are being bathed and helped to get ready for school.

Due to this excess of morning work, a common practice to save time is to only make chapatti and eat leftover subzi from the previous night for the morning meal. When that is the norm, rarely is there enough to also supply the child with an adequate daytime portion. Consequently, large numbers of kids end up bringing 2-3 rotis to school with a 'subzi substitute,' typically in the form of pickle, jam, or sugar. Another common replacement for a lunch of subzi-roti is Maggi instant noodles or other packaged food from the shop (for example, biscuits).

A visit to a couple of private schools also revealed that it was not uncommon for at least one or two students to 'forget' their lunch-pack at home, in which case they either had to share food with a friend or simply not eat at all. This had two important effects: one, the student ate much less than what was required and two, those who did not bring food were singled out, and often ostracised, teased or made to feel bad.

Another undesirable concomitant of home-brought lunches is that they tend to divide school kids on socioeconomic lines - more expensive (yet, often less healthy) shop-bought food is almost always seen as superior to home-cooked lunches, and always better than bringing nothing at all. In comparison, the kids at the government schools always had lunch, and most importantly, everyone ate the same cooked food, which was helpful in downplaying socioeconomic differences between the children. In addition, the food was good and all of the kids beamed as they recalled it.

Bhojan matas in charge of preparation are also excited by an opportunity to earn extra income while still being able to take care of their agricultural fields. They are empowered by the knowledge and respect which they have gained for being responsible for feeding the school kids. One bhojan mata grinned widely as she commented that parents would come to her and ask her how she prepares the food as the kids will not eat home food, but excitedly talk about school food.

Households also commented on this. Several people pointed out that because kids are served a different type of daal in school every day, they are demanding more diverse food options at home as well. While daal-chawal was the standard daily fare, kids and parents also noted it was not uncommon for there to be subzi, on occasion eggs, and either halwa, kheer, or some other sweet once a month.

In addition to the bhojan mata, the positions of AWC teacher, AWC sahayika (helper), and Accredited Social Health Activist (ASHA) are some of the only viable employment opportunities for married women in this rural area. When properly trained and given adequate support, I have seen such women act as key figures in helping improve village health and nutritional practices.

At the same time, it is a fact that the salaries for these positions are very low, and thus care must be taken in ensuring that these jobs are not exploitative of women. It would be a powerful commitment on the part of the government to make salaries more reflective of the importance of these women's work, as they are essentially helping to shape the future generation's health and nutrition.

The reason I have focused on the MDM scheme is that there is a common complaint within India, and increasingly so in the wake of the Bihar tragedy, that the food served under the scheme is of poor quality and not suitable to be given to children. While the incident in Bihar is certainly tragic, I fear that a single-track discussion on those lines may detract from the positive effect that MDM has had in so many other areas, including the area in which I studied.

In my study in Nainital district, not only did the MDM programme function well, it effectively targeted the poorest, most marginalised segments of society by being available to those who could not afford to send their children to private schools, a finding that has been noted elsewhere. If anything, the incident in Bihar should serve to re-energise policy makers about properly funding and monitoring the scheme, to ensure that the success prevalent in some places is replicated across the country.

While a more lasting and long term solution to women lacking the time and energy to prepare food is to challenge and question the patriarchal norms which put them in such a position, this is a change that will happen only slowly and with persistent efforts towards awareness building in society. However, in the short term, any government program targeted to reduce the labour burden of women will inadvertently also be improving her ability to properly perform her tasks and enhance the overall food and nutrition outcomes within the family.

Thus we can see that MDM and also ICDS are much more than food distribution or supplemental nutrition programs, they are also direct investments in the productive capacities of women and their families.

Carly Nichols is pursuing a Masters degree at the University of Arizona, USA in the School of Geography and Development.