Can PM Modi pull it off?

The aggression and pace of the new government’s decisions and activities relating to national security, just as in other areas, may be due to the eagerness to prove itself different from a sloth, ineffectual predecessor. However, the image that it creates comes with its own set of risks, writes Firdaus Ahmed.
31 October 2014 -

The new government is only following on the footsteps of its predecessor, but with a difference. While Manmohan’s Singh’s government built national defence sinews, it apparently went about it with a longer time-span in its mind. In the interim, it reckoned it needed to keep the neighbours on both fronts placated through talks or the promise of talks. However, the new government, in speeding up the activities around national security, may be putting too much on its plate all at once. Will it be able to pull it off?

That it is in fast forward mode is understandable to an extent. Externally, there is avid interest in the new complexion of things, an interest that can only be sustained by an India demonstrating that it is doing things differently. Internally, it wants to prove itself different from its predecessor.

There are electoral gains to be made by such a display, the wins in Maharashtra and Haryana have demonstrated as much. There are other states on the chopping block: Delhi and J&K. Finally, its new national security team with the redoubtable Doval in charge is in a hurry to put in place the ideas that they spent the last decade propounding from perches in think tanks.

The seeming hyper-activity is visible in the priority given to defence. Modi, in keeping the ministry without a full-time head, is broadcasting that it is his key result area. Major decisions have been reached in a time the previous government would have taken a whole term over to do, such as on the proportion of foreign investment in the defence sector and purchases amounting to over $30 billion. 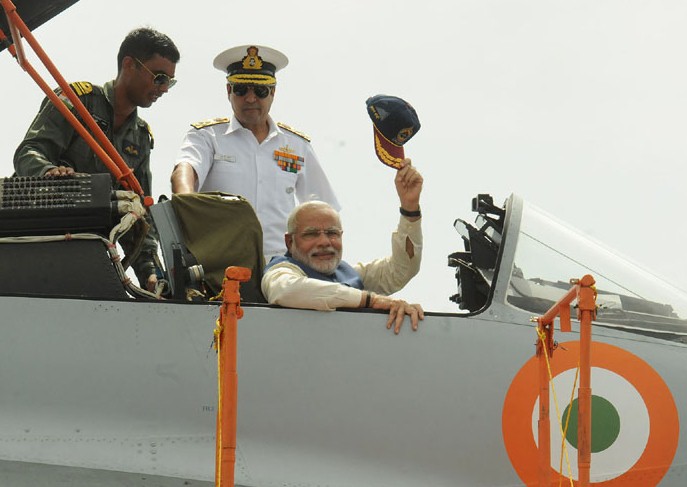 PM Narendra Modi waves from the cockpit of a MIG-29 on the deck of INS Vikramaditya, India’s largest warship, in Goa (June 2014). Pic: Press Information Bureau

Road building activity along the China border and setting up of paramilitary border posts along the Arunachal border are instances of acceleration. Approval of the national war memorial and visits by Modi to military formations, including his Diwali hop over the Khardungla to Siachen, are the more mundane examples.

More consequential is the broadcasting of intent to its potential adversaries, Pakistan and China. By cancelling talks, the government has put Pakistan on a clear notice. By wielding a sword in addition to a shield, as the defence minister put it, Pakistan has been conveyed a message of deterrence.

On the China front, the national security adviser at the Munich Security Conference in New Delhi ruled out a compromise solution on the border involving territorial concessions. India’s position in China’s ‘containment’ has come to acquire considerable heft in India’s exchanges with the US, Japan and Vietnam. This, alongside having a mountain strike corps out of its infancy, gives India the confidence to ‘stand up’ to China, if not tell it off.

The upshot of these moves has been evident in the response. From Pakistan it is as expected. Not only has its national security adviser rejected any Indian attempt at ‘hegemony’, but its maverick former dictator, Musharraf, has gone on to say that Pakistan would not hesitate to use nuclear weapons if push comes to shove. China has also been equally clear, telling India not to build border roads, but also keeping its forces in eyeball to eyeball confrontation at Chumar even while its president was in Ahmedabad and Delhi.

The messaging between the states can be taken as one of deterrence. A new government in power is drawing the line and adversaries are reciprocating in kind. Thereafter, if it is back to business, then it would indeed be Doval, and at one remove, Modi, ‘pulling it off’. The metrics for this would be resumption of the interrupted dialogue with Pakistan and tying down China with investment in India’s infrastructure.

Commentators, fearful of India overheating, have rightly advised caution. Strategic rationality may indeed dictate thinking in Sardar Patel Bhawan, site of the National Security Council Secretariat. However, what miss the strategic eye are internal political compulsions. The earlier government had right wing BJP looking over its shoulder. This time round, minus an effective opposition, the government has a more far-right flank to worry about. How does this impact strategic calculations and how can it render them awry?

Firstly, the government has dug itself into a commitment trap by creating a certain image of itself, based on electoral calculations. It would, by default, require being violently responsive in case it is tested by a mega-terror attack. This has the potential to throw a spanner into its grand strategy of economic development, quite as desired by those who may manipulate such a terror strike.

The Israel model of ‘mowing grass’ in Gaza or in Hezbollah dominated areas in Lebanon would not hold good in India’s attempted taming of Pakistan. On a wider regional level, the competition can expand territorially, moving from playing out in Afghanistan currently to engulf the expanding arc of instability till the Mediterranean; in fact, there was a suggestion during Modi’s US trip that India was somehow needed in that area.

Secondly, since the government has nothing to offer Pakistan through talks and has lost in Sharif an interlocutor to proceed with these in any case, it cannot but continue having a tough line on Pakistan. This situation has the potential to yield internal political dividends in keeping India’s largest minority on the defensive through working of the contrived linkage between India’s internal ‘Other’ and its external ‘Other’.

This will enable space for the regime, with its supportive quasi-cultural organisations, to go for more than merely an economic reset of India over the next ten years. Modi has declared an intention to stay in power. In case of another outbreak of the ‘troubles’ in Kashmir, India may well revert to the period depicted in the film, Haider.

Thirdly, in the self-confessed nationalist government’s prioritisation of national security lies incipient militarism. Militarism and nationalism are a heady mix. While the ‘Modi wave’ has put him in the saddle, those who contributed to his victory have their own impressions of the victory and their role in it and their own agendas. He has either to give them their share of flesh or else get diverted to taming them.

From the manner in which the ‘love jihad’ campaign has played out and the blatant manner in which riots have erupted, most recently in Trilokpuri, it is clear that he has chosen ‘live and let live’, perhaps because it is ideologically agreeable. This implies that having chosen to ride a tiger, he will unlikely be able to get off. The trajectory of emergent states with such polities suggests both internal and external trouble ahead.

Finally, the picture above of strategic rationality being upset by political extremism may overshadow another likely source that the threat could spring from. It could instead come from within the strategic fraternity. Ideology driven strategy tends to be insensitive to the limits of power. Having been kept dormant by a liberal-realist combine at the helm for so long, the strategic subculture comprising hawks who have been closet cultural nationalists all along may come to the fore. They are liable to take jargon such as ‘massive’ nuclear retaliation and ‘decisive’ conventional victory at face value.

Intent on turning back time by a millennium, this section shall push to take India across the Hindu Kush, if not to Mount Kailash. These shall be the Trojan horses of Hindutva who can upset Doval’s applecart, assuming he is different.

If the Prime Minister is indeed to pull off the foreign and security policy he has put in place as first step, he needs to get firm with the far right as his next. It would be a case of the leopard changing its spots. With the majority he has, he can. But the question is, will he?