Sunburn warning for India’s day in the sun

India’s foreign policy moves under the Modi government have so far been aggressive, but sustaining the heat on the external front without a resolution of critical internal and regional positions comes with its own risks, writes Firdaus Ahmed.
22 September 2014 -

Recent commentary on the succession of visitors to New Delhi and of New Delhi’s own foreign visits, both by the high profile prime minister and the minister of external affairs, makes this juncture the high noon for foreign policy analysts. The commentary mostly luxuriates at New Delhi’s recently found status as a capital worth courting.

Strident commentators such as Brahma Chellaney, taking cue from the prime minister’s visit to Japan and the impending one to the US, are pushing for strategic partnerships, more than just titular ones, with both. More sober analyses, such as that of Rajesh Rajagopalan, warn that being the cynosure is not easy. While India need not be a bashful bride, it would nevertheless need to watch the suitors carefully.

Thus far, it was Pakistan’s location that led it to be courted and it took full advantage of this as the ‘frontline’ state. It now appears to be India’s turn. However, in Pakistan’s case its day in the sun came at an all-too-evident cost to itself, though the allusion to Pakistan can superficially be countered by stating that the analogy is somewhat stretched.

Pakistan’s army had distorted that state. The state was too small and in a state of asymmetry with its strategic partner, the US. Its internal politics has been delicate all along. These differences from India make the Pakistan example fatuous. Therefore, the expectation is that India’s impending experience as a pivotal state would somehow be different.

Commentators have rightly warned that treading between all those courting it will not be easy. However, they do so in the light of foreign policy. Finding a way between being non-aligned and being aligned to the democratic bloc is the challenge. However, the threats are not all necessarily in the strategic and external domain. These can also be from within.

Setting our house in order

Blindness to these is unremarkable in foreign policy analysis since it is mistakenly seen as distinct from the internal sphere. This is a fallout of the early split between international relations and political science scholarship in the west, one that India has imported into its universities. Consequently, the two look different ways, the former inside and the latter externally. This leads to foreign policy analyses overlooking otherwise consequential internal factors.

The first overlaps both internal and external domains: Muslims in India. While the prime minister has finally got around to complimenting Muslims for the first time publicly in his acknowledgment, saying they are ready to die for their country, it appears tactical coming as it does on the eve of his visit to the US. The wider political position of his party over the past three decades and its supporting formations over the past century suggests that India’s minority question is significant.

The ‘othering’ of the minority has two aims: one to consolidate the majority into a bloc, a strategy that has recently yielded political dividends at long last; and secondly, to retain upper caste dominance by enabling vertical integration within Hinduism. Dominance, to repay the minority for a millennium long humiliation, is a project underway, the most recent manifestation of which is the ‘love jihad’ insinuation. All this could have remained exclusively internal factors, but for Pakistan as neighbour.

Pakistan’s very presence and actions such as proxy war makes it more than merely an external factor. Just as the recent contretemps surrounding the cancellation of talks with Pakistan indicates that Kashmir is not quite an internal issue alone. Pakistan’s shadow also looms large over periodic allegations of penetration of Islamist forces into India. The prime minister’s belated dispelling of the notion is too little, too late inasmuch as the manufacturing of public perception by his party and its supporters goes. Pakistan is therefore the ‘other’ outside, one that needs domination. 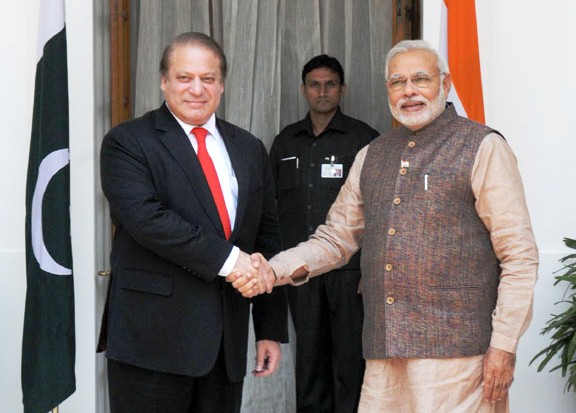 This internal-external linkage, contrived by the ruling party for getting to power, sets the stage for the chickens coming home to roost. India is exerting itself to overawe Pakistan by its economy-backed military strides. This can form India’s Achilles heel in case it comes to blows, a not unlikely eventuality in the light of past precedence and the heating up of the regional strategic scene in the likely departure of the US from Afghanistan. In one fell swoop, India will cease to be a strategic player at the Asian level, falling back into its regional box as a regional power. 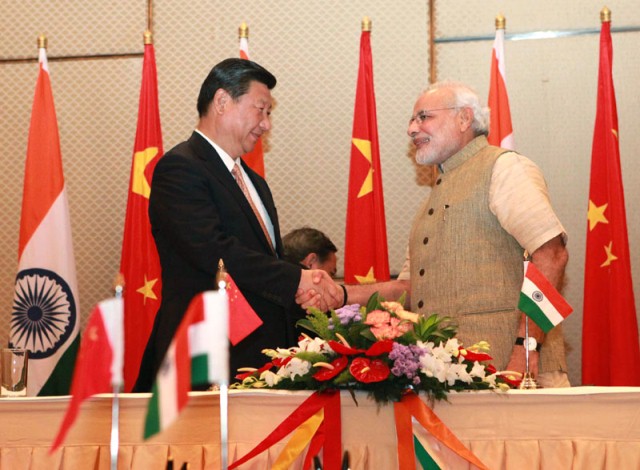 Even in the game on the Asian geopolitical chessboard, India can be tripped up easier. China will have a readily available lever if it finds India as a part of a ‘ring of democracies’ bent on containing it. India has sought to deter China on this front. While Xi Jinping was in India, President Mukherjee landed back from a visit to Vietnam, India’s forces were staring down the Chinese in Chumar, its military was set to exercise with US troops in the Kumaon Himalayas, and Mr. Modi was packing for his US trip.

While necessary, all this may not be enough. India has, therefore, to do something more if it is to perform at a higher strategic level, numbering with the US, China and Japan. It has to first set right its place in the region. One way is the manner it is currently set about: overawing Pakistan.

Cancellation of talks and the manner in which it was done are India’s suggestion to Pakistan to read the strategic tea leaves and drop its insistence on hyphenation with India. The impetus behind this policy, being a piece of the position of the Sangh Pariwar, owes much to internal politics.

It is this that  makes the Pakistan analogy relevant. Internal political compulsion, in this case resulting from an ideology rather than institutional interest as in case of Pakistan’s army, have a tendency to drive foreign policy down undesirable paths.

The problem is that in India’s case this is not about to change. The strategy can only be upgraded, for instance with Mr. Modi decisively weaning the US away from Pakistan. Therefore, the thorn in India’s side can only remain, and so will the possibility of India’s tripping up even as it reaches for the stars.

What needs to be done instead? Alongside the widening asymmetry with Pakistan, India can attempt to incentivise Pakistan to give up confrontation. India has all this while been attempting to increase the asymmetry to levels from which it can make such an offer. However, diplomacy should allow for Pakistan to ‘save face’ by giving up its hope for parity with India. While this can and should be done, it is not necessarily the path India will likely take.

The upshot is that navigating India’s path between China and Russia on one side and the US and Japan on the other is not going to be easy. India has in its regional security choice made this even more difficult for itself. With so many balls in the air all at once, time might just send this particular one crashing down.

Firdaus Ahmed is a freelance writer on strategic and security issues.