The deadline for public comments from the draft National Environmental Policy expires on Oct 31. Sudhirendar Sharma reports on the context for the development of this policy and what it may portend.
01 October 2004 -

The framing of draft National Environment Policy (NEP) 2004 came as a big surprise to many. First, the Common Minimum Program (CPM) of the UPA government does not make any mention of it. Second, the drafting itself was closely guarded. Reliable information indicates that work began during the time of the NDA government to respond to the collective voice of the Chief Ministers of NDA led governments in the States who were piqued by the delay in executing projects on account of detailed environment clearances.

It is now clear that the task of drafting NEP was assigned to TERI, formerly the Tata Energy Research Institute, renamed as The Energy & Resources Institute. In fact, much before the NEP draft was announced, environmentalists had got an inkling that the TERI was framing a policy for the Ministry. Representations were made to the Ministry to make it public and involve other stakeholders. However, there wasn't any response.

By why a policy now? It seems the intention has been to draft an overarching policy that encompasses provisions of all previous legislations, even if it at the cost of duplicating the previous efforts. However, the draft policy has an obligation towards articles 48 A and 51 A (g) in the Constitution that calls for national commitment to a clean environment. But hasnt such commitment been already reflected in the existing air, water, forests and wildlife protection policies and Acts? While acknowledging the inadequacy in existing regulatory regimes for environmental conservation, the draft policy resents long delays in executing developmental projects on account of such regulations. 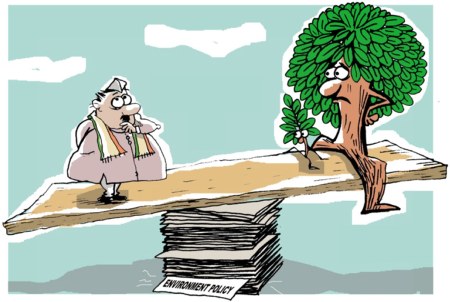 Resentment over delays has been expressed by several state chief ministers in the recent past. At a recent conference, state environment ministers had argued that the environment clearances for projects should be within the jurisdiction of the states. Not only has this been reflected in the draft, it has been suggested that all existing legislations (mostly Central ones) be reviewed to eliminate obsolescence and amalgamate provisions with similar objectives, in line with the draft policy, such that delays in project execution and subsequent cost escalations could be averted.

There does not seem to have much transparency in the drafting of policy document itself. As mentioned earlier, the drafting was closely guarded, leaving room for speculations on its intent. To cover up, the released draft seeks spirit of partnership, of individuals and institutions, towards maintaining and enhancing the quality of the environment. The draft has been placed in public domain for two months for soliciting comments. The Centre for Environment Education (CEE), a nodal agency of the Ministry of Environment & Forests, has been asked to coordinate feedback against a October 31, 2004 deadline. But no format for the feedback has been specified.

UPA's CMP
The CMP makes no mention of an overarching environmental policy. It merely says that the administration "will take all measures to reconcile the objectives of economic growth and environmental conservation, particularly as far as tribal communities dependent on forests are concerned."

At places, the draft policy is good on words but not intent. The document is seized of the fact that the countrys rivers are in pathetic state owing to excessive withdrawals, increasing pollution and inefficient water use. However, in terms of action plan to revive them the policy document gets trapped in the rhetoric of the dominant prescription that has neither worked in the past nor is likely to produce desired results in the future.

What is the bearing of this policy draft on the proposed interlinking of rivers? Even without flipping through some 15,000 words in the policy statement, one could be sure that the policy may not impact, in any manner, the controversial interlinking of rivers decision thrust on the country. Outwardly it may seem that the UPA government has been more cautious on its pronouncements on the interlinking proposal. But the fact is that neither has it been able to take a decision on the future of the Task Force nor has it categorically dumped the proposal.

Until the Task Force is reconstituted with a fresh terms of reference, it could easily be assumed that though underplayed, the proposal on interlinking is alive. Furthermore, the Ministry of Water Resources has reportedly briefed the President on the progress a few weeks ago; the government's response to the Supreme Court is due anytime now.

Furthermore, in a political charged environment where inter-basin transfer is being considered the dominant mantra for addressing regional water scarcities, the policy is conspicuously silent on the subject. Tangentially opposite to the existing paradigm, the policy document advocates integrated approaches to management of river basins by concerned river authorities knowing well that idea of setting River Boards have long been defunct. Much like the National Water Policy 2002, the draft environment policy plays ignorant to the goings-on on the ground.

The draft tosses up lofty ideals like greater legal standing to local community based organizations to undertake monitoring of environmental compliance such that violations could be reported to the concerned enforcement authorities. But it says explicitly nothing about public hearings, which are local events and continues to talk about decentralisation in decision-making. In reality, however, in several projects including the Allain Duhangan hydroelectric project in Himachal Pradesh and the Bodh Ghat project in Chhattisgarh, community voices have been subverted. Environment Impact Assessments (EIA) have hit the hilt whereas `public hearings have been reduced to a farce.

The policy does not look at address the real situation on the ground. The Allain Duhangan hydroelectric project in Himachal Pradesh is a private party project that is seeking funds from various financial institutions including commercial banks. The public hearing that it conducted was announced at the nick of the time such that the dissenting voices could not take part. Thanks to some alert activists, the district authorities were forced to reconvene the public hearings. Privatisation is welcome only when the regulations and their implementing mechanism is in place. Otherwise private parties can manipulate the findings in close connivance with the authorities.

It is apparent that the policy has been drafted in haste a la cut and paste technique. However, in the process the government has won half the case because in any debate the one who has the power to set the framework and define the terms has an enormous advantage. Further, it leaves those taking critical positions fall into the crucial rhetorical frameworks that are often difficult to challenge in public. Havent the development v/s environment debates of the past, including Narmada, Tehri and to some extent River interlinking, fallen into this trap?

Now that the draft policy is upon us, efforts are being made by various groups to challenge it on various accounts. Some are asking for an extension of the deadline for broad participation and discussion on the policy amongst communities.

In sum, embedded in the draft are assertions and assumptions that have to be resisted. This is the reason that the draft policy is dangerous. However, in a functioning democracy, differences over policy choices should be as robust as possible. Consequently, the task before the critics is to challenge the framework such that chances for a meaningful dialogue on the draft environment policy do not evaporate.