The unfinished war on polio

As new cases of polio are reported in Andhra Pradesh and Karnataka, health departments scramble to respond quickly. Safia Sircar on a neighbourhood program in Shorpur.
01 September 2004 -

On May 9, scores of women involved in a Neighbourhood Leader Program (NLP) brought their neighbours, relatives or friends' children to booths in Shorpur. They came sometimes carrying two and stringing five to six behind them, throughout the pulse polio immunisation day.

Little six-year-old Renuka did not want to be left behind; copying her mother Yellamma's actions, she got eight children into the booth. She isn't just tagging along; she even knows some of the do's and dont's of this effort. Seeing Renuka carrying a younger child I ask, "Has this one got the drops?" Renuka suitably admonishes me, "Only children below five years should be given drops, he is more than five." Then she chirps gaily, "I like doing this work because my mother is also doing this. If you do not give polio drops to children then they become physically handicapped. Their legs and arms become twisted. If you give them drops then they will be healthy."

As with Renuka, I was amazed to meet 12-year-old Mariappa. He is a special child, more than moderately affected, but full of life. Mariappa brought 20 children to the booth! He points to scores of curious children hopping around, "They all are my friends. I went to their houses and got them. I told them to take polio drops." 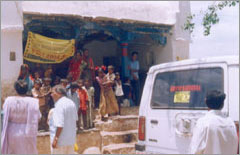 Picture: Lining up on immunisation day.

The women involved in the NLP program are volunteers. Most work as labourers, earning Rs. 20-25 a day. They are not paid a single rupee for this effort; instead they have to miss their workdays to volunteer for these activities. Ask Sreekamma, Bimbarayi, Vijaylakshmi or Yellamma why they do it, and a uniform response arrives. "Though we have forgone Rs. 25 today we do not feel bad for doing this kind of work." One noticeable factor is the complete absence of men in the pulse polio activities. Sreekama answers directly, "Men say this is the duty of women only. This talk of sharing work between men and women does not work. I love doing this work, so I do it." Sincerity shines in her eyes.

Shorpur is a pointer to all those wondering how to reach zero incidence of polio in the country. If similar meticulous planning and strategy is applied elsewhere in India the target can be met. Suresh Babu, Secretary of Action for Rural Reconstruction Movement (ARRM), Prabhakar, the tehsildar of Shorpur taluk, Dr. Patil from the Karnataka health department and Sukanya from UNICEF pore over a colourful map of Tintini village prepared by Gangadhar from ARRM.

Gangadhar explains the markings on the map; the wriggly lines identify roads, rivers, forests and border outposts in the village, temples, accessible polio booths, houses whose children who have taken the drops and those who haven't. The map clearly marks out the territories under the charge of each of neighbourhood leader.

For a country to be declared polio free, no case should be reported for three consecutive years. India now aims to achieve zero incidence in 2005."

Suresh Babu of the NLP says, "In Tintini village we have formed 20 village committee leaders. Each of these leaders has five people under her and they all take charge of a particular area. For example we have named this area," he says pointing at one place on the map, "Parvati. The person in charge of Parvati area will have five people under her and the six of them will be responsible to bring all the children in their area to the polio booth on the booth day. For every 20 families we have five people owning their responsibility and preparing this micro-plan." Energetic people like Gangadhar, Vijaylakshmi, Sreekamma, Bimbarayi and others were selected and trained through UNICEF and are now imparting their knowledge to others through the NLP program.

The NLP team prepared detailed micro-plans for 36 panchayats in Shorpur that have a total population of 32,000; for six other panchayats they chartered micro-plans for the slum areas alone. The NLP is increasing its coverage step by step. Dr. Patil adds with a proud smile, "The idea was to mobilize more children on the polio day. Earlier there were just mop-up rounds. Now we have one booth day and three days of house-to-house visits. After seeing the poor performance in January and February, we started this plan in April. With this plan we were able to reach the families individually through our staff network. In February the coverage was just 33 percent while in April it increased to 75.4 percent but this time around we are expecting around 85 percent."

Vikas Verma, Communication Officer for UNICEF at Hyderabad informs me, "India is among the six countries - the others are Pakistan, Nigeria, Niger, Egypt and Afghanistan - where polio has been reported in 2004. Bangladesh has been free of polio since 2000. For a country to be declared polio free, no case should be reported for three consecutive years. India now aims to achieve zero incidence in 2005."

But as informed by J. Lakshminarayana, Joint Commissioner for Family Welfare who is also a special officer in charge of immunization, after a case was discovered in December 1999 there was no incidence for three-and-a-half years in Andhra Pradesh. But cases were reported last year, and then genetic tests confirmed that these polio virus strains originated from Meerut in Uttar Pradesh, where the number of polio survivors is high. In 2003 a wild polio virus strain was found in Karnataka and Andhra Pradesh; these were traced to migrating populations from Uttar Pradesh.

Adds Lakshminarayana, "Immediately after we discovered the cases, mop-up operations were launched in the districts bordering Karnataka. Despite this, the first case in Karnataka was discovered during the May-October period." The resurgence was first observed in Belgaum district in Karnataka in May 2003 and soon also in several neighboring districts in both states. So far, a total of 37 cases have been reported from Karnataka and 21 from Andhra Pradesh.

Doo boond zindagi kay (two drops for life) exclaims Amitabh Bachan's bright yellow poster in Andhra Pradesh's isolated Chinnakadubur and Napelekal villages. But Big B is not much of an icon; here it is Chiranjeevi, the Telugu film doyen who has recorded public service messages on 40-second tapes. The enthusiastic local UNICEF team played the tapes at 6 A.M. Says Bheemavayam of Napelekal village, "early in the morning they blared the tapes! I can't understand why use Chiranjeevi? We have a mind of our own to reason." Behind Bheemavayam's grumbling is a deep hurt. His five-year-old nephew Anjanelyu was diagnosed with paralytic polio in early January 2004. 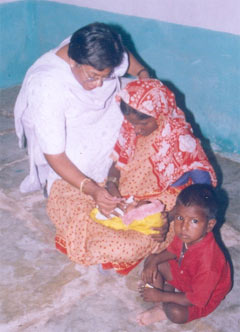 In January Anjanelyu suffered high fever and was taken to Kurnool hospital. On the third day, his legs became twisted and he was unable to stand. His father Hanumanth who works as a laborer says, "Since we got to know he has polio we have been roaming to all doctors. Our child got all the polio drops and vaccinations. In our household we have 18 children and we took care of all. We were never neglectful in this matter. The schoolteacher informs us in advance when the designated polio-drops day is, and we take our children to the school. There was no laxity on part of the government officials either. If any children missed the polio drops then officials come on recheck rounds and give the drops."

Then how did Anjanelyu got affected? Two vaccines are currently used in the global campaigns to eliminate polio viruses - the Oral Polio Vaccine (OPV) used in India and in other developing nations, and Inactivated Polio Vaccine (IPV) used in developed countries. IPV is a killed form of the polio vaccine and is injected subcutaneously while OPV is a live polio vaccine administered orally. In India the OPV is preferred over IPV as it costs less than IPV, does not require trained health workers and offers secondary vaccination but it has one serious disadvantage; the risk of vaccine-associated paralytic polio. In any attenuated vaccine, there exists a danger that the attenuated form will revert to the virulent form. About one in 2.5 million doses of OPV results in vaccine-associated paralytic polio. Unfortunately, Anjanelyu happened to be one of them.

The hardy polio virus lies latent in the human intestines of children, is ejected into the environment through excreta, and transmits to other children by contact with fecal matter. Children living in crowded and unsanitary conditions without access to clean drinking water are particularly vulnerable. Even children who are themselves unaffected can in turn transmit the virus to other vulnerable children, especially as sanitation and hygiene in the villages is pathetic. Washing, cleaning, bathing and defecation occur in the same area. In these circumstances, merely providing polio drops is not enough; transferring knowledge on sanitation is crucial too. Andhra Pradesh and Karnataka have now become hot zones for a virus that was thought to have been eliminated earlier.

This national immunization drive to reach every single child under the age of five with two vital polio drops is a significant effort. Along with the Central and State government departments, United Nations Children's Fund (UNICEF), World Health Organization (WHO) and Rotary International are chipping in to serve a population numbering close to 165 million in this age group. Communicating their message far and wide is an important tool in the effort. Passing through Gulbarga, I noticed a sign that read, "Now more than ever, stop polio forever."

Safia Sircar is a freelance writer and researcher based in Hyderabad.

BACK TO SCHOOL : Meaningful restart of education is critical
MORE ARTICLES
on similar topics ...
DISABILITY