The fault lines laid bare by covid have made the public more attentive towards the state of health care. Rajasthan has introduced legislation to recognise the people's right to health care. Tamil Nadu also declared it would make health care access universal. Sweta Dash reports.

In January this year, when the country was still grappling with a surge in Covid cases due to the Omicron variant, the Rajasthan government introduced a much-applauded draft of the Right to Health Care Bill, 2022. As a first in the country, the draft promised a definition of rights of the patients and their attendants, as well as that of the healthcare providers. For transparency and accountability purposes, the draft promised access to information on treatment costs, health records, and right to consult other healthcare providers, and incorporated a grievance redressal mechanism.

Many in Rajasthan had hoped for such a Bill as the Chief Minister, Ashok Gehlot, had indicated this in the 2021 state Budget. The state had already shown some initiative in this direction by doing away with OPD/IPD charges in medical facilities, and providing free medicines and diagnostics. In March, Tamil Nadu also announced it would make access to health care universal. The state health minister said that the aim of the proposed legislation is to enable access to health care for all. He promised that the Bill will be tabled in the next state assembly session.

Both these state Bills are attempts to move closer to the idea of Universal Health Coverage (UHC).

According to the World Health Organization, "UHC means that all individuals and communities receive the health services they need without suffering financial hardship. It includes the full spectrum of essential, quality health services, from health promotion to prevention, treatment, rehabilitation, and palliative care across the life course." The idea of UHC finds a place even in the 1948 Constitution of the World Health Organisation, which declared health a fundamental human right of all people. UHC emphasizes "not only what services are covered, but also how they are funded, managed, and delivered." 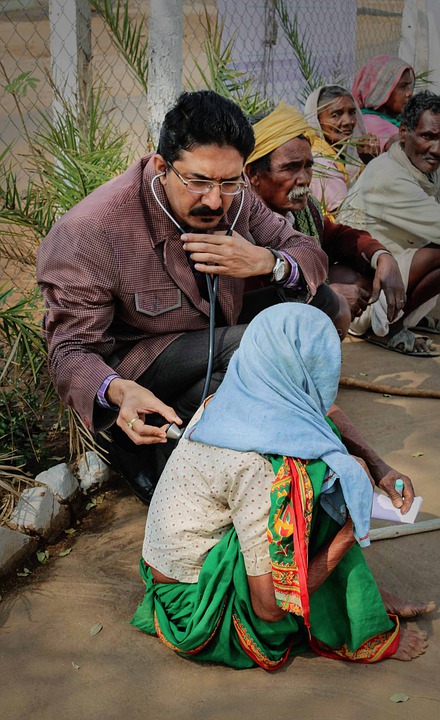 The devastating fault lines in the health care system were laid bare by the coronavirus pandemic. Picture courtesy: Pixabay.

While UHC is new in India, it has been implemented in many forms in over 70 countries including several developing nations. Sri Lanka, Thailand, and Brazil are countries of different sizes which have all instituted universal coverage. India too considered it at the time of independence, but the idea didn't get enough traction then.

The 1946 Bhore Committee report shed light on the imagination and implementation of UHC in a newly independent India. Guided by the objective of providing integrated promotive, preventive, curative and rehabilitative services to the entire population, the committee recommended the integration of preventive and curative services at all administrative levels, and development of Primary Health Centers (PHCs). This was long before the historic Alma Ata Declaration in 1978 that issued the clarion call of Health for All. That declaration, signed by 134 countries, acknowledged health as a fundamental human right.

Understanding the possibilities and promises

In India, Right to Health is not recognised as a fundamental right in the Constitution. Nonetheless, this right has been read into Article 21 - the fundamental Right to life and personal liberty - through judicial interpretations. Also, the Directive Principles in the Constitution - which are not justice-able, but nonetheless indicative of the intent of the framers -  place a responsibility upon the states to  protect people’s health.

A crucial step to safeguard people's rights to health and healthcare was promised by India’s first Patients' Rights Charter released by the Ministry of Health and Family Welfare in August 2018. A year later, the MoHFW was still requesting state governments to actually adopt the  charter "so that the basic and common grievances of patients and clinical establishments are addressed". This never quite saw light of the day in real terms.

Over the last two years, the pandemic has laid bare the devastating fault-lines in our health care system. Patients were left in the lurch without tangible rights and legal safeguards. There were reports of denial and neglect of health care, overcharging, hostage situations, and more all around. A 2021 report "Securing Rights of Patients in India: Lessons from rapid surveys on peoples" by Oxfam India noted people's experiences of the Patients' Rights Charter and the Covid-19 vaccination drive. A cost estimate of the treatment was denied to 58 per cent of respondents before the start of treatment. Case papers and documents were denied to 31 per cent of the respondents.

In July 2021, a plea filed by Jan Swasthya Abhiyan, Patients’ Rights Campaign, and Mumbai-based health laws researcher Gopakumar K M in the Supreme Court sought urgent implementation of the Patients’ Rights Charter. The Court took cognisance of the violations of patients’ rights and issued notice to the Central Government on the status of this implementation. But, there has been no significant improvement since then.

Amidst all this, now, the public and the mainstream discourse is more attentive towards the state of health care in the country. The need to demand the right to care and move towards UHC has perhaps never been so urgent. The state attempts to introduce the Right to Health Care could indeed be a glimmer of hope finally after these abysmal times. Such laws, if they are approved after due public consultations, will help people's access to equitable healthcare. It will inculcate a sense of trust for the public and give them the much needed entitlement to demand better systems for affordability, transparency and accountability. It will enable access to information of not just the healthcare services in itself but the procedures for pricing, alternatives for their current healthcare institutes and providers, and for grievance redressal.

Sweta Dash is an independent journalist and researcher interested in public health, identification documents, and welfare rights. This article is made possible through reader support for India Together's development journalism fellowships.

CHANGEMAKERS : A fuller picture of ourselves
MORE ARTICLES
on similar topics ...
HEALTH