The millions who cannot vote

By having elections at a time when people are forced to migrate in search of work, we are simply excluding an ever-growing number of citizens from the vote, says P Sainath.
01 April 2004 -

Millions of Indians who really want to vote in this election will not. The rural poor, far more than the chattering classes, are the pillars of our electoral system. The vote is the one instrument of democracy they get to exercise. And they do that with telling effect, often using it to go out and change governments. This time, many of them cannot vote. The timing of the polls ensures that. It is in April-May that quite a few distressed regions see their largest exodus of migrant labour.

Millions will be out of their constituencies, seeking work to survive. These are not people who can send in postal ballots. Most cannot afford to return for the polls. If you are a worker from Orissa at a construction site in Mumbai, it is hard for you to vote in this season. (Someone else might vote for you while you are away  though not for the party of your choice). This is one result of early Lok Sabha polls.

Sure, migrations are not new. That's all the more reason we should take them into account. They have been around long enough for us to know better. It's important, though, to note that distress migrations have risen since the early 1990s. And exploded since the late 1990s, with the collapse of rural employment. Long before the migrations swelled to an exodus, the National Commission on Rural Labour found (1991) there were "more than 10 million circular migrants in the rural areas alone. These include an estimated 4.5 million inter-state migrants and six million intra-state migrants." And the NCRL report is outdated. It was in the 1990s that the numbers began to grow as never before. 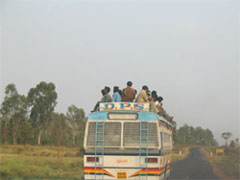 Both the Census and the National Sample Survey Organisation grossly underestimate short-term migration. (Ironically, in 2001, such migration was so high in western Orissa, it distorted even the main Census head count in some parts.) NSS data have drawn on a strange definition of `last usual place of residence' of a migrant. That is: "the village where the person has stayed continuously for at least six months immediately prior to moving to the present village/town," where the person is counted. (NSS 43rd round.)

This excludes millions locked into endless step-by-step migrations. People who may not be anywhere for six months. Footloose migrants who are almost always on the move, from place to place, just to survive. But the Census and the NSSO see migration as a single-shot event. Not as a process. So the many moves the migrants make are never captured.

Take the months of April-May last year. Close to two million Oriyas were out of their state looking for work. An underestimate, but it still gives you an idea. Very few, though, were off for six months at a stretch. Barely any were home for six months at a stretch. Lakhs of people from just the three districts of Nuapada, Kalahandi and Bolangir were out. Just for the season. Pulling rickshaws in Raipur. Slaving at brick kilns in Vizianagaram. Working at great risk on high-rise buildings in Mumbai. The same migrants could be elsewhere at another stage of the same season. The way we define them gives us no clear idea of their numbers. Nor of how many of them are denied the vote as a result. We do know the figures are in millions. And rising.

The devastation of agriculture in the last decade makes the problem more acute. Zero investment, collapse of employment, a rise in debt  all are factors that have pushed millions more into the footloose army. At the same time, the towns and cities can absorb far fewer of them. There is much less work there, too. So the pressure on the migrants to keep moving only gets worse. Which means they go in for more and more short-term, footloose journeys in search of work.

Meanwhile, this year, we already have The Hindu (Feb. 28) reporting thousands of adivasis in Bolangir leaving their homes "for survival." That's in February. What could it be like by April-May? Can these people vote?

In that season last year, I boarded a bus for Mumbai from Mahbubnagar in Telangana. The idea was to join the migrants leaving the district in despair and hunger. Whole villages had seen more than two-thirds of their residents leave, looking for work. Only the very old and some young remained. Every traveller on that bus was a migrant wanting work  or a child of such migrants. Every bus on the route (with 58 seats), carried up to 100 passengers or more. The season brought record revenues for the Andhra Pradesh State Roadways and Transport Corporation there  on one-way tickets (most went back in under six months, though. Only to move out again in their quest for survival.)

Millions of poor Indians have already voted  with their feet. They've left their homes in despair. Forced by a system that causes them such distress. One that tries, at every turn, to disable them and curb their democratic rights.

•  The bus to Mumbai

Buses plying that route went up from one a week 11 years ago  to close to 40 a week last year. At the same time, all three trains from the region ferried out tens of thousands more. The biggest group leaving were Lambada adivasis deep in debt. Followed by poor Dalits. This was just the Mumbai route. People from here go to 30 other destinations ranging from Gujarat to Rajasthan. In one estimate, over eight lakh people from Mahbubnagar were outside the district by April. Could they vote in such a season?

This year, one estimate looks at just Kurnool district. "Over three lakh agricultural labourers have migrated to Guntur, Cuddapah, Hyderabad and other places of the state in search of work during the lean season." (Frontline Feb. 28-March 12.) Again, that is a February figure. What will it be by April? What's more  it is migration within the state. That too prevents many from voting. People from, say, Ramanathapuram, move to other parts of Tamilnadu during April-May. Many leave the state as well. Either way, they mostly cannot vote.

In late April, there will be Biharis still in Punjab or Assam. Oriyas in Andhra Pradesh, Gujarat and Chhattisgarh. People from Tamilnadu on the road crews of Mumbai. Workers from Rajasthan struggling in Gujarat. Those from north Karnataka scouring Maharashtra. Adivasis from Madhya Pradesh in the brick kilns of Haryana. That's an incomplete list. In April-May, there will be countless millions of them. Forced to scrape out a living away from home.

Yet those at the bottom do want to vote. Malari village in Ghazipur, Uttar Pradesh, rubbed that in during the 1998 polls. All communities had their voting booths within a few minutes of their homes. Except the Dalits of Malari. For them, the officials had set up a booth four km away. All vehicular traffic was banned on election day. Even cycles. No transport  and a booth so far away? This was meant to discourage them. But it didn't work.

Of Malari's 219 Dalit voters listed at this booth, nearly all turned out. The young assisted the old. A few in their Seventies made that four-km trek across the fields to vote. On arrival, some found they had "already voted." The upper castes had saved them the trouble. Yet the rest voted and the basti rejoiced  a triumph of the human spirit and democracy. That was in mid-February.

But how many can make that trip in late-April 2004? Will the young be around to assist the old? How many would have left the district, searching for work during the lean months? How many of their votes will be cast by others? In some places, there has been `heavy voting' when no one is around.

Migrant workers tend to be concentrated in some clusters of villages within certain districts. So their absence in large numbers can strongly affect some seats. In a closely-fought election, they could make a crucial difference. Besides, they want to vote. Many have strong political opinions and clear ideas on whom they would vote for. But too often, they will tell you with regret, they were away and could not cast that ballot.

How can this be resolved?

We do take school exam schedules into account while planning election dates. And rightly so. (Even though those schedules are still based more on a British school calendar than on the Indian agriculture season.) Shouldn't we, likewise, take the survival schedules of millions of poor Indians into account? The time every rural Indian is most likely to be in his or her village is during the harvest season. That is their best chance of being present to vote. So, maybe, we need to weave election schedules with regional harvest schedules. Claims that people "are too busy" in this period help the landlords, not the workers. We are simply excluding an ever-growing number of citizens from the vote.

Millions of poor Indians have already voted  with their feet. They've left their homes in despair. Forced by a system that causes them such distress. One that tries, at every turn, to disable them and curb their democratic rights. In the process, they lose the vote. The one tool they treasure in fighting that system. By denying them that, we undermine them, ourselves, and democracy too.