The governments counter-affidavit in a recent suit could strip the ECI of its power to disqualify candidates for fraudulent accounts or put an end to the pandemic of paid news. P Sainath reports on civil society attempts to stop the subversion of the ECs powers.

In a major twist to the Ashok Chavan vs. Madhav Kinhalkar legal battle (more notorious as the “Paid News” scandal), leading civil society organisations and eminent individuals have approached the Supreme Court to implead themselves into the case.

Their intervention application, moved by advocate Prashant Bhushan, minces no words on their reasons for doing so. They are disturbed by “the stranglehold of money power on our electoral politics.” And by a recent move of the Union Law Ministry which could destroy the Election Commission of India’s power to disqualify candidates filing incorrect or false accounts.

The applicants for intervention hope to defeat “the nefarious design” of the Union government which seeks to “undo all the good work done by the Election Commission of India.” And which further seeks, to “unsettle the law already settled” by the Supreme Court of India. They wish to ensure that the ECI “retains the plenitude of its power and authority to safeguard the purity and integrity of the electoral process.” Which includes holding candidates to account on poll expenses. 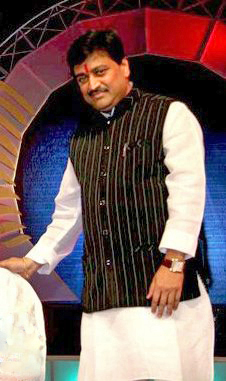 This action follows the Union Law Ministry filing a counter-affidavit on behalf of the Government in the Ashok Chavan case. That affidavit, first reported by The Hindu on March 20, asserts that “the power of the Election Commission to disqualify a person arises only in the event of failure to lodge an account of expenses and not for any other reason, including the correctness or otherwise of such accounts.” Simply put: the government claims the ECI has no right to disqualify a candidate even if his accounts are found to be improper or fraudulent. If accepted, this would virtually gut the powers of that Constitutional body. (However, the Court is yet to give any ruling on the matter.)

Those seeking to intervene include Common Cause, a public interest body. Its legal activism on electoral matters had a role in the Supreme Court’s ordering that political parties had to file regular returns of income or invite possible penal action. Also in the line-up is the Association for Democratic Reforms (ADR), a group at the forefront of many battles for electoral and political reforms. Vital among those, a public interest litigation (PIL) of ADR in 1999, which later saw the Supreme Court order candidates to disclose their criminal, financial and educational background prior to the polls. That is, by filing an affidavit with the ECI. Common Cause and ADR are joined by five other civil society bodies in this application.

The immediate beneficiary of the UPA government’s attack on the ECI’s powers is the disgraced ex-chief Minister of Maharashtra, Ashok Chavan. As former Chief Election Commissioner N. Gopalaswami has pointed out: “The government has joined Mr. Chavan in challenging the Election Commission’s power to disqualify a candidate under Section 10A of the Act for his failure to submit a correct and true rendering of his election expenditure” (The Hindu, April 17, 2013). The former CEC clearly sums up the impulse for civil society action: “The case before the Supreme Court is no longer one of Dr. Kinhalkar and others vs Ashok Chavan. It concerns every individual and institution that is uneasy about and opposed to the sway of money power in elections.”  (See “Doublespeak on electoral reforms, April 17, 2013, The Hindu).

Mr. Chavan not only lost his post in the fallout of the Adarsh scam, but also earned notoriety in the “Paid News scandal,” a story broken by The Hindu (See: “Is the ‘Era of Ashok’ a new era for ‘news’” November 29, 2009).

The applicants for intervention in the case note there is “a growing concern that the pandemic of Paid News is eating into the vitals of our democratic polity by compromising the purity of the elections and destroying the credibility of the print/electronic media.” They cite the case of Umlesh Yadav, MLA from Uttar Pradesh, who was disqualified by the ECI for three years. Ms Yadav had failed “to account for an expenditure of Rs. 21,250 on an advertisement that had appeared in the disguise of a news item in the Dainik Jagran,” of April 17, 2007.

They note that “Umlesh Yadav pales into insignificance in comparison to the media blitzkrieg” launched in support of Ashok Chavan’s 2009 Assembly election campaign. And that the Government of India which had ostensibly taken a strong public position on Paid News and praised the ECI’s efforts to curb it, “has filed a counter affidavit which reveals its true colours.”

The Election Commission is also likely to file an affidavit opposing the government’s pro-Chavan counter-affidavit.