Two areca farmers of Sirsi in northern Karnataka, Ganapathy Dattatreya Hegde and his brother-in-law Ananda Subbray Pratakahal have become community leaders, workhorses and heroes, all in one. They have turned a situation of water-scarcity and soil-degradation into one of regeneration. Keya Acharya reports.
03 July 2007 -

The two of them sit with books and records to explain their quiet but commendable effort, men in their early forties, one cross-legged on the wooden floor, the other on the sofa in the large, old homestead home at Onnikere, 20 km from Sirsi which itself is about 400 km from Bangalore. Onnikere is also called 'banavasi Onnikere', or 'forest dweller', giving one who hasn't seen the area some idea of the forests in the region.

Sirsi district houses part of the Western Ghat ranges and is about 80 per cent forested. Predominantly agricultural with areca as the main crop, besides pepper, cardamom, paddy and others, the areca plantations here have been given forest lands called soppinabetta, for use as foliage for the areca through a special privilege act from colonial times that prevails even today. The British weren't interested in the areca, but in the pepper that was cultivated with the areca, its vines using the areca-trunks as support. The leaf-litter from these soppinabetta forests was used as mulching for the areca which needs both moisture and valley-slopes to do well.

The three natural lakes within betta lands at Onnikere have filled up enough to sport darters and a host of water-birds and geese coming in to roost in the evening light.

Thus, with every acre of areca came nine acres of forest lands. The areca land-owner was, and still is, allowed to build his home on 'betta' lands, but cannot sell or use these forests for any other purpose. Today, most soppinabettas have been divided within the family between the sons (it's a patriarchal society) but have generally remained unencroached.

But soppinabettas are now facing acute degradation due to overgrazing by the farmers' cattle and from lopping of trees and branches so severely that it doesn't grow back. The result has not only been less leaf litter for the areca, but soils have degraded and the resulting water-scarcity in non-monsoonal times is causing hardship to both farmer and cattle. The high-intensity of rains is also causing problems with washing off the topsoils of the betta lands that have no forest cover on them. The degradation in some places still show signs of desertification. Wells also turn dry in the summer months.

It is in turning this water-scarcity and soil-degradation situation into one of regeneration that the two areca farmers of Onnikere, Ganapathy Dattatreya Hegde and his brother-in-law Ananda Subbray Pratakahal have become community leaders, workhorses and heroes, all in one.

Their story of water-conservation is one of trial and error, started in 2001. Like other farmers in the community, the two sell part of the milk from their jersey hybrid cows to the state dairy co-operative, Karnataka Milk Federation, whose truck comes early morning daily to collect the milk. The collection spot is a meeting point and important communication centre for the community of three villages with 150 families and approximately 1500 people. The total betta lands amount to approximately 600 acres. 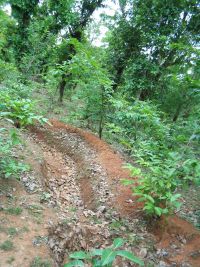 It was at one of these 'milk-meetings' that some farmers were discussing the unpredicatability and delay of rains in recent years and wondering what to do. One farmer, Raghav Hegde, told them he had read of various soil-conservation methods for retaining water, but the methods didn't quite match their situation.

"We started by working a series of small 'half-moon' trenches around selected trees on the upper slopes of betta lands, to stop leaching and soil arrest," say Ananda and Ganapathy. The duo convinced the others in the three villages that this was a community matter that would benefit all of them and so all work would be a collective effort, regardless of whose betta lands they were working on. The work would involve two mornings on a Sunday and Monday. Three people came forward and work started on the 10 June 2001.

But they soon found that the 'half-moons' filled up with mud from the slopes above in just a month or in days, depending on the intensity. The duo then went and studied rainwater collection and flows on some of the betta lands to see how best to proceed and decided to dig tenches 6 ft long, 3 ft wide and 2.5 ft deep on top of betta lands. They made small channels on the sides to stop water flowing off with soils, leading some into the holes of disused termite mounds to allow for deeper percolation. On level lands, they dug bigger trenches.

"So we spent the first year on acquiring know-how," says Ananda, "and we planned the next year in plots." By 2006, the community had covered 400 acres in plots with about 1500 trenches approximately 20 ft apart on higher slopes.

Actually they did even better than plotting the trenches. From 2003, the duo started calculating how much water filled in the trenches, how many times it filled and how much water was needed for domestic consumption for two villages. Ganapathy, already a meticulous and thorough recorder of rainfall each year from 1984, was well-versed in the job. They got hold of the voters' list for the area and went from house to house, recording the amount of water spent per day and extrapolated accordingly. The annual consumption for two villages is 1,45,00,000 litres. 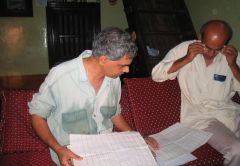 "So now we know that we have at least 1,40,00,000 litres of 'extra' water filling into our water table," grins Ananda. By 2007, the roster of work was well cut out: all they needed was an average 10 people working a total of 16 full-workdays in the rainy season. "All those who were skeptical or did not give permission for trenching their lands have now gone silent, because they too can visibly see the benefits," says Ganapathy.

"The monsoon was predicted to come on 24th May this year, but it's the 12th of June today and still there's no rain," says Ganapathy. "But we're all managing well because we have water in the wells."

Ananda thinks the rainfall increase in the last two years could well be because of the regeneration happening in the betta lands due to water-recharge, but he has no data to prove that connecting link. The annual rainfall is now 150 cms per year, but the duo feel the community can manage even if they get 100 cms in any year. The remaining 'trenchless' 200 acres of their 600-acre betta lands are also being left now to regenerate on their own, since the watertable is improving so rapidly.

And what a regeneration has happened in Onnikere! The three natural lakes within betta lands at Onnikere have filled up enough to sport darters and a host of water-birds and geese coming in to roost in the evening light. Flash floods that happened each year, even with just five cms of rain because of the lack of soil cover have already been arrested. The leaves of the trees look greener, fresher with more 'shine' to them; grasses have caught on in most places, especially on the lower slopes and the general vegetation is already much improved.

The community has banned grazing within the bettas; those whose bettas are in better condition allow controlled grazing. Cattle are stall-fed. "Sirsi is the country's largest importer of cattle-feed," says Ganapathy wryly.

The areca too has benefited greatly. "Yields are good and there is a lot more colour in the areca nut," says Ganapathy.

Maintenance of the trenches generally involves desilting annually, but Ananda studied the trenches and found that the leaf-litter and moisture left behind in the trenches after the rains have earthworms in them helping to decompose and aerate the litter enough to allow percolation to happen. So now, they don't even need to do much cleaning of the trenches.

Word of Onnikere's water-wealth has now spread and others are coming in to see what the community has been doing. One community of villages near Kalawe and Gubbigadde in the same taluk have also begun similar rainwater conservation measures.

And Ananda and Ganapathy now conduct training programmes for other villages. "We only tell them about the structural part of it, since we do not know the topography of their betta lands. They have to work out the details for themselves," explains Ganapathy, surrounded by log books and papers in the large room of his old house in Onnikere.