From plants to plastics

Plastics have become synonymous with modern life, but are difficult to dispose of and have become a significant source of environmental pollution. Biodegradable plastics are now a possibility, and a shift in India's agricultural biotechnology thrust may help put them to good use, says Vaijayanti Gupta.
12 June 2006 -

Plastic consumption in India has been on the rise for the last few decades and has especially penetrated every sphere of urban life. Presently, the plastics industry is worth Rs.25000 crores*, according to news reports. It may be true that the magnitude of plastic usage in India is still a tenth of that in the U.S., but it is critical for Indians to rethink alternatives at this juncture and avoid public health and environmental catastrophes.

Improperly disposed plastic materials are a significant source of environmental pollution, potentially harming life. The plastic sheets or bags do not allow water and air to seep into the earth, thereby reducing the fertility of the soil, depleting underground water and harming animal life. News reports have mentioned cows choking on plastic bags in New Delhi, while trying to eat vegetable waste from the garbage. The same is true in case of marine animals like whales, dolphins, turtles and seabirds.

One of the biggest challenges with plastic waste is that it is extremely hard to dispose of and persists in the environment for almost 400 years. Disposal by burning, which according to the claims of plastic manufacturers only releases carbon dioxide and water, actually throws up some of the most poisonous chemicals known to us, like polyvinyl chlorides, polyurethene, polystyrene and acrilonitriles. Also, carbon dioxide and methane produced during plastic burning are greenhouse gases. In addition, even minute amounts of the compounds used as additives in plastic have been linked to reproductive damages like falling sperm counts, increase in testicular cancer cases, and other abnormalities.

While the problem of plastics disposal has to be recognised and accepted globally, India's particular situation could be worsened by our poor drainage infrastructure in the cities, and fewer resources to spare for post disaster rectification. In fact, during the flooding of Mumbai during the 2005 monsoons, plastic bags were reported to have exacerbated the floods by choking drains and gutters.

The central problem with plastics from hydrocarbons is that they are not biodegradable because of their long polymer molecules.

"Biodegradable" means that a substance can naturally decompose with the aid of microbial organisms and will not persist in the environment beyond a certain time period.

Still, with a population of over 1 billion people, and a fast growing urban society fashioning its lifestyles after the west, large plastic consumption is perhaps unavoidable. Disposal of plastic waste in a country where municipal waste management systems are already weak becomes a problem of severe proportion.

But there may be a way out. With a growing research focus in bio-sciences and biotechnology, it is perhaps possible for India to initiate its own answer to the "plastic" problem.

Most of today's plastics and synthetic polymers are produced as by-products from petrochemicals - non renewable energy resources such as oil, coal and natural gas. The central problem with plastics from hydrocarbons is that they are not biodegradable because of their long polymer molecules. "Biodegradable" means that a substance can naturally decompose with the aid of microbial organisms and will not persist in the environment beyond a certain time period. The usual range for biodegradability lies between 60-90% decomposition within two to three months in standard composting environments. The polymer molecules of conventional plastics are too large and their underlying chemical bonds too tight to be broken apart by microbes.

Biodegradable plastics that are easily decomposed by microorganisms persist for much shorter time in nature, and they may provide viable alternatives. The chemical bonds of biodegradable compounds are easily destroyed by a variety of bacteria over a small period of time that facilitate their decomposition. For e.g., organic products or produce could be deliberately packaged in biodegradable plastics to ensure decomposition of the product and the package together, when disposed.

What is relatively less explored is that such plastics can actually be produced from a variety of plant and bacterial sources. Biochemical researchers and engineers have been seeking to develop biodegradable plastics that are made from renewable resources, such as plants. In fact, compared to petrochemicals, natural plastics can provide a much wider array of basic compounds (monomers), that may be bonded together to form the plastic compounds.

These can arise from two different methods - (1) secondary compounds that are naturally produced by plants and (2) transgenic plants that can make and store large quantities of plastics in the cell organelles called vacuole. These secondary metabolic products as well as transgenic plant plastics offer a range of plastic compounds  some of which decompose relatively quickly, and some which have longer durability, depending upon the source. 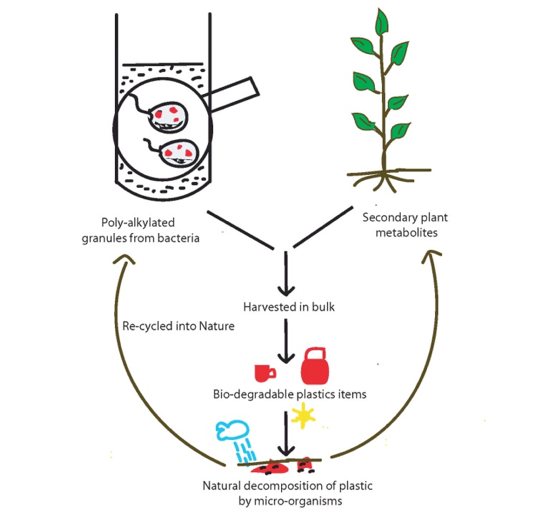 Scientists, for example in the United States, have already been able to produce plastics from corn, wheat and soyabeans in the form of cellulose, starch, collagen, casein, soy protein polyesters and triglycerides. For example, most cereal crops and tubers contain vast storage of starch, a natural bio-polymer which is readily convertible into plastic. However, basic starch is water soluble which may limit its use. But with the help of several microorganisms, it can be transformed into lactic acid, a basic compound that can polymerise to give polylactides (PLA), which can be used in a variety of products. Already, owing to its easy decomposability, this product has been successfully used for drug delivery and implants in the medical world.

Biodegradable natural plastics can also be manufactured from bacteria. Within bacterial cells, granules called polyhydroxyalkanoate (PHA) are stored. Bacteria can be easily grown in bulk culture, and the plastic harvested.

Genetic engineering can also be deployed as a novel biodegradable plastic generating tool. Corn plants containing the bacterial gene for producing PHA have been shown to produce the same variety of plastics within their cells.

How do natural plastics degrade? This can happen in three ways: (1) Burning/Incineration where unlike ordinary plastic, the film burns very fast leaving small residues. (2) Photo-degradation where the plastics are disintegrated under constant Ultra Violet radiation into smaller particles, which in turn get degraded completely by microorganisms under soil. (3) Vermicomposting, which consists of introducing earthworms in biodegradable plastic waste with moisture or water. Moist conditions accelerate multiplication of microorganisms which eat biodegradable film and make it porous. Porous waste is then eaten by worms like earthworm.

Additives for disintegration of plastics are used while manufacturing of plastic bags and sheets which pre-determines the degradation time for the plastic. When the plastic is disintegrated into flakes or pieces, the weight to volume ratio comes down and they do not form a layer on the soil that may otherwise cause pollution. They allow water and air to go into the earth, thereby saving the natural resources.

Despite these recent developments, however, there is a substantial amount of opposition from various fronts for India to switch to biodegradable plastics.

The first two difficulties -- cost and lack of policies -- must be openly discussed in public forums to raise understanding about the true costs of plastic generation.

One, in our society today, plastic collection and disposal comes completely free of cost. If plastic manufacturers were to be charged a fee for producing an environmentally hazardous material and made responsible for plastic disposal, the cost of common plastics will escalate and consumers will higher prices.

Two, both manufacturers and consumers should be made responsible for their plastic production and consumption. A mandatory cost could be levied to the price of all plastic items to pay for the disposal of the plastics. Awareness campaigns to explain to consumers that natural plastics are more cost effective in the long run will also help.

Four, increasing the production scale can considerably reduce the costs of production of biodegradable plastic. In comparison, plants and bacteria are some of the easiest growing organisms on earth and can be grown in very large volumes. Common plastics, on the other hand, are dependent on petro-chemicals, which are non-renewable energy sources.

In addition, there is flexibility in manufacturing biodegradable plastics. Depending upon the need of the product, the composition of plastics can be altered. For e.g. starch dissolves readily in water, but a small chemical modification of the basic compound structure can greatly enhance its durability upto four weeks. Many goods, such as plastic pots for garden plants etc, can use this modified plastic product. The duration of the plastic would be sufficient for the pots to break down to carbon dioxide and water, eliminating double handling and recycling of conventional plastic containers, and for the plant to firmly root into the soil.

Cheap plastics like starch can be mixed with more expensive biodegradable plastics in varying amounts to produce a blend of products such as plastic wrapping, shopping bags, bread bags, mulch films for the soil, milk sachets, drug delivery in the medicine world, etc.

Furthermore, cheap plastics like starch can be mixed with more expensive biodegradable plastics in varying amounts to produce a blend of products such as plastic wrapping, shopping bags, bread bags, mulch films for the soil, milk sachets, drug delivery in the medicine world, etc. This would also bring own the cost of production.

Biodegradable plastics can also be used in a mix with conventional plastics, thus reducing the total amount of non-degradable plastics. A biodegradable polythene material developed by National Research Development Centre (NDRC) in New Delhi is claimed to be degradable in two months. This is made from 60% ethylene, 40% starch and a binding agent.

In sum, instead of using the same variety and source of plastics for all plastic products, different classes of biodegradable plastic products may be conceived separately, depending on their usage.

It is certainly true that the bigger goal in promoting biodegradable plastics is to protect the environment from abuse. In that light, citizens need to recognise that there is a more important 'R', that may be worthwhile noting before the widely recognised 'Reduce, Reuse, Recycle slogan': 'Refuse'. While refusing the use to conventional plastic may sound harsh, it is one option consumers have.

However, given that plastics have seeped into every sphere of human existence, including medicine, research and many other sectors where it is indispensable, it is critical that alternatives to conventional plastics are developed. The agricultural biotechnology thrust in India thus far has primarily focussed on GM crops and seeds, or extracting medicinal values from plants. But research on using plants to produce biodegradable plastics has received far less support. It is critical for India to re-evaluate its plastic policy now and develop a more far-sighted one.

Vaijayanti Gupta is a biotechnologist. She also takes an active interest in Women's Issues.