The National Green Tribunal's judgement in the POSCO case has implications for many other industrial development projects in the country. Shripad Dharmadhikary reports.
30 April 2012 -

The verdict has come as an important development in the long and chequered journey of POSCO's steel plant in Orissa. In many ways it is also another vindication of the issues being raised by the intense struggle against the project by the people of the area, supported by many other concerned citizens and organisations. Most importantly, this judgement of the NGT has laid down several important principles, that were long overdue. As a result, it has tremendous import for the way environment management laws and rules are applied to all large industrial projects in India, not just POSCO.

Single EIA for a project with multiple components

Several projects have multiple components. Projects linked to mining are good examples. These include steel plants (with associated mines), thermal power plants (with associated coal mines) and several others. Invariably, while these components are linked together financially, in ownership and control and in operation, they seek environmental approvals separately. This can have the effect of playing down their environmental impact, since each piece is judged separately, and there is no overall judgment of the impact from the project as a whole. 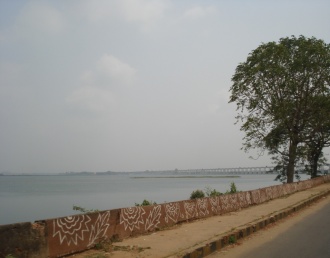 The NGT order also asks the MoEF to constitute a new committee with subject matter specialists to carry out a fresh review of the POSCO project's environmental impacts. (Photo: The Jobra barrage on the Mahanadi, from which water was to be sourced for the project).

•  Mining vs. communities
•  Anguish in Angul
•  Holding on against POSCO

A small example will show how this underplays the environmental impacts. The project has huge water requirements, and water will be sourced from the Jobra barrage on the river Mahanadi near Cuttack, a distance of 85 kms from the project's steel plant. Thus, the EIA for the steel plants states "The water source will be Mahanadi River near Cuttack about 85 km away from the plant site. Thus, there would be no impact on the surface water resource within the study area. The availability of water at Jobra barrage of Mahanadi River near Cuttack has been examined and separate study has been made by the project proponent prior to planning of the project.{Emphasis in the original]"

However, this withdrawal of water will definitely have an impact at the point where it is being withdrawn. But since that location is 85 km away, it is not considered anywhere in the EIA, which confines itself to the "study area".

Taking cognisance of this serious lacunae, the NGT has directed that "It is desirable that the MoEF shall establish clear guidelines/directives for project developers that they need to apply for a single EC alone if it involves components that are essential part to the main industry such as the present case where main industry is the Steel plant, but it involves major components of port, captive power plant, residential complex, water supply, etc."

Many large projects are clustered together. For example, a number of thermal power plants come up near coal mines. The environmental clearance process today consists of impact assessments for each of the projects, as though the rest of them don't exist! The combined effect of several projects in a region is not assessed. But the people and ecology of the region have to bear the brunt of the combined effects of all the projects. The NGT judgement discusses these issues under the heading of "EIA report should include combined impact of other project components and other existing projects in the vicinity".

Under this section, the judgement notes that the POSCO project involves several components "apart from its being located in ecologically sensitive area where already development is undergoing." The judgement also highlights the (MoEF's earlier) Review Committee's suggestion that "considering the large number of port projects coming up in the area, it would be appropriate to conduct Strategic Environmental Assessment with regards to location of projects ..."

A Strategic Environmental Assessment (SEA) is done at the sectoral level, rather than a project level to determine sectoral plans and programs. The United National Environmental Program refers to SEA as "... a formal, systematic process to analyse and address the environmental effects of policies, plans and programmes and other strategic initiatives. This process applies primarily to development-related initiatives that are known or likely to have significant environmental effects, notably those initiated individually in sectors, such as transport and energy, or collectively through spatial or land use change. SEA extends the aims and principles of EIA to the higher levels of decision-making when major alternatives are still open and there is far greater scope than at the project level to integrate environmental considerations into development goals and objectives."

In a way, this is akin to a cumulative impact assessment, but at the sectoral planning level. The NGT Order directs that "It is desirable that MoEF shall undertake a study on Strategic Environmental Assessment for establishment of number of ports all along the coastline of Orissa."

Thus, the judgement lays down the need for a sector-wide environmental assessment. This will have many implications, as a large number of infrastructural projects - like ports in this case - are being built together. Examples include massive numbers of thermal power plants in Angul, Jharsuguda districts of Orissa, Vidarbha of Maharashtra, number of dams in cascades in a single river basin on the rivers of Himalayan states like Arunchal Pradesh etc. This judgement implies that these areas / sectors also should first be subjected to such strategic environmental impact assessment.

Another very important issue dealt with by the NGT judgement is the supply of water to industry. It has said that "We are all aware that in the country, the drinking water is becoming scarce commodity and at every level precaution needs to be taken for protecting the drinking water supply to human habitation and preventing from utilizing such water for industrial use. It is always better to insist upon the project proponent /industry to create its own source of water supply."

It also directs that "The MoEF shall consider feasibility of insisting upon every major industry that requires large quantity of water to have creation of its own water resource facility rather than using/diverting the water that is being meant for drinking/irrigation purposes."

This assumes great importance in view of the large number of industry-agriculture and industry-domestic use conflicts emerging around water. In the case of POSCO, as mentioned earlier, the diversion of water at Jobra for the steel plant has become a major issue. But it should be noted that the diversion for POSCO was not the only one from Mahanadi. Indeed, huge diversions are being planned from the Mahanadi, not only in Orissa but even in Chattisgarh for industrial use, in particular for thermal power plants of many thousand MWs. Such diversions impact the poorest the most, as they take away water which not only meets domestic use needs but also the needs of basic livelihoods like fishing, small farms etc.

Hence, the need to protect these sources of drinking water, irrigation, and livelihoods is well taken. However, the way suggested by the judgement to do this - namely, that the industry create/construct a small barrage or augment any other existing source at its cost - requires some caution. Asking the industry to create its own facility has the risk that the industry will simply take over some community or public source, put its own dam or barrage and end up privatising a commons resource.

Hence, there is need for a two step approach. First it must be determined what level of industrial activity (e.g. how many thermal power plants) and what kind of industry (e.g. water intensive or not water intensive) should be allowed, based on a Strategic Environmental Impact assessment or carrying capacity studies or a river Basin study. After this, industry must be asked to meet strict norms of recycling and reuse, create water harvesting facilities, zero discharge and other measures to ensure a minimum burden on community resources.

Lastly, any arrangement that the industry still needs to create to meet its water requirement must not only protect the needs of the local communities but should also be subjected to monitoring by the community itself to ensure this.

The NGT judgement in the POSCO case has laid down several crucially important principles that can improve the environmental protection regime in the country. The MoEF needs to pay heed to these principles and accept them, rather than finding ways to wriggle out. Moreover, as these principles have been only outlined in the judgement, they need to be developed further to reach the form of guidelines and rules. MoEF should set out to develop these principles in detail with the help of independent and credible experts and communities affected by such projects.