A surge for consumer rights

In a landmark ruling, the Karnataka Electricity Regulatory Commission, constituted by Mr. Phillipose Mathai, Mr. H. S. Subramanya and Mr. S. D. Ukkali, ordered Bangalore Electricity Supply Company (BESCOM) to compensate the Bangalore-based Non-Government Organization Environment Support Group "damages to the tune of Rs. 32,935/- within 90 days from the date of the order". The Commission made this ruling suo moto on the basis of a letter petition from ESG demanding compensation for extensive damage to its computer network caused by a high voltage spike on 2nd June 2003.

ESG, unwilling like other consumers to 'grin and bear' the power providers random and repeated errors, demanded this compensation on grounds that BESCOM had failed in its fundamental obligation as electricity supplier to provide power that was free from danger and within the regulated voltage stream. In particular, ESG claimed BESCOM had not taken due precautions to keep power lines free of interference and danger, and as a result neglected the pruning of a coconut frond which fell, causing the surge. This surge caused extensive damage to ESG's electrical and computer installations, causing a total damage to the tune of Rs. 32, 935/-. 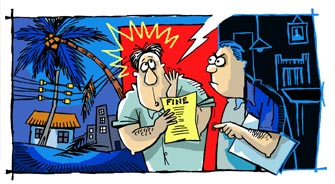 BESCOM, in its response before the commission, sought to divert the question of responsibility, and instead preferred to focus on other issues. For instance, the company argued that ESG was only a tenant of the premises where the equipment was located. The commission, however, noted that "the petitioner's installation is being supplied with electricity and that makes him a consumer under the law". The only real issue, the commissioners decided, was whether ESG was entitled to protection as a consumer, and that ownership of the premises was irrelevant.

Other contentions from BESCOM - that ESG was conducted unauthorised commerical activities in a residential property, and that ESG failed to install protective equipment - were also dismissed as unproven. The commission declined to accept the company's accusations, saying there was no reason to be distrustful of ESG.

BESCOM had one other argument to make - that the falling of the tree was an "Act of God" and thus did not constitute negligence/lapse on its part. This, the commission decided, was unacceptable. "Falling of mature fronds from the coconut tree is an expected natural occurrence and an anticipated event of routine nature. It cannot be considered as an act of God. The licensee cannot simply point the accusing finger towards the Almighty and escape from the responsibility", the commission observed.

BESCOM had failed in its fundamental obligation as electricity supplier to provide power that was free from danger and within the regulated voltage stream.

Further, the commission added, "This is one of the many cases of frequent occurrence, which could have been avoided, if the licensee were to care for the responsibilities cast on him by the law. Many such cases do not see the light of the day because of 'grin and bear it' attitude of majority of consumers. It is for this anxiety that the laws relating to the protection of life and property of the consumers of electricity should not remain dormant in the statute books, we took up this case suo moto."

KERC's order may turn into a powerful tool in the hands of consumers, who have long suffered various cuts and spikes in power with no recourse. Their full rights of quality service, free from any deficiency and threat to life and property from service providers, are a little closer to being realized.