Back to the family

Grounded in its feminist views, Praajak works with runaway boys and young men, to give them livelihood options and help them reunite with their families. Shoma Chatterji reports.
30 December 2011 -

Each year a number of young boys and teenagers run away from their homes to live on streets and railway platforms of Kolkata and the rest of West Bengal. Where do these children go to escape the vulnerability of their lives and livelihood? How do they save themselves from random abuse, criminal acts, and other social victimization? Is it possible to reunite some of them with their families? Can they be helped to open a fresh page of their scarred lives to begin anew?

Praajak, a Kolkata-based NGO founded in 1997 is trying to find some of the answers through its multi-layered programme to give these marginalised children their right to protection, one of the most neglected areas of intervention in work with children and young persons. Prajak's intervention programmes now reach children in 11 cities and towns of the state, and its support programmes for vulnerable children and youth are available in 16 districts.

Praajak focuses on issues of juvenile crime, gender violence, sexual abuse, gambling and substance abuse. A feminist organisation, it fully understands these social problems as partially constituted by the social construction of masculinity as violent practice. Hence, Praajak works mainly with boys and young men to challenge patriarchal constructions of masculinity and evolve workable alternatives that contribute to the removal of gender-based discrimination. The idea of a gender-just society, in which women and men work together to dismantle oppressive patriarchal structures, is therefore organic to each of its endeavours.

Why does Praajak define itself as a feminist organisation though its programmes are mainly committed to rescuing boys and young men? Romit Chowdhury, who is working with the organisation on a one-year research project says, "Feminism understood as a movement to end discrimination on grounds of gender informs our work. Our mission is to arrive at a social order that is gender-just, and cares for the rights of children and young persons. Our work with children and older persons questions patriarchal understandings of what comprises 'appropriate' gender roles for men and women and seeks to establish egalitarian relations between men and women." 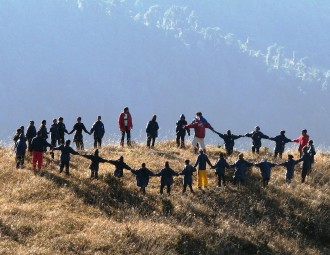 Praajak believes that the patriarchal ideology of men as breadwinners often drives children from lower social-economic groups away from home to earn their own living at a young age.

He adds, "Praajak believes that the patriarchal ideology of men as breadwinners often drives children from lower social-economic groups away from home to earn their own living at a young age. It understands that violent and reckless practices are often seen as markers of masculinity that are socially constructed rather than being an inalienable aspect of men rooted in nature. The persuasive sway of this association of masculinity with violence urges many boys to experiment with drugs and renders them susceptible to substance abuse".

The three programmes of Praajak towards rehabilitation of marginalised street children, their rescue from an uncertain life filled with risks and the possibility of reuniting the runaways with their root families are done under three heads - Muktangan, Sanyukt and Navin Uday.

The main objective of Muktangan is to rehabilitate destitute children found in railway areas. Between 2003 and 2010 the programme reached 1800 children. Of these, 240 children were united to their families and 150 others were placed in children's homes; for these children, going back to the family was not a safe option. Another 120 children were supported through training for various vocations and micro businesses that they could engage in after becoming adults. In West Bengal, Praajak is the only NGO working in collaboration with the Railway Protection Force (RPF) for children living on railway platforms.

"We have built a wide base of local volunteers who check on the family and the children who have been reunited. A survey conducted by Praajak in 2007 of 100 children showed that 35 per cent of children have again run away because of several reasons. To change this situation we have tried to involve local people to create child protection committees to look into the affairs of these children and their families," says Chowdhury.

Muktangan is a rehabilitation programme for children living on railways in collaboration with the RPF and the Ministry of Railways at Asansol, Kharagpur, Malda, and Siliguri supported by Railway Children, UK. The idea of RPF constables teaching children living on railway platforms on a roster system was first shared with the Malda divisional security commissioner, who responded positively. He requested Praajak to find ways of making this programme sustainable and taking it to other station along the eastern railways. Gradually the other stations also warmed up.

Chowdhury adds, "We train RPF personnel in the provisions of the Juvenile Justice Act, and also involve them in annual sporting activities and other collaborative initiatives which engage these children. Muktangan began with funding from Grouppe Developpement, France and Railway Children, UK. Presently the programme is being funded by CRY, and also Railway Children, UK."

He quotes a successful case of rehabilitation. In 2005, Mohammad Sultan, then 11 years old, was a regular victim of violence at home. He left Dholi Sakra, Muzaffarpur and ran away to Asansol. He worked in hotels near the station and lived there. In the first three years of Praajak's interaction with Sultan, he did not give any details of his family, location, etc. In January 2008, Sultan began to explain his roots. His family is well-to-do and has a leather factory in Park Circus. After having lived on railway platforms he was worried that his family would not take him back. He suffered from a deep sense of shame for having led a humiliating life on platforms.

After three years of active and continuous interaction with volunteers of Muktangan he decided to get in touch with his family. "We arranged for his father and brother to meet him. Sultan went back to his family. He is now 18 and is totally involved in the family business," elaborates Chowdhury.

"Our work through Muktangan has a strong focus on gender. These boys are not only susceptible to sexual and substance abuse but are also often forced into situations of conflict with law-enforcers, when in fact they are in dire need of protection. Praajak's intervention in this situation has been to collaborate with the Railway Protection Force, and start this programme. The driving principle in these interventions has been to get the usually 'tough' RPF cadres to become sensitive caregivers. In West Bengal

Sanyukt is a family reunification programme for institutionalised children in government-run homes in Kolkata, Barasat, Behrampore, Bishnupur, Balurghat, Raiganj, and Jalpaiguri supported by Groupe Developpement, France. Navin Uday is a child and youth rights advocacy programme which supports the Coalition for the Child's Right to Protection (CCRP). This is a network of individuals and groups that aims to work for the full implementation of child protection legislations and schemes, activating and increasing the accountability of child protection and juvenile justice systems and integrating child rights programming in rural and urban local bodies. This programme is supported by CRY and the Jamsetji Tata Trust.

The term 'rehabilitation' is never used by Praajak volunteers in their interactions with the children. It is understood that most of these boys ran away by force of circumstance and not by choice. The children are understandably hesitant to share their problems.

"To deal with their discomfort, we use psychosocial workshops and interactions to help them open up and then understand their problems. Once we feel we have understood their problems with their families, we suggest ways of tackling these. When the children share their house addresses with us, we go and meet their families to see what situation exists, whether it is feasible to ask these children to return. This review of the family is then given to the children. The decision, whether to return or not, is taken collectively," Chowdhury sums up.

Praajak workers however, still feel the need for policies that will ensure child protection. At the moment there are no such policies especially those which address the issue of child protection within government homes. Sometimes, the tendency among rescue and rehabilitation homes to reunite children with their families is not backed by an understanding of the prevailing situation or the need to find out why the children ran away in the first place. If this is not done, even after reunification, children who do not find protection within their families run away again.