EDUCATION / MAN ON A MISSION

Building a library a day

Entrepreneur and social activist Pradeep Lokhande’s project of setting up a library every day across rural schools in Maharashtra is helping many poor students see the light of a new day. Ramesh Menon reports on this unique initiative.
28 August 2014 -

Rural entrepreneur and Pune based activist Pradeep Lokhande is a man in a hurry. In the last 675 days he has set up 1,255 school libraries -- almost two every day. He is convinced that education is the key to building a new India and helping millions contribute to the nation’s development in whatever way they can.

With a systematic plan in place, Lokhande has set up libraries in rural schools of Maharashtra, one each day. Till now, he has managed to set up over 1,500 such libraries. Many of these schools did not even have the basic infrastructure to start with. By October 2014, he would have set up over 3,000 libraries in as many rural secondary schools of Maharashtra that will benefit around 850,000 rural secondary school students. 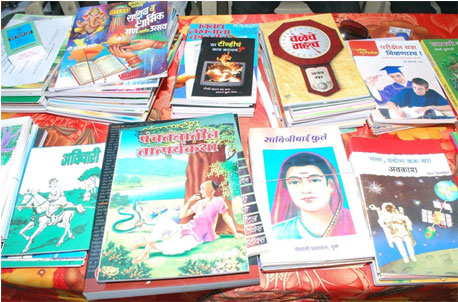 “We will get into the Guinness Book of World Records,” says his daughter Kadambari with a smile, as she actively helps him in this revolutionary effort. Encouraged and fulfilled, Pradeep Lokhande now wants to spread the movement to other parts of India. His near-future plan includes Andhra Pradesh and Madhya Pradesh, before panning out into nearly 85,000 villages of India in other states.

As an entrepreneur working on research for companies wanting to market in rural areas, something like this had never crossed his mind. But in 2009, feeling an urge to give back to society, he travelled around rural areas of Maharashtra with his wife Seemantini to ascertain what they could do to drive change.

He found that children desperately wanted books other than their texts to read. Most of the rural schools had no libraries as they ran on shoe-string budgets. And that was it; he knew what he wanted to do.

It was a moment of epiphany. Christening the project Gyan-Key, (key to knowledge), Lokhande set about motivating people to donate just Rs. 5000 (around $73) that could buy 183 carefully- selected books with messages and could go into a new library.

Finding donors was not difficult, as they loved the idea. Just as Lokhande himself, they too knew that this would transform the atmosphere in poor schools where students came from impoverished families, but had aspirations of growing with India. The inspiring books, he said, would also instill in them values, perspective and critical thinking.

But how did one individual manage to set up so many libraries and in this span of time? Scouring book markets in Pune, Lokhande found many reasonably-priced interesting Marathi books on values, personality development, self-help, communication skills, inspiring life stories as well as fiction.  He put together a bunch of 183 such books totally costing Rs. 6,300. But as he was buying in bulk, booksellers offered it at a discounted price of Rs. 5000.

Prospective donors were told that for this small sum, they would end up helping about 200 students in small schools, enabling them to read books that could influence their lives. Initially, not many believed that a school could set up a library that would whip up interest in students with a meagre investment of Rs. 5000!

To ensure that donors got feedback, Lokhande put in a postcard that would be addressed to the donor in every book. The first child to read the book was supposed to write his impressions about the book and what he learnt from it. The letters touched the donors. Word spread and more donations poured in. “We have succeeded in our movement as we get rigorous feedback and follow it up immediately,” he says. It is in essence good management principles that he is using.

Lokhande remembers a letter from a Muslim mother, acknowledging that her son’s behaviour had positively changed ever since he started using the library. It was really motivating for Lokhande, who later visited the family and gifted the boy Rs. 1000 as a token of appreciation. His mother could not stop the tears welling up in her eyes.

Another girl told him that after reading a book on astronaut Sunita Williams, she had realised that determination was the key to success. Yet another book, ‘Napas mulaanchi goshta’ (Stories of children who failed), caught the imagination of students as it detailed how shortcomings could be overcome, while “Shamachi Ayee” (Shyam’s Mother) had the character of a mother who kept stressing the importance of values.

“The right time to inculcate values is when students are in their early years. Reading makes a great difference. Those who read ask so many questions, have distinct views and are passionate about issues. They also influence their parents who have not had the fortune to be exposed to new thoughts,” says Lokhande.

Lokhande has set up a well-oiled system now. Each library is monitored by a girl who maintains a register recording issuance and return. Payal Jagtap of the Kamalabai Joshi Kenjal Vidyalaya at Wai in Satara district of Maharashtra is one of them.  Her school operates from a make-shift shed. She has developed new confidence as she deftly manages the 184 Marathi books in their library. 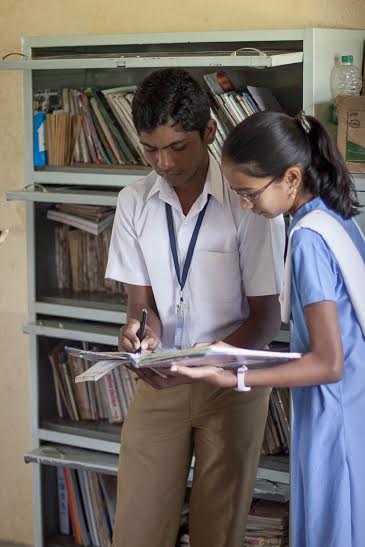 Libraries have a well defined system of recording issuance and returns, driven by a library monitor. Pic: Brian O Donoghue

“The girl monitor learns management skills, becomes a leader and an icon for others with poor communication skills. She gets other students to similarly network with her. As this monitor evolves, it will change the perception of the girl child in rural India and will show them what a girl can do,” says Lokhande.

When the Gyan-Key project started, Lokhande identified the schools and went to them requesting that a library be set up. There were discouraging moments, too. One school did not respond to the 39 letters that he wrote, asking them if they wanted a free library. But he did not give up or allow scepticism to creep in as there were many more examples of schools that were thrilled to get a library.

Now that it has become a statewide movement, Lokhande has ensured that he sets up libraries only in schools that demand it, as they could be expected to have a greater sense of ownership and responsibility. At least five students have to argue in writing why they want the Gyan-Key library.

The principal also has to give a written assurance that if the library is not used for the students, the books would be returned. Strange as it may sound, some schools took the books and kept it locked in cupboards. The school administration in these places argued that the books would get spoiled if students were allowed to take them home.

Unfortunately, it was the students who lost out. This incident exposed the state of many rural schools and those who ran them. When students wrote to Lokhande about it, he got the books back so that it could be given to more serious schools.

R.B. Kalaskar, Chairman of the Shri Bhagwantraoji Kalaskar Vidyalaya in Purna village in Bhatkuli taluka of Amravati district says, “After the Gyan-Key library started, both students and teachers have started reading. They are so enthused that they have donated nearly 250 books. For a small school in the backward Vidharbha region, such a change means a lot.”

Prakash Chabriya, executive chairman of Finolex Industries, Pune, was so impressed with the simple but magnificent idea that he immediately wrote out a cheque of Rs. 75 lakh to set up as many rural school libraries as possible. It was a great boost to the movement.

Says Chabriya to India Together: “I really loved the idea. Imagine how many thousands of children, who had no access to books earlier, would suddenly have them. I thought that even if ten students were inspired by these books and became scientists or other professional leaders in India, it would be wonderful. Even if one of them becomes India’s Albert Einstein, my life’s mission would be accomplished. ”

One creative move leading to many others

This led to a creative burst, as 3,900 students from the schools with these libraries took part, most of them from small villages. There were five prizes to be won and all of them were girls. Lokhande got them to travel to Pune to talk at a press conference talking about their experience as he felt that this would build their confidence. It did.

This further inspired Lokhande to organise a Vichar Spardha where each participant would write a few lines on these two subjects: “This is my responsibility” and “I want to get rid of this”. The outpouring was inspiring. There were over 13,000 entries.

Tenth standard student Akansha Vinodrao Bele from Lalitabai Murarka High School in Pulgaon village of Wardha district in Maharashtra wrote, "I want freedom from corruption, as we all know that to get any work done in this country we have to give bribes but the question that troubles me all the time is, what will the poor people do who do not have money to pay as bribe?"

Ninth standard student Sonali Prabhakar Nimbalkar from Kanya Vidyalya in Bavdhan village of Satara district wrote, "I want freedom from superstition! I come from a small rural area and in my village, even today people take the sick to the temple or to witches who practice black magic. I don't know whether to laugh over it or to call it people's stupidity."

Tenth standard student, Prashant Janardhan Valavate of New English School in Abitgaon village in Ratnagiri district wrote, "Spreading the importance of education is my responsibility. Mahatma Jyotirao Phule changed the face of education in India by starting a school in Pune for girls in 1848. I also want to set an example in the field of education, so that our country can progress."

“This showed what our young children are capable of and what their dreams are,” says Lokhande. He often gets postcards from children with just his name and Pune written as the address. He thinks this is the greatest recognition he has got after starting the library movement.

Most of the 94,000 odd letters he has received thank him for showing the writer a new path or talk about the books they have read. Lokhande himself knows that he is walking the right path, as he sees smiling grateful faces in every school that he visits.

Ramesh Menon is the managing editor of India Legal, a fortnightly magazine. He is also a recipient of the Ramnath Goenka Award for Excellence in Journalism.