A Supreme Court directive on providing parents relief from high tuition comes with an addition - a reminder that these schools are required by law to reserve 25% of their seats free for poor children. Varupi Jain reports.
01 July 2004 -

In an April 2004 judgment, the Supreme Court (SC) of India ruled that all recognised unaided private schools in Delhi, which had earlier been given land on concessional rates, will need to admit 25 per cent of the total intake of students from the economically weaker sections  a stipulation which has caused much discomfort to many schools in Delhi. (Modern School vs Union of India & Others, delivered on April 27 (link to judgement).

Delhi Abibhavak Mahasangh, a federation of parents association moved the Delhi High Court by challenging the fee hike in various schools in Delhi. The Mahasangh asserted that recognised private unaided schools in Delhi are indulging in large scale commercialization of education which was against the public interest. According to the Mahasangh, commercialization has reached an alarming situation on account of failure of the Government of perform its statutory functions under Delhi School Education Act, 1973. One of the serious charges in the writ petition against the unaided recognized schools was transfer of funds by the schools to the society/trust and/or to other schools run by the same society/trust. In this connection, it was alleged that there was excess of income over expenditure under the head `tuition fee' and further interest free loans of huge amount have been taken from parents for giving admissions to the children.

The High Court had found considerable proof that recognised unaided schools were blatantly commercialising education. The High Court confirmed the existence of irregularities in the accounts maintained by these schools. It also declared that the Delhi School Education Act, 1973, and the rules framed under it prohibited the transfer of funds from a school to a society/trust running the school or to other schools run by the same society/trust. Moreover, according to a 1997 Supreme Court verdict: "Where the public property is being given to such institutions practically free... the conditions imposed should be consistent with public interest and should always stipulate that in case of violations of any of those conditions, the land shall be resumed by the government."

According to media reports, while many schools have refused admission to students from economically weaker sections, citing 'no vacancy'. Additionally, some schools have been very clever with the notices, announcing admissions to their institutions in English dailies, which most people from this section of society don't subscribe to.  •  Rainbow children
•  Illiteracy begins at home
•  Discrimination, not inclusion
•  Interact: A common system?

The court also asked the Director of Education, Delhi to ascertain whether the terms of allotment of land by the government to the schools had been complied with. The terms of allotment require not only strict compliance with the percentage of freeships from tuition fee as laid down in the rules by the Delhi Administration, but also admission of pupils from the weaker sections to the extent of 25 per cent and the grant of freeship to them.

According to media reports, while many schools have refused admission to students from economically weaker sections, citing no vacancy as the reason, some others claim to have already admitted the required number but are reluctant to prove it. Additionally, some schools have been very clever with the notices, announcing admissions to their institutions not in Hindi dailies, but in English ones, which most people from this section of society dont subscribe to.

Let us consider the viewpoints of two schools. Mr. S L Jain, Principal, Mahavir Senior Model School (and also Coordinator, Action Committee  Unaided Recognised Private Schools) identifies many problems in the implementation of the SC ruling and finds streamlining of students from economically weaker sections very difficult. Firstly, these students are used to Hindi-medium education and it is very difficult for them to switch to studying in English. Secondly, there are bound to be problems in meeting expenses over and above the tuition fees. Even if we waive off their tuition fees, who will account for their uniform, stationery and other school expenses. Thirdly, they have no parental support in any aspect and the requisite environment at home is utterly lacking. Moreover, children are very sensitive and dealing with the psychological stress of being in the same class with other, financially better-off students can be very difficult, offers Mr. Jain.

"I have no problems in waving off the tuition fee of some selected students. But the government is silent on who is going to make up for the deficit. Neither can I charge more from the parents of the fee-paying students nor is the government giving us special funds. Are we expected to run in loss?", queries Jain. As for why this aspect did not strike the private schools while making the deal with the government, he offers that "the process of acquiring the land from the government was predictably monopolistic. We were not given a chance to negotiate or bargain. We had no choice but to sign on the dotted line. However, now as the implications become apparent, we want things to be debated; we want a forum, a platform. I might add that the term 'concessional rate' is a misnomer. We got land at institutional rate which was slightly less than the market rate but exorbitant nevertheless".

Not everyone is trying to reinterpret old contracts more favourably. For instance, Springdales School on Pusa Road is not worried about fulfilling the stipulations of the SC ruling. According to Ms. Wattal, Principal, Springdales Pusa, the school has been admitting students from economically weaker sections for more than twenty years now. The Integrated Education Scheme was started in 1978 with the objective of giving deserving students from the economically weaker sections of the society (family income below Rs. 5000 per month) an opportunity to receive good quality education and holistic development. The school admits twenty students every other year in Class V under this scheme. 79 students are currently studying under this scheme in the school. Besides waving off the tuition fee, the school provides them with uniform, text books and stationery, extra coaching classes for board examinees, medical expenses and educational trips. 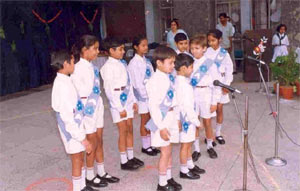 Picture: All the world's a stage at Springdales School on Pusa Road.

The mid-day meal scheme runs for students of class V and VI. It is discontinued in the senior classes so that children do not feel singled out. The school recognises that a typical problem is the absence of a home environment conducive to studies. They students lack basic infrastructure facilities and guidance and support from their parents, to remedy which the school has introduced peer tutoring and remedial classes for scholarship students.

According to Ms. Wattal, the scheme costs us about Rs. 15 lacs annually yet it does not dent our finances. I guess it is all about proper management of resources. We run our school more like an NGO. We have always been, are, and will remain a socially committed school. I think a school is a reflection of the community. We do not charge exorbitant fees like some other private schools do. This is because we are in no money-spinning business. Unlike some of these up-market schools who focus on meeting sophisticated individual needs, we emphasize the role of he community.

To minimize drop-outs, the social-workers visit the students parents especially when the students near 14 years of age. This is because at this age children can legally work in factories etc. We've observed that children are forced out of school at this age to work in carpet, metal and furniture factories near their villages. To prevent this, our social-workers visit the parents to motivate them against this practice, offers Ms. Wattal.

In association with the Ministry of Labour, Government of India, the school also runs Computer and English classes for young adults from the community belonging to scheduled castes and tribes. Moreover, vocational training is offered at the village adopted by the school - Dasgharah. Ms. Wattal has also initiated the integration of physically challenged students in the school mainstream.

However, Ms. Wattal recognises the need to implement the scheme in a scientific and holistic manner with equal orientation and sensitization of the parents, teachers and the school leadership. Indeed, the typically terse statement of the ruling that they (every recognized unaided school) will ensure admission to the students belonging to weaker sections to the extent of 25% and grant freeship to them" does not give much thought to the implications of implementation  perhaps the most crucial juncture where most well-meaning legislations fail. While Springdales School, Pusa Road remains an exception, the ruling embodies too many sensitive and implicit arrangements to be made  mainstreaming of students, minimization of emotional and psychological stress, payment of expenses over and above tuition, addressing the home environment among others  thereby making it difficult for most schools to comply overnight.

One would wish to hear the Delhi Government's side of the story, since ensuring compliance with the contracts made by the private schools is its responsibility. But the Education Minister for the state, Arvinder Singh Lovely, remains utterly inaccessible, even to his own staff! The writer tried to reach him at both his offices at five different land-line numbers and two mobile numbers, but in vain. If the minister has an opinion on putting underprivileged children in school, he's not sharing it with too many others. What the government proposes to do may come to light only when it next appears before the court, to report on how far schools have complied with their original agreement.