Bit by bit, he filled his well

This small plot in obscure Yedapadavu in Karnataka is an unusual manmade forest. Its so thickly populated with plants, that to plant one more, you have to uproot an existing one.

S Ganesh Mallya, 58, is to retire this December. It was his long cherished dream to have his own farm. His house in Mangalore doesnt have the space to grow even potted plants. So about a decade ago, he bought a plot of 0.37 acre here in Yedapadavu, an hours drive from Mangalore. 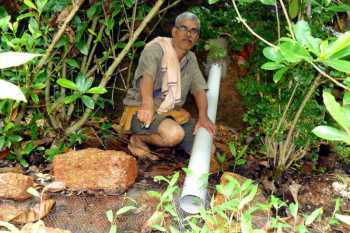 Mallya shows the site where bonus water from the school is percolated into his site. Pic: Shree Padre.

There were borewells all around this plot. You wont be able to manage without a borewell, neighbours and well-wishers warned him. Mallya didnt like the idea of a borewell; it was also more expensive. At this juncture, his colleague Ganapathy Bhat urged him not to lose heart. On inspecting a neighbour's well, he assumed that the water table of the area was good. In this area of heavy rainfall, you might strike water in an open well, Bhat suggested.

Unfortunately, the open well failed. At 45 feet depth, there was water, but not enough to lift in a koda, the water vessel. In that summer, Mallya had to stop the compound wall construction halfway because of lack of water. Deepening the well again didn't help much. If I drew 80 to 100 kodas a day, the well would almost dry up. It would again require three to four days for refilling, he recalls.

One of the labourers who had worked on the deepening project had earlier suggested digging rain pits and catching rain. But Mallya hadnt paid attention to this. After a few months, he came across Adike Patrike, a Kannada monthly run by farmers. It was running a series on success stories of rainwater harvesting done at low cost by ordinary citizens. Mallya thought of trying his hand at this.

It was only after Mallya dug the recharge pits that the well was made live and bountiful. The total cost of his rain harvesting efforts is Rs.3,000. In seven years, the almost dry well has attained ten feet water.

In 2001, he constructed a new house on his plot in Yedapadavu. At that time, he had had three infiltration pits dug  each of the size 4 feet X 4 feet X 10 feet. They were filled the coarse sand and jally (granite stone bits). There was immediate benefit. This land slopes towards the road. The surface run-off that used to wash away lot of top soil and even some sown seeds was stopped. Next year, the water level in the well rose to two feet.

Catching water at every opportunity

Mallya has since not wasted a single opportunity to catch water. Run-off from the neighbouring school made his compound wall collapse one monsoon. Instead of fighting with the school authorities, Mallya raised the wall again, this time leaving a small hole in between. Mallya directs this water into his site through a catch pit. He considers this water that his neighbour treats as waste as a bonus for his own land.

For the initial couple of years, to protect his mango plants, he had kept earthen pots near each of them. (In areas where there is severe shortage of water or on hills where water cant be easily transported, earthen pots filled with water are kept near the bottom of the plants. These ooze out water in small amounts and are usually manually refilled once empty.) Mallya too would manually refill these pots every week. 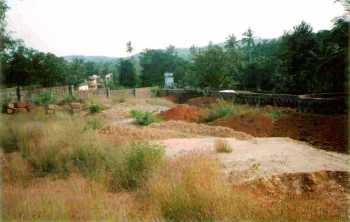 As his conviction in rainwater harvesting increased, he tried out another method. He selected a site where some more run-off was still gathering and dug an infiltration pit there. Along with increasing the subsoil (soil beneath the topsoil), catching water increased the water level to six feet in the open well. Mallya was then able to pump water through hose pipes for regular irrigation.

One foot to ten

Later, he had many trenches dug across the slope of his land. With the digging of trenches, the well water has risen to 10 feet. In addition to this, whatever water flows from the school compound is also put into the earth on the topmost side of Mallya's farm. Now with the help of a one HP motor, he irrigates all his plants in summer once a week. This requires 150 minutes of pumping. At the end of pumping, the water level goes down by 2.5 feet. But it regains original level in three to four days.

There is one more reason for this improvement  the numerous plants and trees Mallya has planted all over the plot. Teak on the borders, sapota, malayan apple, wax apple, bread fruit, jack, coconuts, moringa, banana, bamboo, rattan, bimbli, jamoon and several varieties of mango. With good irrigation, the trees have grown to the height of his two-storied house. 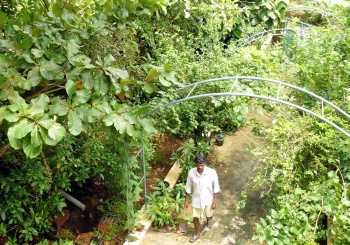 This vegetation also helps to check the rainfall. Mallya never burns the fallen dry leaves. The organic matter that builds up on the soil increases its water - holding capacity as well as percolating ability. The roots of the trees also enhance percolation. With all these changes, except for the walkway and the small front yard, all the rain that falls on the site never goes out. Mallya has been able to create a zero run off situation with his simple water catching techniques.

Though a Sunday farmer, Mallya seems to be more dedicated to farming than many professional farmers. Sunday 9 a.m. to 1 p.m. is his farming time. Come what may, he never misses his weekly farm visit. Sporting soiled shorts, he works hand in hand with Kariya, his helping hand on the farm. He wears a waist belt carrier with tools required to fix broken pipelines or to cut twigs. He grows vegetables like cowpea and ladies finger in pots. A staunch believer in poison-free farming, he seldom uses chemical inputs.

Ganapathy Bhat has been advising Mallya on farming methods. Says Bhat, Though a mathematics teacher, he never compares the income from his farm to his investments. He is keenly interested in new varieties of fruits and other plants and buys them at whatever cost. He happily offers these seeds to others. He never sells his fruits and vegetables. Instead, he gifts them to friends.

In seven years, Ganesh Mallyas almost dry well has attained ten feet water. Neighbour Diwakar Karanths farm is still below the slope. Earlier, his well used to dry up by March. Now it has water enough to run the motor till summer end.

Initially Mallya had spent Rs.35,000 for the well. Later re-deepening, inserting cement rings, etc. cost him another Rs.25,000. But it was only after he dug the recharge pits that the well was made live and bountiful. As he has used the leftover sand and stone bits to refill these pits, the total cost of all his rain harvesting has amounted to only about Rs.3,000.

Drawing from his own success in such a small land and very little expenditure, Mallya had suggested the headmaster at his school to take steps to percolate huge run-off from their playground. Says he, If not the school, the society would have benefited; students would learn from this. But his suggestion has not been heeded.

The Sunday I visited Mallyas farm, he had been made an offer by the school. Half a days work on Sunday as examiner would have brought me Rs. 900, he says. But I said, today is my farm day and excused myself. After his retirement, Mallya intends to make his farm house his headquarters. Its purely for my satisfaction that I have been farming, he says. But his experiments with rainwater harvesting are examples others can benefit from.