Shortage of water has been a tale of woe in Rajasthan for decades. But this year, the state's largest circulated Hindi daily, Rajasthan Patrika, has motivated around 155,000 volunteers to clean up 388 discarded traditional ponds and wells. Ramesh Menon reports from Jaipur.

It is a story that is heartwarming. It is a story that sends out rays of hope. And it is a story that shows that all it requires is for people to take initiative without waiting for the government. Like every year, this year too, the sun has been burning bright in the sky all over Rajasthan. Temperatures are swinging between 40 and 48 degrees centigrade. And water has always been in short supply in the desert state. 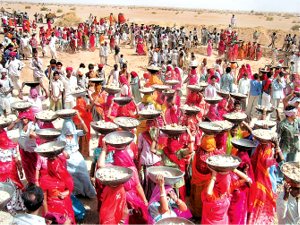 The management of the state's oldest newspaper, Rajasthan Patrika, celebrating 50 years this year, thought of an innovative plan. It started a daily campaign in the paper called "Amritham Jalam" (Water is nectar) where people were urged to come forward and clean up all traditional water harvesting systems that were lying unused and dead. The rest of this report is about what happened in response.

Hundreds of years ago, rulers in the princely state had created scores of traditional water storage systems so that rain water could be harvested and it could be put to use all through the year. It also helped to recharge ground water channels.

Maharajas, royal families and businessmen invested huge amounts on these structures. Thousands of skilled sculptors and masons worked on it trying to reflect the heritage of that time. Some of the magnificent structures were between a thousand and one hundred and fifty years old.

But after independence, piped water slowly made its entry into the towns and villages. Water came into houses for the first time and it changed the way people looked at water and the way they lived. The traditional water storages were ignored. Lack of maintenance made them crumble. Secondly, even if there was no piped water supply, the government dug thousands of tube wells in villages and even urban areas.

When the first rains came in late June, the first signs of magic appeared. Water slowly started trickling into the reservoirs and wells.

The newer generations had thus seen water come from tube wells and government water supply sources. The importance and significance of these water-harvesting sources was lost. The ponds fell into disuse and became stagnant dirty polluted areas. Garbage was often dumped into it and slowly most of them filled up. With traditional water harvesting and storing systems being ignored in areas like Jaisalmer and Jaipur, ground water recharge collapsed. The water table was plummeting by five to ten feet every year.

Rajasthan Patrika sought to revive traditional wisdom by urging people to give some of their time and energy to revive the water bodies. When the paper started its campaign, it had no idea that it would become such a mass movement. Soon, people from varied age groups were at work desilting tanks and restoring traditional wells. They got their hands dirty, but it was the dream of seeing water once again that motivated them.

The women added a dash of colour in their bright saris as is the norm everywhere in the desert state. When nature is grim, people add colour to it. They braved the burning sun where the mercury hung between 45 degrees and 48 degrees centigrade. In places like Jaipur, where piped water is still available at scheduled intervals, people still came forward. The realisation was dawning that water has to be conserved otherwise even whatever was available water will be lost.

In the span of a little of sixty days beginning May and through June, citizens have worked on as many as 388 water harvesting structures, says Sukumar Verma, deputy editor of the newspaper, who was pulled out to supervise the project. He adds that 155,038 volunteers have clocked around 465,114 man-hours so far. It is unimaginable for the government to have harnessed such resources or found the finances to pay for such work.

The campaign is being supported by several organisations and individuals. Verma reports that Hindustan Lever Limited contributed Rs 20 lakhs and contributions from MPs, MLAs and other organizations have totalled Rs 5.18 crores. (1 crore = 10 million, 10 lakh = 1 million). MPs and MLAs have pulled out money from their allotted development funds to make much of those contributions. The money will be used to further renovate water structures that are in a state of disrepair and also be used for maintenance.

The encouragement to launch this statewide movement came from a similar small effort that the paper did last year. When the newspaper appealed to people in Jaipur and surrounding areas to clean up water harvesting systems, it got an encouraging response. So, this year, the paper decided to run a campaign all over the state.

"Instead of getting at each other's throats after a few years to get a bucket of water, we thought let us today ensure that we never will have to fight for water. We got into it thinking that this is how a responsible media should be. But after such a tremendous response, we know that this is going to be an ongoing revolution. All that people wanted was motivation. Now, they have realized their power. They do not need the governments help to put things right, says Verma.

Says S N Dave of the United Nations Children's Fund, Jaipur: "It is an amazing instance of not only what the media can do, it is a great example of how people can get together to do something that is going to change not only their attitude towards water in Rajasthan, but also the faith that collectively people can do so much to change the stark realities around them." Dave is a Project Officer with the Water and Sanitation group.

The Amritam Jalam campaign was quite an eye-opener. Across the state, thousands of volunteers learnt the importance of respecting traditional wisdom. It broke down caste and communal barriers that are strong in the state. When the elixir of life was at short supply, the focus obviously was to work together to get it back again. Many of the reservoirs that were desilted like Jaganathsagar in Jaipur were lying unused for more than 20 years.

When the first rains came in late June, the first signs of magic appeared. Water slowly started trickling into the reservoirs and wells. Girdharpura Ki Talai and Panchya Ka Talab in Jaipur city had water flowing in, soon after it was cleaned with people working for over a month. The joy was inexplicable for those who had earlier sweated in the heat. Both water bodies were lying dry, unused and dirty.

As the initiative snowballed into a peoples movement, politicians were not willing to be left behind. At Banswara, State Health Minister, Bhawani Joshi, joined in as a volunteer clearing a dirty stagnant pond. As many as 25 tractor trollies carried away the silt from the reservoir that was lying beneath ten feet of stagnant polluted water.

Urban Development Minister, Pratap Singh, was so impressed by the work in Chavra, in his constituency that he offered a lakh of rupees from development funds allotted to him. Social Welfare Minister, Madan Dilawar, was so exhausted after removing 50 head loads of garbage from a reservoir in Attru in Bara district that he almost collapsed and had to be rested.

Says Verma: "This campaign has kindled a new spirit in the people. In the next elections, they are definitely going to raise questions on water management. Politicians have no choice but to be with the movement and be seen supporting it." The campaign and voluntary work has taught a lot of lessons to thousands of youngsters who will hopefully carry it on year after year.

"The challenge now is to now educate people on how expensive it is is to purify drinking water and that there is nothing wrong to penalise those who waste water", says Dave.

Complex problems did surface. After volunteers cleaned up the historic Talkatora pond in Jaipur that is a symbol of the pink citys culture and heritage, some unpleasant truths emerged. The pond built by erstwhile rulers had numerous rainwater channels leading to it. But all around, the land had been encroached by the rich, blocking water flow through the channels. The abandoned pond was a wild area with tall grass and weeds; its value forgotten all these years. People now realize that the challenge is to discover where the channels have been buried and how it can be rebuilt despite the encroachments.

Rajasthan has always been a water deficient state. Though it is India's largest state with a surface area of 3.42 lakh sq km constituting 10.4 per cent of Indias surface area, it has only 1.4 per cent of the countrys water resources. Rainfall is poor. It is not unusual to talk to a child who is four years old but has never seen rain in some parts of the desert like Barmer and Bikaner. The state averages an alarmingly low 20 cm in just about 15 days of rainfall in a year.

The challenge now is to harvest this rain as much as possible, so it can be stored to meet the entire years needs. Sounds impossible, but traditionally individual houses in desert areas like Jaisalmer used to ensure that every drop of rain water on their rooftop and around was harvested-and then used all through the year.

It is not just Rajasthan's problem, the newspaper has reminded its readers. Water is a resource that is drying up in India. The earth, it told readers, had 140 crore cubic kms of water, but only 2.7 per cent of it was fresh and out of this, only a miniscule 22.6 per cent was ground water.

Past to the future 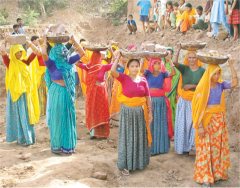 Women at Jaipur cleaning up a silted pond. Pic: RP

Rajasthan has been on the trade route since medieval times. Indian traders would travel through the state on their way to Malwa in Madhya Pradesh. Then, they would move to Kutch in Gujarat and further on to Afganisthan and southwest Asia. The trade routes in Rajasthan were dotted with what is locally known as "Bawris" that stored water. It could be a reservoir, pond or well. It catered to the traveling traders and the local populace. Walls along the route tell their own story with engravings. There are chronicles right from 1400 A.D. to 1850 A.D. that credit construction of the "Bawris" to Lakhi Binjara.

But how can one person have constructed these structures for over 400 years? The answer is not hard to find: "Lakhi" means, lakhier and "Binjara" means, businessman. Corporate Social Responsibility being talked about in current day business houses and high profile business schools is often touted as a modern concept. But hundreds of years ago, Rajasthan had already shown what responsible businesses could do.

Says Gulab Kothari, 56, Rajasthan Patrika's owner and editor: "Water is the only wealth we can leave behind for future generations." If the current tempo continues, Rajasthan might just live up to this lofty ideal.