Hasmukh Dhumadia narrates his experience of helping the local residents of a village in Gujarat in their fight for environmental justice.
31 May 2017 -

Gujarat, located in western part of India, has the longest and the most industrialised coastline in the country. Majority of the mangroves on this coastal stretch are found in Devbhumi Dwarka District of the state. The district is on the southern shore of the fragile Gulf of Kutch. Back in 1982, 110 sq kms in this district was declared a Marine National Park, a first of its kind for coastal and marine wildlife protection.

Not too far away from this protected area, is BLA Coke, a company that produces metallurgical coke. In 1989, the company received its first formal consent from the Gujarat Pollution Control Board to operate its plant in Arambhada village in Mithapur. They claim to be the first company to produce premium grade Low Ash Metallurgical Coke (LAMC) in the state. They import their raw material, i.e. the coking coal from Australia and the finished product is supplied to various customers in Gujarat and other states of India.

The various operations to produce coke including “coal charging, coke pushing, quenching, screening, stocking and loading”, are not without impacts. The manufacturing and storage site is surrounded by grazing and agricultural land used by both the Maldhari and Rabari communities, who have been engaged in these livelihoods for generations. 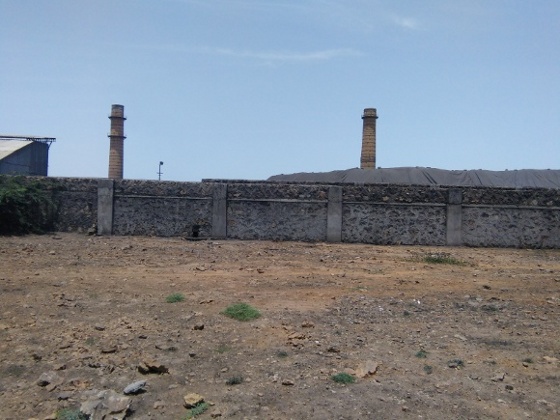 The Arambhada village has these communities as its primary residents. They complain, “...the coal dust from the company is not just a problem for human beings, even the cattle have to breath it in whenever they go to graze. The dust settles on the grass there, which is their food.” In the monsoon, when the grass is thriving on the grazing lands, it attracts even more dust. The foggy conditions in this season, say the villagers, increases the intensity of this impact.

The dust from the coke oven plant has other impacts too. When the air blows from the west to east direction it impacts the mangroves and the fishing areas.

According to a study on impacts of coal handling on mangroves and its ecosystem by Gujarat Ecology Commission (GEC), “....around 18 million tons of coal is consumed in Gujarat state annually, mostly accounted for power generation. None of this coal is produced in the state and it comes mostly from Madhya Pradesh and about 4 million tons are imported coal as straight or in blend which by carbonization produces hard coke known as coking coal depending upon coking capacity.”

The report also corroborates, what the villagers in Arambhada say, when it indicates, “The areas near the marine national park and grazing land to such fugitive emission causing stressful environment for the nearby ecology. Coal particles can enter the marine ecosystem through variety of mechanisms like natural erosion of coal bearing strata through which the particles can leach into soil and can be transferred to marine areas.”

A law to control impacts

In 2010, the Gujarat pollution control board (GPCB) issued a specialized set of guidelines for handling of coal all across Gujarat. Termed as the Coal Handling Guidelines, it drew its mandate from the clauses of the Air (Prevention & Control of Pollution) Act, 1981 (Air Act).  The implementation of these guidelines is mandatory for all industrial, infrastructure or power generation units across the state. It was included in conditions of the consent to operate (CTO) issued by the GPCB as mandatory required under Air Act.

This 28-point document has a range of safeguards, which if followed can help reduce or mitigate the impact of the use of coal in units such as BLA coke. For instance building of a 9-meter wall and the coal heap of a maximum 5 meters, prevents the coal dust from escaping the manufacturing facility.  There are also safeguards mandating the covering of trucks with tarpaulin during transportation to avoid spillage. Water sprinkling, tree plantations are to also be carried out by units such as BLA coke.

Can Rule of Law can help?

Karubhai Nayani, a resident of Arambhada village had complained many times to the District collector and other local officers who he thought could address the impact of coal handling. But he and other villagers did not know the right government institution and specific violations of environment laws; leave alone about the company’s consent to operate (CTO). The BLA company in its revised CTO dated June 6th 2014, had a clear condition stating that the company shall have to comply with the coal handling guidelines.

When I visited the Manek chowk area in Arambhada back in March 2016, I met  Karubhai, a supplier of housing material from the village. As I lived not too far away from the area, I was aware that there was dust coming out of the BLA coke plant, but was able to find a way forward only by understanding a specific law, in this case the Gujarat PCB’s coal handling guidelines. I thought, the villagers and I can actively try to seek a remedy for the problem there were facing. 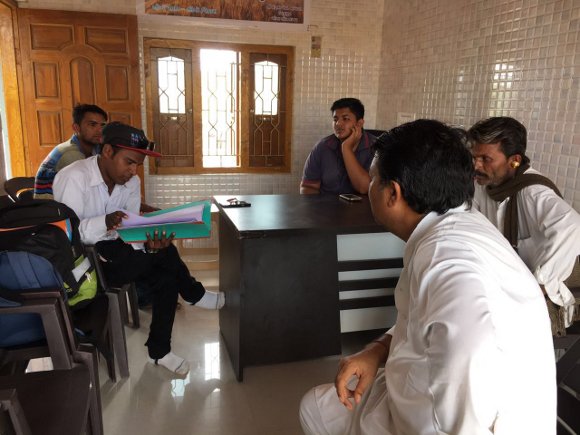 The author with the local residents checking the clearance conditions. Pic: Hasmukh Dhumadiya

Karubhai, I and a few three other villagers tried to find out which law is being violated and how. My colleagues in the CPR-Namati Environment Justice Program were with me in this journey.  It is through this we figured out the a link between the violation of the coal handling guidelines and impact of the dust on the grazing lands, agricultural areas and also the sea-front and fishing. When Karubhai and others read the translation of the guidelines in their local language Gujarati, they said, “If the guidelines are complied with, the problems will surely reduce, especially with the construction of the compound wall of 9 meters height.”

How villagers found a remedy

Karubhai and other villagers filed a complaint on the violation of the condition number 2 of the CTO issued to BLA Company. It was the non-compliance of this, which was causing coal dust to settle on grazing and agriculture land as well as impacting the mangroves of the area. The complaint letter was submitted to GPCB on 3rd May 2016. Within one week, i.e. on 7th May, GPCB officers from the regional office visited the site to ascertain the impacts and violations.

When they met Karubhai, he spoke the language of law. He said emphatically that the impacts being felt by him and fellow villagers are because the coal handling guidelines are not being followed.

But the story did not end there. We had to work together to find out what the inspection report contained, as it was not sent to us. Using the Right to Information Act, 2005, Karubhai filed an application before to GPCB and received the inspection report only after 30 days inspection report. What we realized was, on 18th May 2016, soon after the site visit,  GPCB issued a show cause notice to the company and also gave written suggestions on how to control the impacts.

The problem still did not stop. It is only after Karubhai sent another complaint letter to GPCB on 19th September 2016, the GPCB revisited the site. On 5th October 2016, the GPCB visited the area and gave further recommendations to implement the conditions of CTO. They directed that the conveyer belt should be covered and there needs to be water sprinkling and housekeeping within and around the premises more frequently. The recommendations also included the implementation of the coal handling guidelines, especially for the company to build a 9-meter wall to restrict the dust from flying out the premises. The company was also instructed to decrease the height of the coal heap within the plant premises, which is also required by law.

Rule of Law to address our problems 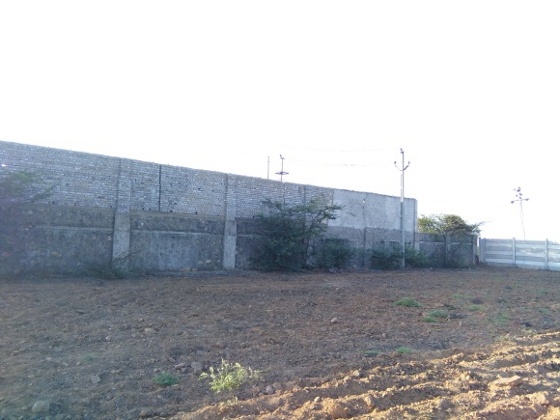 Wall surrounding the back of the company raised to 9 m after the complaint. Pic: Hasmukh Dhumadiya

As I write about the issue, the BLA Coke Company has begun implementing the coal handling guidelines. The coal heap has decreased, neatly covered trucks are seen around the site transporting coal. The 9-meter high wall has been constructed at the rear boundary of the company. We are monitoring whether the impact on the grazing and agriculture land has reduced. A GPCB vigilance officer visited recently and site inspection report of 11th January 2017 confirms that compliance is taking place and impacts are likely to reduce.

But more importantly, Karubhai and the others I worked with have learnt the law.  Next time around they would be able to solve their problem themselves.

The author is an Enviro Legal Coordinator with the CPR-Namati Environment Justice Program.