Residents of a municipal dumping site fight back

The women of Meghpar village of Kutch District are fighting the big port town Gandhidham municipality which is dumping its waste in their village. Vimal Kalavadiya and Shvetangini Patel report from Kutch.
20 April 2016 -

Meghpar, with a population of about 2000 engaged in different occupations such as pottery, masonry and other labour, would have been just another village in the Kutch District of Gujarat. That was till the time a huge solid waste dump, carrying all the waste from the huge port town of Gandhidham and its municipal area, began finding its way to the edge of this village. The town is located about 10 kilometres from Meghpar.

Burning of this waste created large quantities of fumes and stench in the village; cattle strayed into the unfenced site but the mountain of the dump just kept growing. The problem had been continuing for a good three years and by late 2015, the residents of the village, especially the women, were determined to find a remedy. 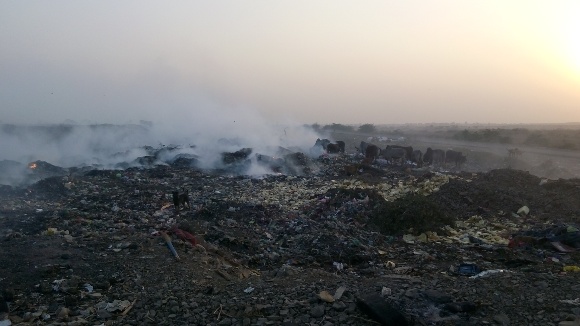 Burning the waste of Gandhidham at Meghpar. Pic: Shvetangini Patel

Chandaben Joshi, who is associated with Ujjas Mahila Sanghathan (UMS), an organisation working around the area took the lead. UMS had recently collaborated with the CPR-Namati Environment Justice Program, where the two organisations are partnering to bring in remedies for such problems ensuring legal compliance.

Is there a legal hook?

Whether a legally tenable remedy was possible in Meghpar needed to be assessed. When we began gathering more information and did background checks on the issue, the first question that came to mind was this: How is this site complying with the laws related to municipal solid waste, especially the provisions of the Municipal Solid Waste (MSW) Rules, 2000?

In cases such as Meghpar, which are bearing the burden of all the waste that towns like Gandhidham create, who is to monitor the waste disposal and management? Are people aware of the waste being created and handled?

The people of the village and the team associated with the partnership on environment compliance had many questions. They wanted to understand what the experience at other waste dumping sites in India had been. When there is a problem, whom do you go to?

Looking for a remedy

UMS and CPR teams visited the village along with Chandaben and held meetings with a group of women of the village who were actively trying to seek remedies for the problems they were facing.

The women said, “We have been living here for many years now, but will have to move to another place if the problem is not resolved. The municipal solid waste disposal site is being operated in a very bad way. They are dumping all types of mixed waste and throwing even dead animal carcasses at the site. The site catches fire most of the time; there is no boundary to protect the adjoining land which also gets polluted by the waste. People have to suffer from the stench of decaying animal bodies and mixed waste.” 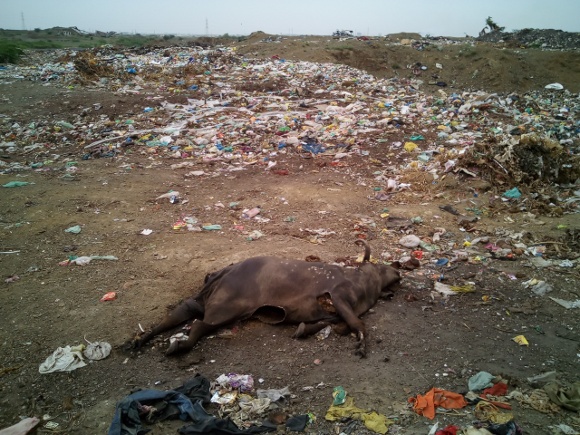 The women added that the problem had been shared with the municipal authority but received no response. They also pointed to reports in the local newspaper that spoke about the problem.

At one point, frustrated with no response, the women had walked over to the site and attempted to stop the operator from dumping waste on the site. The site operator simply filed a police complaint against the group of women. This was a push back at one level, but they were not willing to give up so easily.

Finding a route for the remedy

Central to the community paralegal approach of the partnership program, the first step was to find out if any law was being violated by the municipality and what the law in particular was. This would be critical for assessment of whether the problem was created by a legitimate process or if there had been violation of laws.

That in turn would help them gauge the likely place or authority from whom they might get a response. For example, if the Gandhidham municipality was found to be a violator, approaching them would perhaps not be the best idea, they thought. As when they approached the municipality earlier, it will not respond to their complaint.

This exercise revealed the existence of clear guidelines put forth by the Central Pollution Control Board as the Municipal Solid Waste Management Rules 2000. The group did a collective reading of the rules with the women; the clauses of the law applicable to the Meghpar MSW site were read out in the local language Gujarati so that all could comprehend. 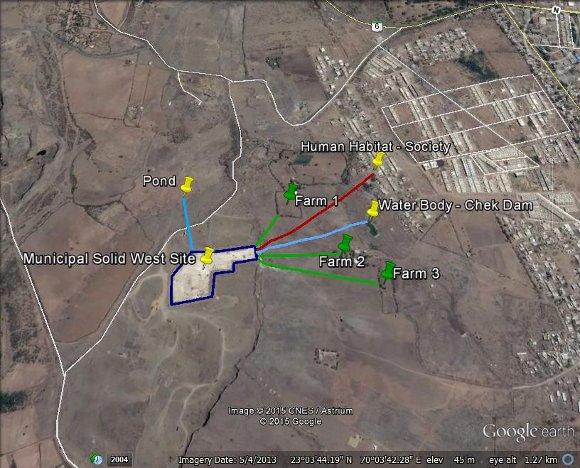 The next step before the group then was to get access to these documents to ascertain whether these steps had been followed. Using the Right to Information Act, 2005, the documents were accessed within 40 days.

There was now a second collective review, in the same way that the MSW Rules had been read out. The documents revealed that the several MSW rules had in fact been violated:

These and several other conditions formed a part of a fresh round of complaints sent to the GPCB citing the impact and linking it to the violation of MSW Rules, 2000. However, there was still no response.

Preparing to demand a legal remedy

After almost a month had passed from the filing of the complaint, the women’s group decided to go visit the regional office of the GPCB located 56 kilometres away at Bhuj. The objective was not to have a heated confrontation over their inaction. On the contrary, the team and in particular, the enviro-legal coordinator along with the women’s group sat down to prepare for the meeting, just as they would before heading into an examination. They wanted to know the legal provisions and understand the violations before they spoke to the concerned officials.

Since the group had several older women, many of them illiterate, creativity was the key. The coordinator took the lead and developed a basic game to help them understand the MSW rules, 2000.

This game included pictorial representations of the relevant clause of MSW rules. Each picture was numbered. The women had to then correlate the specific clause related to the issue at hand, onto a blank display sheet, and in the process learn the law. It was time now to visit the GPCB regional office.

When the group reached the GPCB office and asked to meet the regional officer, they got a response that he was busy in a meeting with other officials visiting from New Delhi. But the group of women insisted, and demanded to meet all the officials including those who were visiting from the central office. After three hours of wait and persuasion, they succeeded in getting their way.

It was no ordinary meeting. The women raised the issue, with a point-by-point reference to the law and the violations by the site operator before the regional officer and other present. This, they pointed out, was part of their written complaint as well. The arguments were convincing enough for a site visit by the GPCB.

At 1 pm on 25 January 2016, two officials came to Meghpar. Four women and one man met and spoke to them. The women accompanied the official team to the site and also insisted on seeing what was being noted. Photographs of stray cattle roaming free in the dumping site were shared once again with the officials. 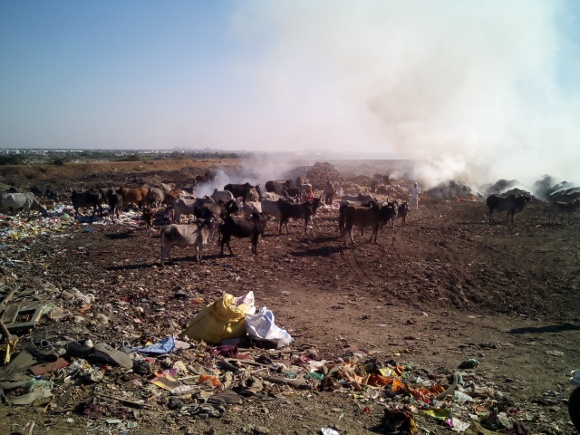 An official questioned, “How can we ask the cow not to enter the dumping area?” to which one of the women responded, “Agreed we can’t, but we can surely have a fence as required by law, so that they don’t stray away and eat the waste.”

Interestingly, the officials also tried to convince the women that they don’t have powers under the law to relocate the site, which rests with the municipality. The women, empowered by the law, pointed to them to a condition in the authorization letter, which said that, “GPBC have the powers to revoke the authorization itself if the safeguards listed are not followed.”

Unfortunately, despite a show cause notice issued to the operator of the site, blatant violations continue till date.

On 3 March 2016, GPCB had issued the notice to the Gandhidham Nagarpalika. In the notice they said that at the time of the site visit, they observed a lack of compliance with the Municipal Solid Waste Management rules, which is causing grave environmental impacts. The notice adds that this is an offence under the Environment Protection Act 1986 and has sought the municipality’s response, as is usually the case with such procedures.

Meghpar’s women, meanwhile, are clear and focused on their goal. Even as this story is being written, they are planning their next steps.

Vimal Kalavadiya is with the CPR-Namati Environment Justice Program and Shvetangini Patel is with Ujjas Mahila Sanghathan. Both are involved with a collaborative research based legal empowerment project between the two organisations.