Saw mills in a see-saw

Concerned at the alarming decline in the forest cover of the country, the Supreme Court has sought to regulate the operations of wood-based units. But success has been limited; not all the illegal operations have been shuttered, and many others face the loss of their businesses from the Court's blanket orders. Kanchi Kohli reports.

In the last decade, the Supreme Court has played a key role in influencing policies related to both conservation of natural resources and people's livelihoods intricately linked with them. One pioneering case heard by the Court is T N Godavarman Thirumulkpad vs. Union of India, which has dragged into its second decade of hearings now! This case, along with Environmental Awareness Forum, Jammu and Kashmir vs. State of Jammu and Kashmir, led the justices to reinterpret the Forest (Conservation) Act of 1980. In December 1996, the Court ordered that the said Act would include within its scope not only "forests" as mentioned in government record, but all areas that are forests in the dictionary meaning of the term irrespective of the nature of ownership and classification.

This dramatically expanded the breadth of activities that would be considered forest-related, and a number of industries were immediately touched by this reinterpretation. One area that has been directly influenced is the functioning of saw mills, plywood mills and veneer mills. These wood-based units were operational all across the country using natural and plantation based timber, for units producing furniture, match sticks, wooden beams and so on. However, with the depleting forest cover all across the country, unregulated operation of wood-based industries would mean tremendous pressure on the forest resources. And in the years that followed, the Supreme Court took a number of steps to rein these in.

The October 2002 order led to a flurry of applications for the grant of approval by the CEC. There was no way the CEC could take on the case of each individual mill or industry owner, and grant a license. So, it took the view that it would, along with every state government, work on a policy for the grant of licenses. Such a policy would bear in mind the carrying capacity of the forest vis-a-vis the number of units that could be in operation. It would be used to define a range from the forest area within which units could not operate. The CEC thus would only facilitate a process through which the final licensing authority, which is the state government itself, would grant licenses to mills.

The discussions around the licenses issued to these saw mills have presented some startling facts in the last few hearings of the CEC. Policies for grant of licenses to saw mills, plywood industries and veneer mills are only in place in a few states like Himachal Pradesh, Rajasthan and West Bengal, and in these states, the governments - based on set criteria - have begun issuing licenses to these units. While this is certainly noteworthy, the overall direction of the Court's process is most important in states like UP, which account for a large share of the milling operations in the country; a recent Forest Case Update (June 2005) found 48 of 140 applications before the CEC to be from this one state alone.

The situation in UP

At a meeting-cum-hearing of the CEC on 28th June 2005, 48 cases with reference to the grant of licenses to saw mills, plywood and veneer mills in different districts of Uttar Pradesh were listed. The conference room was full with advocates representing owners of units awaiting a decision. When the matters came up for hearing, the Member Secretary of the CEC, M K Jiwrajika clarified yet again, "the CEC cannot deal with individual grant of licenses, and needs to develop a policy or principles for the state of Uttar Pradesh. If it has to do this like [sic] in the case of West Bengal, Himachal Pradesh or Rajasthan, it needs to start with some basic information from the state government, which includes questions like the overall availability of timber in the state. However, the state government of Uttar Pradesh has not cooperated in this regard at all, and as a result a large number of applications are pending." 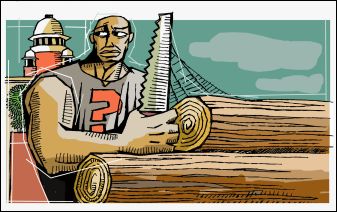 For the mill owners, this was bad news. A blanket closure order from the judiciary had shuttered their operations and put their businesses at risk, and thereafter they were at the mercy of information being provided to the CEC by their state government to have any hope of re-opening.

Ironically, the Uttar Pradesh government, for the last eight years, had been issuing licenses anyway, contrary to the Supreme Court's March 1997 order. This is something that begun to emerge at the 28th June 2005 hearing, and was further clarified at a later hearing of the CEC on 8th July. Throught a Contempt Petition, an applicant had questioned the functioning of 14 saw mills in the state. The government, in its response, clarified that only 6 of these units were operational, with 'valid licenses' issued by the state government! The CEC was startled by this - had the Supreme Court orders in March 1997 not prohibited the state government from issuing any licenses without the CEC's approval? This question immediately grasped by the Committee.

As the discussion proceeded the CEC pointed out that prima facie it appeared that many veneer mills or plywood mills in Uttar Pradesh had not been closed following the Supreme Court Orders. This is because the Supreme Court order has been misinterpreted in Uttar Pradesh as having being applicable to saw mills only, and not to plywood and veneer mills. It wasn't clear why UP arrived at this understanding, or whether the state recognised that its interpretation was different from those applied in other states. The discussions also threw up a scary reality - that there might not be any consolidated record of the number of wood-based units (saw mills, veneer mills and plywood units) that are operational in the various districts of Uttar Pradesh.

The issues at hand are complex, and the CEC is attempting to decipher them state to state - a possibly lengthy process. For the applicants awaiting a grant of license, the wait can seem interminable. The smaller units may be especially affected; it is quite likely that there are large exploiters among the lot, and the focus on conservation is an attempt to check their actions. But livelihoods are at stake too.

An application filed by Harish Sood of Sood Enterprises (Bareily, Uttar Pradesh), brings to light the exasperation. The entire wood requirement for the Veneer Plant is to be sourced from agro forests nearby and uses only non-forest species like Poplar and Eucalyptus. In December 2002, the applicant first petitioned the Divisional Forest Officer, and in response was told that permission would need to be taken from the Central Empowered Committee, as per the 30.10.2002 order of the Supreme Court. In January 2003, he filed an application with the CEC for grant of a saw mill license. Around July 2004, and additional affidavit was filed to raise the issue of the delay in the grant of license. The matter was heard on 28th June 2005 along with many other similar cases, pending for the grant of licenses. Among other things, the application says, "due to the delay and the general inaction on the part of the Respondents to create a favourable climate for investment in agro-forestry industries, Poplar and Eucalyptus wood is transported to the neighboring districts of Haryana where large number of plywood and veneer factories have come up."

Undoing the knots in which this issue is tied could still take a while. For now, the affair reads like a tale of political intrigue: the higher judiciary taking up some of the administrative functions, and the state administration returning the favour by reinterpreting the Court's orders. In this tussle, while some owners simply contine operating unmindful of the Court's views, others - either the more law-abiding ones, or the ones unlucky enough to be noticed by the UP government - find their businesses slipping away from them.