In July, 18 Nobel laureates met with over 500 young scientists from around the world in Germany. India sent 22 researchers. The meeting threw up many questions pertaining to the practice of scientific research in India. Varupi Jain has more.

The Indian team comprised 22 young researchers and students in their early science careers. The 10 female and 12 male students were from prestigious institutes all over the country including Lady Hardinge Medical College and the All India Institute of Medical Sciences, Delhi, St. John's Medical College, Bangalore, the Indian Institute of Technology, Roorkee and several others. Their subject areas fell broadly in the field of medicine and physiology with specializations like microbiology and immunology, evolutionary genetics, cancer biology, Parkinson's disease, etc. 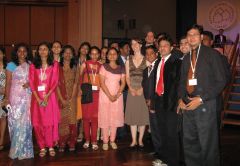 This year, the interaction focused on the dialogue between natural sciences and the humanities to mark the German "Year of Humanities 2007". As a part of the opening ceremony, a panel discussion "Science and Humanities" was organised, in which the heads of the European Research Council, Royal Society, German Science Council and other noted academicians participated. The Meeting was inaugurated by the President of the Lindau Council, Countess Sonja.

One of the most exciting discoveries was that "Nobel laureates are humans too", says Parul Tripathi, Postdoc fellow, International Centre for Genetic Engineering and Biotechnology, New Delhi, who attended the meeting. Contrary to the popular super-human halo which we commonly associate with Nobel laureates, the students were thrilled to discover the normal, everyday aspects of these exceptional individuals. Through their lectures and anecdotes, they inspired the young scientists with the "passionate curousity" which Einstein spoke of and gently brought home the point that the road to success in the sciences is long  where only patience, perseverance and hard work can help.

While rubbing shoulders with Nobel laureates was itself an enriching experience for the Indian delegation, the interaction at various forums during the meeting threw up many questions pertaining to practice of scientific research in India and developing countries.

Many laureates stressed the need to have good mentors. "Currently, more often than not the supervisors aren't doing their jobs properly. They are often more worried about their name when it comes to a publication," says Tripathi. According to Dr Satish Jain, Director - Indian Epilepsy Centre, New Delhi, "mentorship has always been a problem in India. Especially in smaller towns, the juniors or young scientists perform all the basic research and the mentor is more concerned with getting his/her name into the publication, often as the first author!" This can be truly demotivating for the students and needs to be curbed in every possible way. Jain has plenty of international exposure himself. He has been a Fullbright scholar, has taught in the United States and has researched there, and is a member of many international medical associations.

"What keeps funding and state-of-the-art research from reaching the field level is the long chain of bureaucrats right up to the Ministers."

Secondly, the implicit tension developing medicine for the diseases of the developing and developed world continues. A laureate in a panel discussion pointed out that the focus remains on working on problems that are affecting 3 per cent of the world at the cost of the problems affecting the remaining 97 per cent. "When tuberculosis was on decline in the west, funding for research in TB stopped because it was considered that the disease was no longer their problem," notes Tripathi. Most often, scientists and clinicians of the developing world need to identify their own priorities and devise solutions. Tripathi says that in the context of developing nations, issues and their solutions are not limited to finding a technological or scientific way out of the problem but needs to include measures of advocacy as well.

It is also imperative to consider another aspect of this issue. While millions of dollars are poured every year into cancer research, multiple sclerosis, heart and stress-related ailments, thousands of people in Africa and Asia continue to die of diarrhea and malaria. Often, the national governments in developing countries do invest in eradicating diseases like malaria, polio etc. and state-of-the-art research does take place. However, first the schemes and funds do not completely reach their intended beneficiaries. Second, there is a huge gap between research published in journals and its practical application on the ground. Why?

Researchers in India often lose the focus during their research, according to Jain. Their principal goal becomes getting the paper summarizing the results of their research published in the best journals with highest ranking which can enhance their CVs in order to find a suitable placement in labs in the USA or UK. How these results will take the shape of clinical application takes a backseat.

Furthermore, "Our administrative structures make things more complicated. What keeps funding and state-of-the-art research from reaching the field level is the long chain of bureaucrats right up to the Ministers," says Dr Jain. The Joint Secretary who might have to decide over issues of application of scientific research might not have touched a science book after 10th class. Or in a better scenario, if the civil servant is indeed knowledgeable in these issues, he might be shifted to a totally different department at a very short notice. These are structural and procedural pitfalls which keep the benefits of research and development from reaching their actual targets. This is true not just in the field of science but in general too and typical of many developing countries.

The concerns voiced by the Indian delegation as well as Jain are shared by many in the scientific community of developing nations. Particularly in India, we constantly moan the lack of scientific and sports excellence. Again, it doesn't surprise us that not a single Nobel laureate at the meeting was from India or even Asia. At the heart of this is perhaps the fact that in the context of developing countries, individual excellence is not enough. That is often dented and blunted by lack of promotional avenues, favouritism, non-merit based selections, low incentives and perhaps the burden of an entire slow-moving 'system'.

The problems facing the practice of scientific research and application in India is not the lack of skilled manpower. The greatest concern is a structural one, pertaining to an efficient relationship among various elements  development and exposure of human resources, upkeep and management of facilities, timely dispersal of funds to the intended groups, and finally the fruits of research being applied for the benefit of mankind. After all, that is what Alfred Nobel wanted as well  to award individuals whose work has been of greatest benefit to mankind.