Shunned by law, embraced by cinema

As outrage spreads over the recent Supreme Court ruling upholding criminalisation of same-sex relationships, Shoma A. Chatterji dwells on a documentary portraying the social and emotional ordeal of individuals belonging to the community, and talks to the makers of the film.
25 December 2013 -

The seeds of hate in society that have ghettoized the LGBT community as the "Other" is reinforced by a legal statute, the credit for which lies squarely on the shoulders of Lord Macaulay, who drafted Section 377 of the Indian Penal Code in 1883. For the uninitiated, LGBT expands to Lesbian, Gay, Bisexual and Transgender communities across the world. Much of the legal curbs on them were drawn from the King James Bible where Leviticus warned, "Thou Shalt Not Sleepeth with a Man as Thou Sleepeth with a Woman." The Code reads as follows:

"Whosoever voluntarily has carnal intercourse against the order of nature with any man, woman or animal shall be punished with imprisonment for life or imprisonment of either description for a term which may extend to ten years or liable to fine."

In the recent past, between 20 and 25 homosexuals have committed suicide in West Bengal. All of them were women. But the Supreme Court ruling might now lead to a rise in the number of both men and women ending their lives under the threat of criminalisation and continuing discrimination.

It is believed that the word 'lesbian' comes from the island of Lesbos, where the 6th Century BC Greek poetess Sapphos, who was a devotee of the Goddess Aphrodite, had a school for girls. Much of Sapphos' poetry deals with relationships between women Ð from friendship to love to physical intimacy. It therefore came to be assumed, long after her death, that she had been a homosexual. Thus, the term 'lesbian' which initially meant "an inhabitant of Lesbos" was eventually applied to homosexual women.

Coming back to the present, on 2 July 2009, the Delhi High Court decriminalized sexual relations between consenting adults of the same sex. On 11 December 2013, the Supreme Court annulled or overruled this and recriminalized the LGBT community. Had the Supreme Court upheld the earlier judgment, it would have made legal history but the highest judicial authority of the country refused to redraw the statutes laid down by the British, who, ironically, have ruled out homosexuality as a criminal act in their own country by law. 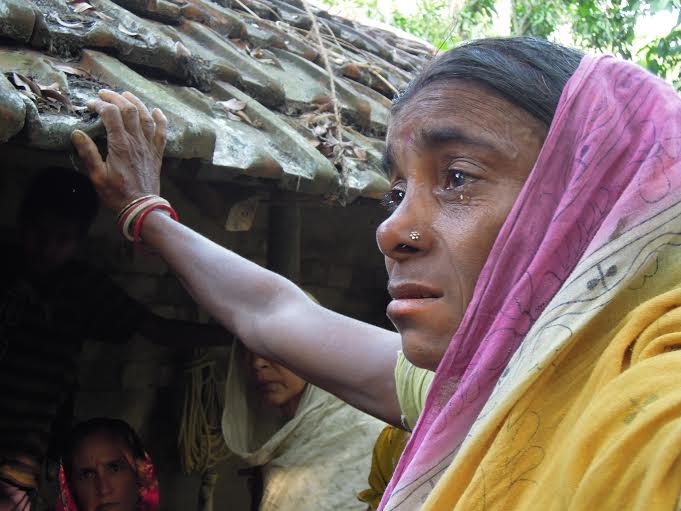 Chandmoni, mother of a young girl who killed herself after being denied a right to unite with her lover. Pic: Debolina Majumder/Sappho for Equality.

Ebong Bewarish (And the Unclaimed) is a documentary that evolves into a scathing indictment of the cruelty, oppression and social ostracism which persons with alternative sexual preferences must face because of that very ideology and mindset that criminalises homosexual behaviour. Directed by Debolina Majumder, it narrates the true story of the joint suicides of Swapna and Sucheta, two young girls who lived in Tekhali village in Nandigram.

One of them left a five-page suicide note revealing their tragic story that forced them to end their lives. When faced with the prospect of Sucheta's marriage to a man who forbids her to see Swapna, the women decide to die in each other's arms. Tragically, their story is not unique though not frequently told. The entire village, including the immediate families of the two girls, refused to perform their last rites and the bodies were left to rot unclaimed in the morgue. This happened in February 2011. Taking a cue from a newspaper report, Sappho for Equality decided to follow up the story and produced the film.

Sappho for Equality is a forum Ð the first of its kind in Eastern India Ð that has emerged as the outcome of a unique effort to bridge the ever-widening gulf between the queer and the non-queer community in India. "Sappho formed a fact-finding team to investigate the story by actually visiting the village where the two ill-fated girls were cremated as 'unclaimed bodies' and this became the core subject of my film," says Debolina. "I used this tragic incident as a peg to explore real-life experiences of others within the LGBT community who speak about their personal stories in my film," she adds. 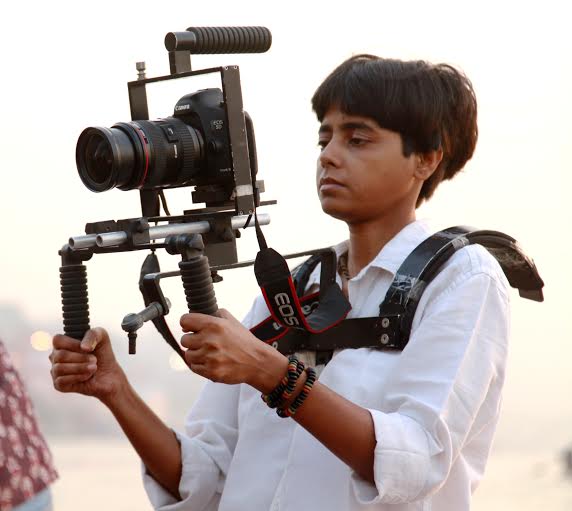 Four people who belong to the LGBT community Ð Sutanuka, Swarup, Banani and Sumita Ð got to read the suicide letter and Debolina used their first person experiences, with their consent of course, to unveil their personal stories and moments of love and hate. Swarup, a married man, is pained by the fact that his wife feels cheated but he is helpless. "We stepped into his home and spoke to his parents, his wife, and tried to portray their problems of accepting what they were conditioned to think was unacceptable. Swarup who is also active within Sappho and part of the fact-finding team was a great help," says Debolina.

Animesh Chakraborty, Sub-Inspector, Tekhali Outpost, informed the fact-finding team on the first trip that the bodies of the girls were still in the morgue. But as Debolina points out, "Our talks with their parents and other neighbours did not give us the slightest clue about the bodies lying in the morgue - so great was the conspiracy of silence."

"The second time we visited the village, we faced tremendous obstacles from the villagers and the locals. We were worried about whether we would be able to finish the film at all. But fortunately, we could. The film is filled with pain and hope, where discarded women discover their voices and declare that they do, indeed, exist," she adds.

Debolina keeps the camera neutral as much as she can considering the sensitivity of the subject and avoids sensationalizing the deaths of the two girls. Swapna's mother Chandmoni Mondol weeps as she talks about her daughter's death but does not mention anything about their bodies being kept in the morgue. The entire village appears scandalized by the tragedy because their mindsets are too deeply rooted in patriarchy, difficult to strip off given their ignorance, illiteracy and lack of education.

It is the pain of not being understood, or rather, being misunderstood and therefore, alienated from their near and dear ones that define the primary tragedies of the subjects in the film. The canvas widens to include other men and women who fall within this so-called "Others" bracket: The grey-haired Sumita who realised her orientation later in life, coped with it and accepted her orientation after some inner struggles. Sutanuka, looking out at the sea on the beaches near Bokkhali, talks about her loneliness while Bonani, looking pensively out of a window, breaks down at certain moments not able to control her emotions.

Debolina has made some more films on same-sex relationships. One of them, More than a Friend explores the lives and outlooks of four characters in the context of growing awareness about same-sex relationships in India. The film is interspersed with real-life interviews of people belonging to various sections of the society. Another film, Katha (Monologues) forms a trilogy of short films based on three true stories: a gay man and his father, two women in love and the everyday plight of a transgender individual. One more, Kee Katha Tahaar Sathe (What words for this person?) is a short film on male homosexual sex workers. It attempts to bring across the hopes, pain, fears and longings of a professional community labelled male sex-workers.

Just as Debolina tries to portray, through the medium of cinema, the emotional and physical realities in spaces inhabited by members of the LGBT community, Sappho for Equality provides a platform to anyone, irrespective of gender or sexual preference, to question the organised manner in which homophobia works and the normalization of heterosexism.

Voices of angst against SC judgment

Taking wings in October 2003, Sappho aspires to become the collective voice of all cross-sections of society who feel the imperative to challenge the heteronormative order that rules our present. The mission of the organization is to address the issues of sexually marginalized women in society and to broaden the struggle for their equal rights, within the nation-state and beyond. "Our vision is a society free of sexuality-based discriminations, where rights of the sexual minorities will be ensured," says Akanksha, a co-founder of Sappho.

Deeply angered by the Supreme Court ruling, she says, "Personally and collectively I must state that this is an anti-humanist verdict that will have dangerous repercussions not only on the lives and relationships of members of the LGBT community but also on only on society at large. When the entire society, economy and culture are racing towards progress, this is one step that is taking us back by 130 years. The HIV+ threat will rise dangerously among the LGBT community and people who are coming out of their closets will again step back, because their behaviour will now be held criminal. They will hide their sexual orientation and make themselves open to the danger of getting affected by HIV+. It is really shocking that these questions were not even considered by the powers-that-be in the Supreme Court before coming up with this ruling. The number of suicides by LGBT people will rise."

Debolina confirms that in the recent past, between 20 and 25 homosexuals have committed suicide in West Bengal. All of them were women. But the Supreme Court ruling might now lead to a rise in the number of both men and women ending their lives under the threat of criminalisation and continuing discrimination.

On the same judgment, Yuri, in his feedback on the Sappho website says, "When the Roman Catholic countries are moving towards a new dawn, when the Pope himself is saying that all are God's own creation and that he loves them all, India is running aimlessly towards darkness. Section 377 was imposed by the British who have now allowed same-sex marriage. Why then, should we allow ourselves to be tortured with a law like this even when India's classic texts inform us about the existence of LGBTs?"

Malabika, an active member of Sappho says, "This ruling does not even deserve to be commented upon. It is a humiliation of the judgement delivered by the High Court in 2009. Every single page of that judgement mentioned the principle of consent between two adult people to enter into a relationship without harming any other person/persons in the process. In my opinion and in the opinion of all those who are angered at this ruling, in any sexual relationship, no one has the right to censure or control or pass comments or stop the relationship. Carnal intercourse is not purely for reproductive reasons. This ruling is an attack and a violation of human rights, and the demeaning of certain human beings just because their preferences are different from others."

The outrage is understandable, given that a consensual homosexual relationship has been reinstated as a crime by the apex court. Indian gays and lesbians, therefore, would now be busier hiding their sexual identities in the 'cupboard' than leading an active and honest sex life. 'Closeted people,' 'underground community', 'people with alternative sexuality' Ð terms casually used to refer to gays and lesbians, have underscored the need to keep same-sex orientation and preferences covert or just push them under our patriarchal, feudal and fascist carpets. This takes away the dignity of choice and therefore, the dignity of living.