The stated claims of India and Pakistan are so far apart that the only possible solution is to freeze existing claims and create a human exclusion zone, says Pavan Nair.
01 August 2004 -

The latest round of Siachen talks have concluded inconclusively with the usual noises being made about continuing the process of dialogue in a frank and friendly atmosphere. Fine, the talks must continue, but for how long? We have been talking on the Siachen issue for the last fifteen years, ever since Rajiv and Benazir were on the verge of an agreement to pull out troops in 1989. This is surely a record of some sort.

I would suggest that the next round be held on the Glacier at a post on the Saltoro Ridge at twenty thousand feet. This, to give diplomats and even the generals a feel of the place. Visiting base camp or even the advance base at Kumar on the Glacier is not enough. Try spending a night at twenty thousand without oxygen. One does not have to be a mountaineer to realize that there is a human problem here. Soldiers from both sides have been deployed for twenty years at heights where basic survival is under constant threat. The human body is not designed to function at such altitudes. The toll in terms of killed and wounded on both sides is reaching the ten thousand mark and continues to rise inspite of a cease fire being in place. More than 90% of these casualties have been caused by the extreme climate and the lack of oxygen. Several hundreds have been buried in avalanches and crevasses, their bodies never recovered. 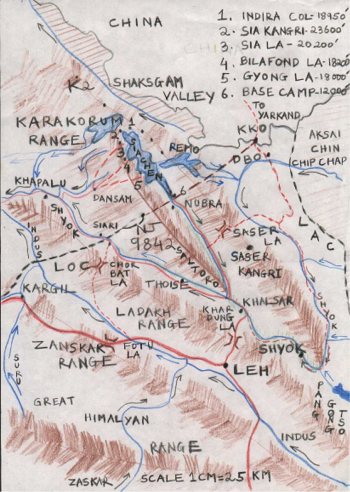 But then soldiers are expendable. How can we not defend every inch of our motherland? Never mind that the Chinese have occupied many thousands of square kilometres of our sacred territory next door in Aksai Chin which incidentally also formed a part of Jammu and Kashmir when it was ceded to India by Hari Singh. We have accepted this occupation (shown in shaded lines on the map) without sacrificing a single soldier. In Siachen we now need to look at the cost benefit ratio in human terms.

If we are serious about resolving issues between India and Pakistan, then there is no better place than Siachen. No populations are involved. Neither side has anything to gain in this arid glaciated terrain. Senior military officers past and present have said that there is no tactical or strategic purpose being served by retaining our positions on the Saltoro Ridge. The same job can be done at a tenth of the cost by creating reserves in the Nubra and Shyok Valleys. India and Pakistan spend a million dollars a day in Siachen. Even if we accept the casualties to our troops, is this level of expenditure justified? A thousand crore rupees a year is not chickenfeed for a country which is way down in the human index. (1 cr = 10 millions)

The core of the dispute lies in the interpretation of a phrase of the Karachi Agreement which was signed under UN auspices in 1949. The last bit of the Cease Fire Line in Ladakh was not demarcated as the terrain was too difficult to negotiate and military operations were not considered feasible. The Agreement states that from the last demarcated point Khor (NJ9842 on the Map), the line would run thence North to the glaciers. The Pakistani stand is untenable and is based on published maps and atlases which erroneously show the line running in a North Easterly direction from NJ9842 to the Karakorum Pass (KKO on Map). The Indian stand is that the line should follow the ridgeline of the Saltoro Range which actually runs in a North Westerly direction. This is based on the universally applicable watershed principle. This however should have been mentioned in the agreement.

Even if that be so, the unilateral occupation of the ridgeline by our troops in April 1984 was not legally tenable as passes on the ridgeline and the ridgeline itself are jointly owned. After all, if we are sitting on a line which we claim as ours, so can the other party. The Karachi agreement clearly states that in case of common or joint ownership, troops will remain five hundred yards from the line. This has not been observed by either party.

A similar situation was encountered in Antarctica where several countries had overlapping claims. The claims still exist but have been frozen under the Antarctic Treaty. The entire area has been declared a science park and is monitored by observers.

The stated claims of the countries are so far apart that the only possible solution is to freeze existing claims and create a human exclusion zone. A similar situation was encountered in Antarctica where several countries had overlapping claims. The claims still exist but have been frozen under the Antarctic Treaty and the entire area has been declared a science park and is monitored by observers who ensure that member countries are not violating environmental norms. As far as the ecosystem of Siachen is concerned, the glacier holds the largest reserves of fresh water in South Asia and feeds the Indus via the Nubra and Shyok Rivers.

It is estimated that 200 thousand tons of garbage, human waste and military junk are lying preserved in the region. The calculation is simple. A single soldier creates one ton of garbage a year. Hundreds of thousands of shells have been fired. Large amounts of kerosene have leaked into the glacier. It will take several years of concerted effort to nurture the ecosystem back to health provided we withdraw from the area now. We need to create public opinion which will influence the ruling elites of both countries. We need to act now.

It is evident that left to the parties, nothing but further rounds of talks will happen and that too in due course of time. Should the people of both countries get more involved in this issue or should we let it lie under the carpet? It seems that all interested parties are happy with the status quo -- governments, military establishments, suppliers of special equipment and strategists on both sides. So the noises about the peace process will continue. In the meantime, soldiers will lose more fingers and toes or just drop dead. The glacier will continue to recede, we will continue to waste our limited resources, play cricket and have more rounds of talks.

We have a model in the Indus Water Treaty which was negotiated under the auspices of the World Bank. Even during the wars fought between the countries, the terms of the treaty were respected by both parties. It is now time that the Siachen dialogue be facilitated by a third party. India is averse to this, however it is suggested that the United Nations should take this role. After all, the Karachi Agreement which is at the core of the dispute was signed under UN auspices and lies in a safe vault in New York. This could be the only way out since any prudent observer will agree that that the Simla Agreement was violated when we occupied Siachen in the first place.

There is another option. India can withdraw unilaterally. Like the Chinese did in '62, after establishing their military superiority. We would have made our point and can declare that any subsequent violation of the line by Pakistan will be considered hostile. But this requires political will.

Pavan Nair is a retired army officer who served in Bangladesh, Sri Lanka, Kashmir and Antarctica. He works with the Pune-based NGO, Jagruti, on issues of women and child development.

BACK TO SCHOOL : Meaningful restart of education is critical
MORE ARTICLES
on similar topics ...
J & K