Ashwin Mahesh shows how some states wield more power in Parliament than they would if statewise seat shares were fixed on the basis of population alone.
01 October 2004 -

In the original constitution of India, it was provided that after the publication of each census, the number of seats allotted to each state in the Lok Sabha would be revised to make sure that the ratio of each state's allotment to its population would be similar. This method of adjusting seats in the Lok Sabha, was however, abandoned by altering the relevant Articles (81 and 82) through the 42nd Amendment Act to the Constitution, which fixed the 1971 Census as the relevant one for such calculations (the 30-year life of the amendment was extended further by the 84th Amendment Act in 2002, until the year 2026).

With these amendments, there has been a growing divergence between population and the representation of citizens in Parliament. While population has grown in every state since then, it has growly far more slowly in some states. As a result, the latter's representatives have gained in voting power steadily. 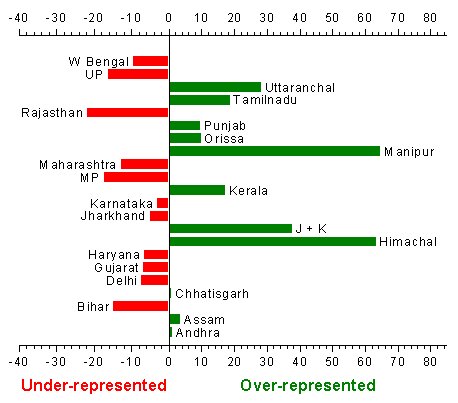 This graph shows how much more power states wield in Parliament than they would if seats were fixed on the basis of population alone.

Method: For every state, using the 2001 Census, the fraction of the nation's population that is resident in that state is first computed. For e.g., for Gujarat's 50.6 million people make up 4.93 percent of the national population (note: Census data from 2001 are likely to be different from today's figures, but not substantially). Then, using the number of seats for each state in both the Lok Sabha and the Rajya Sabha, as well as the total number of seats in each House, the fraction of seats held by the state is also calculated, and the mismatch of this fraction to the earlier one is determined. Gujarat, for example, has 4.77 percent (26 out of 545) of the Lok Sabha seats and 4.40 percent (11 out of 250) of the Rajya Sabha seats. On average, therefore, the state has nearly 7% less voting power in the two houses that it should have for its population.

The largest over-influence is from states with small populations, such as Himachal and Manipur. But these states (plus a few others not shown (Goa, Nagaland, Meghalaya) have only a small allotment in Parliament to begin with; so even a big skew in their cases is not significant. What really matters is the distribution of voting power among the larger states. It should also be noted here that not all of the skewed representation is from the 42nd Amendment alone. Some states have always had a higher-than-expected (and others have had lower, as a result) allotment of seats in the Rajya Sabha, dating back to the origins of that body.

The most significant gainer has been Tamilnadu, which holds nearly a 20% advantage in both the Rajya Sabha and the Lok Sabha.  •  Interact: One person, one vote?

Kerala and Tamilnadu, the two southern states whose population programs have been the most heralded, are clearly to the plus side. The two others, Andhra and Karnakata, are close to the center-point. They are neither significantly over-represented nor under-represented in Parliament.

On the other hand, states with huge populations or growth rates (Maharashtra's population has grown greatly since independence, but a significant share of this is probably from inward migration, rather than high fertility rates) are at a significant disadvantage. UP, Bihar, Bengal, Maharashtra, Rajasthan, and MP - which together have nearly half the national population, are all at a 10% or worse disadvantage when it comes to voting power in Parliament.

The most significant gainer has been Tamilnadu, which holds nearly a 20% advantage in both the Rajya Sabha and the Lok Sabha. In recent decades, it has been noted that MPs from regional parties from Tamilnadu often hold very high Cabinet positions, regardless of the coalition that is formed at the Centre. Some of that is due to the way coalition government in India has evolved, with regionalism in some states and not in others. But some of this is also the result of simply being genuinely different from other states with large populations. By being signigicantly ahead of other large states in its population initiatives, Tamilnadu has, thanks to the Constitutional amendments, obtained a share of power in New Delhi larger than what would have, had its share been derived from the state's proportion of the national population. Tamilnadu has also been helped by having had a generous allotment in the Rajya Sabha at the same time.