An initiative at an educational institution near Mangalore ensures that the institution can do without water tankers during the monsoon months. Rainwater suffices and what's more, its borewell also gets recharged. Shree Padre reports.
26 March 2008 -

With its capacity of 75,000 litres, Somarpanns roof water harvesting tank at Deralakatte near Mangalore must be one of the biggest in coastal Karnataka. In a farsighted move, Somarpann  the head office of the Christian Education Institution that runs 65 rural schools across the country - had built this tank during the building construction itself two years ago, as a backup. As a result, Somarpann has been able to shed its borewell dependency and is equipped to meet all of its water demands.

With an average rainfall of 3,500 mms, this district gets 1.4 crore litres - highest in the state - on an acre. Yet, there is acute water shortage in some areas. Tanker water has to be provided incurring lot of expenditure. Manjanady Panchayath, just five kilometres away, though a village, has to be supplied with tanker water since February. 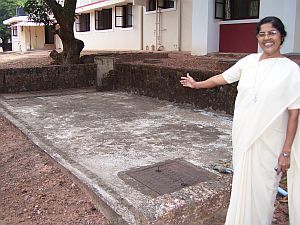 Before constructing the building, the sisters at Somarpann had consulted a few water diviners. All of them had ruled out the existence of adequate quantity of groundwater here. Finally, one diviner showed a point. Even after digging 400 feet, the borewell dug there didnt yield water. The institution incurred a loss of Rs.30,000 in this exercise. As a last bid, one of the sisters of the institution identified another point. Luckily, the borewell yielded water this time. But the anxiety remained. For how long would this water be adequate?

At this stage, Sister Jeraldine, one of the councilors of the institution came up with a suggestion. We have a huge roof. Why cant we store the roof water in a tank? Sister Doreen DSouza, Superior General - chief of the institution, liked the idea.

The result was that they incorporated building a concrete tank and the necessary systems to harvest roof water into the blueprint of the building. This concrete storage tank is underground, at the rear side of the building, very near to the borewell. All the exit pipes from the roof are interconnected. The run-off from the terrace is directed behind the building and is lowered into the tank through a down pipe. The water passes through two filter tanks located inside the concrete tank - first one with sand and the next with charcoal. The clean roof water gets stored in the underground concrete tank. The overflow goes to the borewell where systematic arrangement has been done to sink that water.

In roof water harvesting, rainwater is collected from a clean catchment (roof, in this case) and thoroughly filtered to separate any floating bodies or external materials and is finally stored in a closed tank.

The tank is kept closed to prevent the growth of algae that grow in an open tank onto which sunrays fall.

•  A 'Gurukula' for surangas
•  College saves lakhs of rupees

From the underground tank, water is lifted to the overhead tank that has 25,000 litres capacity. The borewell water also runs into this tank. During the four monsoon months, Somarpann uses mostly rainwater for drinking, cooking and other purposes. As a precaution, they boil the water before drinking. The tank has to be filled twice every week. The borewell gets a holiday during monsoons, except for the occasional running of the submersible pump to avoid rusting. Since the RWH arrangement was done during the construction stage itself, the sisters of the institution have not kept separate financial account of the same.

Two summers have passed. According to Sister Jeraldine, based on their water use pattern, the 75,000 litres tank has provided them nine lakh litres each year. We are prepared even if the worst comes, she says. Sister Jeraldine had earlier lived in Mizoram and Nagaland for 25 years. That taught her the importance of roof water harvesting. In the north-east, rain was our only hope. Throughout the year, we used the rainwater stored in huge tanks. We had to be very careful while using water. If stored water got exhausted, one had to climb down about a kilometre in the valley and carry the water up. Tap water is very rare, she recalls. Wherever water flows from a tap, people seldom realise its importance, she points out.

Somarpanns farsightedness can be a model to other big institutions, industries and factories situated in heavy rainfall area. If they can make a one time investment and create some reasonably good storage place in the form of underground tank, it can be a big asset. By storing the roof water, they can do without the borewells for at least four to five months a year. This move, apart from considerably saving the electricity bills, would extend the life of the borewells. Overflow from the tank can recharge the borewells as has been done in Somarpann, further enhancing the dependability of the borewell. This backup for the borewell is quite reliable due to the assured rains. 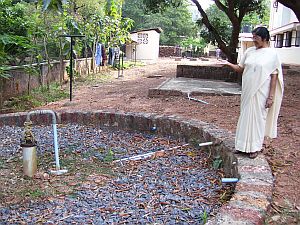 Overflow from the tank recharges the borewell. Pic: Shree Padre.

In another instance, a farmers family near Puttur has shown that even a middle-class household can live at least four to five months on rainwater.

K M Thirumaleshwara Bhat of Idkidu has a 13,000-litres open tank near his house. When his hamlet started a movement to harvest rainwater five years ago, he had a brainwave. Why not use the rainwater itself throughout monsoon, he thought. He directed the filtered roof water straight into the tank. Once full, then the excess water flows to their well. We dont run our motor during monsoon at all, says his wife Shailaja. The tank water lasts us two weeks for all domestic and allied uses. Only if it doesnt rain for a fortnight, we are compelled to lift the groundwater. Last half a decades experience has proved that we can live at least five months a year on rainwater. If only our tank was bigger, we could have managed for six months as well.

In fast growing Mangalore, in some areas, borewells have been dug to a depth of 850 feet. It is high time the Mangalore municipality and the citizens understand and utilise the potential and reliability of rain and create an effective backup to meet their water demands.