Shunyota, a feature film in Bengali, has an all-India resonance that will echo across the country if and when it’s subtitled version will be screened, writes Shoma Chatterji.
08 May 2017 -

Directed by Suvendu Ghosh and based on three different short stories written by Anirban Roychowdhury, the film Shunyota (2017) explores the impact of demonetization on the common man, captured through a microcosm of men and women from different walks of life, financial base, education, ethnic background and so on. It is produced under the banner of UR films by Uday Singh who is into real estate business but came forward to help his friend make this socially significant film.

It is sad to discover that just on the eve of its release in March, the Central Board of Film Certification (CBFC) stopped the release of the film asking the director to delete some ‘sensitive’ dialogues from the film. In a letter to the movie director Suvendu Ghosh on Friday, March 31, the Kolkata regional office of CBFC asked him to communicate within 15 days his "acceptance or otherwise" of the recommended cuts. The missive said, the cuts were decided as per the directives of the CBFC chairperson and recommendations of the examination committee.

The recommended cuts included deletion of two sequences and muting of four sentences/parts of sentences/words with beeps. One of the recommended deletions was a ten seconds sequence that clearly articulates, ‘A large number of unacceptable death processions in the country revolving around demonetisation’.

“I was also asked to mute a part of a sentence with a beep that says ‘the government has committed the wrong, and while the big fish will survive, the small fish will be trapped’. Earlier, the Kolkata Regional Office of the CBFC had referred the film to the board's Chairman Pahlaj Nihalani for a decision on certification citing differences of opinion among members of the (examining) committee,” says Ghosh.

Why did he not fight the decision of the CBFC to hold back the film?

“We are small people, not some big Bollywood banners that can afford to go to court and have a team of lawyers on their payroll. Where is the money? We managed to put the film together at a meagre Rs 35 lakhs with hardly anything left for marketing and promotion. Besides, had I dragged through a court case or even gone to the tribunal for a review, it would have taken time. Delay would have defeated the very purpose of the film. It is time-bound to demonetization. The more you are distanced from the subject, the lesser impact it will have on the audience,” informs Ghosh. He added that his friend who stepped in to produce the film would have been burdened under legal costs they cannot afford.

Ghosh need not have worried, He held a press conference after CBFC’s sudden decision to discuss the issue with the media. “The media responded so quickly and so well that finally, we agreed to make six dialogue cuts and the film was released across a few theatres in Kolkata on April 21,” says Ghosh, adding that the team sat down and discussed the deletions. “We found that if we agreed to the cuts they asked us to make, it would not have any serious impact on the film or in its message. But this release also would not have been possible unless the entire media – print, television, online, had risen to the occasion to support us wholeheartedly and strongly. Shunyota is devoid of any political colour. I think the subject of the film - demonetization was the real reason why they could not take a decision… They probably did not view short films as a threat. But a feature film with a commercial release is a different scenario.” Finally, Ghosh agreed to the six cuts but “the delay in the release of the film by around one month has been extremely painful for me as director,” he sums up.

Shunyota is a neat film, with minimum melodrama and no sensationalisation with reasonably impressive performances comprised of a cast devoid of stars with a nice blend of veteran actors and total newcomers. It is by no means a great film but it is a good film that everyone needs to watch not just to see how demonetization has impacted the lives of ordinary men and women but also to see how a good director can turn it into the core subject of an entire feature film. There is no physical violence because demonetization is itself a form of violence perpetuated on the common man who becomes its victim.

Ghosh has anchored the film to a writer who, while addressing a press conference, narrates each story as the camera moves back to capture that story. This is a move that could have been avoided but has perhaps been done by design and order to function as the dividing line between and among the stories.

The first story is about Lakshmi (Soma Chakraborty) and her teenage daughter Basi. Lakshmi works as daily labour in a coal field in Raniganj. She is forced to sell of the small plot of land she owns to pay for the dowry for her daughter’s marriage much before the marriage happens. On the very night she pays out the money to Basi’s would-be father-in-law, the currency notes are reduced to bits of paper because demonetization has been announced. The boy’s father breaks the marriage immediately and labels the girl unlucky. A broken-hearted and angry Lakshmi is advised to rush to the nearest bank branch to get the currency notes changed. She rushes back with the happy news only to find that it is too late. 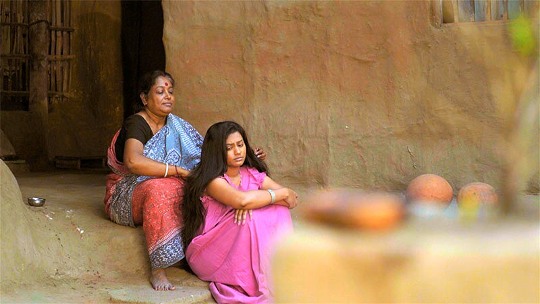 A still from the film. Pic: Shoma Chatterji

In the second story, a young Bengali couple based in Sikkim arrive in Kolkata for the treatment of their two-and-a-half-year old son, who is suffering from a very rare heart disease called ventricular septal defect. That very night, demonetization happens and the hospital refuses to accept the old currency notes. So, the husband asks his wife to wait till he comes back from Howrah with the cash needed from a contact as the little boy is taken to the operation theatre for an emergency surgery. But something drastic happens in all this haste and the end is disastrous.

The third story is the most powerful one. Set against the backdrop of Kakdwip, it tells the story of a very affluent man who makes money out of his business in repairing and building fishing trawlers. But he is a pathological miser who keeps his workers waiting for their wages, and his wife and daughter in extremely poor situations. They eat vegetarian food because he will not spend on fish. They live almost without electricity and the man refuses to get the only television set repaired. His wife and daughter break their backs working the day long.  At night, he opens the locked door of his room where his wife and daughter are not allowed. The huge trunk under his bed is filled with currency notes of all denominations. He kisses them and throws them high up in the air and collects them back because he is obsessed with cash. What happens to him, his family and that huge cache of currency notes makes for a powerful yet credible climax. 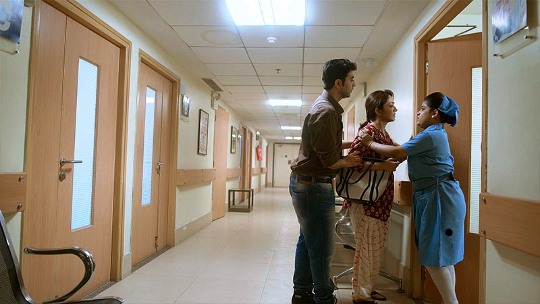 A still from the film. Pic: Shoma Chatterji

The music composed by Pinaki Ghosh matches the sombre and serious mood of the stories very well. The composer has made aesthetic use of folk instruments from Bengal such as dhana, maadol, khanjani, ektara, the bangla shehnai and so on which are almost fading from the world of music in Bengal. Samar Haldar’s art direction has woven in a good blend of aesthetics and authenticity while Gautam Nag’s sound design is apt. The acting honours should squarely go to Debesh Roy Chowdhury who plays the pathological miser, followed by Soma Chakraborty as Laksmi, the woman who works in the coal fields. The others offer solid support never mind if they are newcomers.

“I was strongly motivated to make a feature film on demonetization because my last film Chetana (Consciousness, 2016) that tackled the value system released in August last year, won the Best Director and Best Story Award at the Dubai International Film Festival. Demonetization happened in November, soon after we came back from Dubai in August. The time was ripe, I felt as a socially conscious director, to make a film around demonetization. Among some of the important decisions I took while casting for my film were not to take any stars because I felt that the glamour the star brings to a film would work against the seriousness of the subject and the audience would perceive it differently. At the same time, I needed actors who really knew their job so I worked out a fine harmony of pitting experienced veterans against total newcomers,” explains Ghosh.

One hopes that the subtitled versions of the film will soon be open to pan-Indian audience if Ghosh’s wish of getting invited to at least some of the 65 international film festivals across the world is to be met with success.