Interlinking rivers to redistribute the water and constructing big dams are being projected as key solutions to the severe water crises in several parts of India. The financial as well as the human and environmental costs of mega projects are fairly high; these are justified by the Government in the name of development. But the answers to the water crisis are often found embedded within ideas that local communities generate to address problems on their own. Communities like Mithivirdi.

Mithivirdi is a traditional coastal village on the Gulf of Khambat, named after the numerous fresh water holes called virdas that have been the source of clean drinking water for many years. Until 50 years ago, such fresh water columns covered the entire region and even existed in the middle of the sea. But over a period of time, pollutants from the sea and the ports have destroyed these virdas, leading to severe water scarcity in the region.

The non-governmental organization Utthan, under the leadership of Nafisaben Barot, [click here to read our interview with Nafisaben] has been assisting the local people to craft new techniques to address the water crisis in several villages in the Bhal region of Ahmedabad and Bhavnagar districts. In Mithivirdi, there have been two approaches adopted by the community to harness rain water, namely (a) using rainwater to regenerate and maintain the local water resources for the entire community; and (b) collecting rainwater through innovative collection storage schemes for individual households.

Picture: Water accumulation by the check dam in Mithivirdi village, before and after the rains.

The villagers completed the construction of a check dam on the Chaya river flowing through Mithivirdi; this had been initiated by a government scheme and left incomplete. Check dams, key to water harvesting in these villages, serve two purposes - they help re-charge the water table by slowing down the drainage of water and hence allowing it more time to seep into the ground. They also prevent the saline sea water from flowing back into the land and destroying crops, which happens at high tide and especially when the land is dry. Typically these dams are small, about 2 meters tall and 8 meters wide; just two hours of rainfall can help store a substantial body of water within these dams. 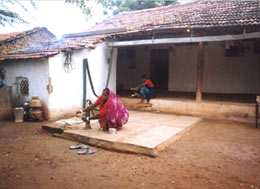 Picture: Rooftop rainwater harvesting collects water from the monsoon months and makes it available for use after the rains stop.

Innovative techniques to collect rainwater at the household level are another aspect of efficient water management. Houses are provided with a gutter pipe, and a tank to store the water in. The capacity of the typical tank is about 10,000 litres, and costs about Rs. 15,000 to build. The tank fills up in about four hours of rainfall. During the monsoon months, the water from the tank is typically not used, it is instead stored for use during the difficult months leading up to the next monsoon. Syntex tanks or even pots and utensils in the house serve the purpose of water storage directly from the gutter pipe during these months.

Successful rainwater harvesting in Mithivirdi has had a major impact on a completely different area of development - it has brought about gender equity! Since the women no longer need to walk to long distances to fetch water, they make good use of their time at small entrepreneurial activities. Some women run businesses, including diamond cutting factories where both men and women in the villages have been employed.

Innovative ideas in successful water harvesting have cropped up from within local communities who face the hardships of water shortage. Time and again, works of organizations like Utthan emphasize the importance of understanding natural resource management in the context of the topography of a region, the lifestyle of the people and the existing local knowledge. Overall improvement in the financial status of the people, women's empowerment and improvement in the quality of life of the people are additional consequences that are truly 'linked' to it.

This article is based on a visit to the areas served by Utthan by Nigamanth Sridhar, a student of Computer Science at Ohio State University, and a volunteer for the Association for India's Development. Vaijayanti Gupta also volunteers with AID, and is a researcher with the National Institutes of Health in Washington DC.