The country's latest Geographical Indication certificate offers some new hope - of putting the sheen and colour back in a vital piece of Indian heritage, and livelihoods linked to it. Puja Awasthi reports.
01 November 2009 -

On September 4, a small piece of paper spread a shield over some 12 lakh weavers. Though not all of them know of it yet, the newest Geographical Indication (GI) certificate from India declares that henceforth only saris produced in Varanasi, Azamgarh, Chandauli, Jaunpur, Mirzapur and Sant Ravi Dass Nagar (Bhadohi) will be considered Benarsi saris. The certificate covers silk brocades like Amru, textile goods not covered elsewhere such as bed and table covers, silk saris and dress materials such as Jamdani, Jangla, Jamawar Tanchoi, Tissue, cut work, butidar and silk embroidery saris.

A GI certificate, which is granted by the Centre under the Geographical Indication of Goods (Registration and Protection) Act, 1999, is both a guarantee and protection. It guarantees that the product under consideration was produced in a specific geographical region or locality from where it draws its special characteristics. It assures the buyer that his money has been spent on a genuine good while it protects the producer against cheap imitations (in this case computer-printed saris from Surat and saris on Chinese crepe) trying to pass off as genuine artifacts.

The miseries of Varanasi's silk sari weavers have been documented since 1995, when the government imposed a ban on weaving of Chinese silk - forcing weavers to buy the more expensive Bangalore silk instead. However in 2001, under WTO negotiations on import tariffs on textiles such as saris, the government removed quantitative restrictions on silk imports, thus flooding the market with plain Chinese crepe fabric which began to eat into the Benarsi silk sari market because of its low cost. With the economic downturn export orders began to decline as well, further ruining the market.

In addition, 80 per cent of the market was captured by power loom owners spawning cheap computer-assisted designs on saris produced much quickly than the handloom product, and selling them at less than half the price of a real Benarsi sari. However, the power loom itself is not the villain of this piece. According to figures from the Ministry of Textiles, these looms employ close to 48.6 lakh workers, manufacture 62 per cent of the cloth produced in the country. In striking contrast the number of handlooms has remained static at 38.91 lakhs during the same period. 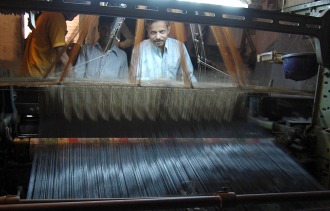 Power looms spawn cheap computer-assisted designs on saris produced much quickly than the handloom product, and at less than half the price of a real Benarsi sari. (Picture: Shamsudin Ansari was one of those who gave in to the lure of the power loom. (Photo by Kamal Kishor Kamal).)

Social activist and writer Bharat Dogra points out that the problems are long-standing. As he observes, "The crisis of Varanasi's silk weavers is deep-rooted. Why should a highly skilled community face such acute difficulties? The government, despite its pre-independence commitment to the handloom sector, has been able to put policies on paper only. The media too has looked at the issue only at a very superficial level."

Dogra's view is well supported by the facts. India's handloom sector is the biggest in the world and employs 65 lakh workers directly or indirectly. According to the Report of the Working Group on Textiles and Jute Industry For the Eleventh Five Year Plan (2007-12) it contributes about 15 per cent of the country's cloth production, and brings in hundreds of millions of dollars in export earnings annually. This low-capital-intensive industry has no import content in assets/raw materials and presents a vast array of environmentally friendly products. In addition, as the report suggests, it has the "potential to arrest migration of population to urban areas", a growing concern in recent years.

In 2001, such considerations prompted "Find Your Feet" (FYF), the Indian arm of a UK-based charity to make the first efforts to assist weavers, primarily by setting up self-help groups that allowed them to work without middlemen in the economic chain. The most important step was the building of the Benares Bunkar Samiti (BBS), an aggregate of 97 self-help groups of weavers and artisans, with 1296 members spread across two blocks (of Chiraigaon, 49 villages and Cholapur, 13 villages).

As on September 30, 2009, the total savings of the SHGs members was Rs.18,38,155, total grant of Revolving Fund from FYF was Rs.4,94,845, total interest earned from members was Rs. 158232 taking the total Group Fund to Rs.24,91,232 while the percentage of group loan recovery stood at a handsome 72 per cent. In April 2005, after the pilot had been successful, DFID stepped in to support FYF to fund the project with 245,399 British Pounds for five years, money which will now help in expanding the project to the neighbouring districts of Mau and Ghazipur.

"The weavers had faced the worst of the crisis. Our first concern was only to have a revolving fund grow so that immediate livelihood issues could be tackled but one of our board members brought in the GI idea", says Savitri Sharma, director of FYF, India.

By 2004-5, with a lot of capacity building and training inputs from Saksham India Trust (SIT, the development resource cell of FYF), the BBS was ready to apply for the GI. BBS in fact became the first applicant for the GI.

In addition to the Indian government's own commitment to protecting Intellectual Property rights, the case for GI status for brocade and Benarsi saris received a boost from Supachai Panitchpakdi, Secretary General of the United Nation Conference Of Trade And Development (UNCTAD). During a visit to Varanasi in August 2008, he declared: "We would like to support the effort to have a formal geographical indication, of course, at national level. There would be a subsequent international recognition of this product of 'Banarsi silk sarees' and brocades and other products that should be gaining in terms of more value outside India as well." (The Economic Times, 19 August 2008)

More than a decade of struggle

But long before that help came, many weavers had given up hope. Shamsudin Ansari (36) of Lohta (a small town 22 kilometers from Varanasi, and a dense hub of weavers) was one of the many who gave in to the lure of the power loom when the market for the handloom product began to shrink. For 20 years he had worked on the handloom but when it became impossible to feed a family of 14 he pawned off the jewellery of the womenfolk to buy a power loom, hoisting his five handlooms at one end of his tiny workspace. The womenfolk, who do the pre weaving tasks like degumming, bleaching, and dyeing work within the home.

"The computer-designed saris from Surat destroyed us. Then came the Chinese product which used nylon threads instead of silk. On the handloom weaving was a work of art, and an exquisite product sometimes taking two months to be completed. Now I work on the power loom which unlike its counterpart can weave only in three colours at one go. And then there is this awful noise to contend with", he shrugs. To beat the power outages and the voltage fluctuations that the area is plagued with, work on Ansari's obsolete shuttle loom continues 24 hours a day, his brother and cousin putting in eight hours like him.

Like most weavers in the area Ansari has no knowledge of the GI, and its newly-available protection against competition from imitators.

Abdul Kalam (40) also of Lohta, is another of the ignorant. The youngest of his four children, one-year-old Roshni is severely malnourished. But since the doctor at the government hospital never told Kalam what exactly is wrong with the child, he describes only the symptoms. "For two months after she was born, the girl was alright. Then she developed cough and cold, her body was covered in boils and her belly began to stick out. I do not think the government doctor has been able to diagnose what is wrong. Someone suggested a private doctor, but he charges Rs.150. I earn just less than half of that", he says holding up the folic acid syrup that the government doctor has given him.

Hunger, depression and death have been common themes among Varanasi's weaving community. According to a study by the Varanasi based People's Vigilance Committee on Human Rights (PVCHR), between January 2003 and March 2007, 47 weavers committed suicide mostly due to malnutrition, inability to pay loans, and hunger. During the same period, 46 children were found malnourished. Similarly between March and August 2008, 67 patients were diagnosed with tuberculosis (caused by breathing in fibres and fabrics they work with). Many moved to petty trades like plying rickshaws, some migrated to Surat and Ludhiana, and in the worst cases, out-of-work weavers began to sell their blood and even their children to tide over the crisis.

Need to link to markets

The GI certificate may bring some relief, but the few who do know of it are realising a few other truths too. Bachcha Lal Maurya of Chhahi village, some 23 kilometres from Varanasi on the road to Sarnath, regrets that weavers like him have no links to the markets. "For nine years we suffered, surviving on as little as Rs 50.a day. We need to make sure that never happens again. Why are we involved only in production? Why don't we exhibit our work to the outside world? Why should a middleman be our only source of orders? Why should we continue to produce just traditional saris?" he asks.

Hira Lal (49) a second-generation weaver who shares work on Maurya's four handlooms says that he once had six looms of his own and employed 10 weavers. Today they lie dusty and cob-webbed, not even fit to be sold. "There came a time when I wanted to poison my family and myself to escape the poverty. In our village two weavers did just that, but I worked on construction sites and as an agricultural labourer to survive. The [GI] certification has meaning only if we are connected directly to the markets", he says. 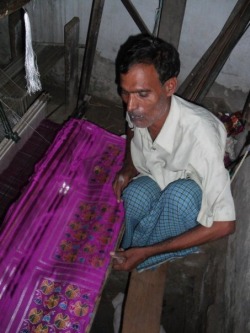 Pic: Diversification to products such as table mats will help the industry.

FYF's Sharma says, "This is just the beginning; we have a long away to go in bringing the Benarsi sari and brocade more in line with today's fashions. That includes an expansion of our product range and design modifications in alliance with national level design institutes and building market linkages. The trade has to be made viable also to draw back those traditional weavers and their children who have been weaned off the craft."

Those things will take time. For now, at least the GI certificate offers some new hope - of putting the sheen and colour back in a vital piece of Indian heritage. At Maurya's own loom, a weaver is working on table mats. On a background of shocking pink silk he plaits flowers in a riot of colours. The table runner to go with it has already been produced.