While there is certainly a difference in the methods by which waste is disposed of in the global North and South, there are new European technologies in this field which deserve to be looked at, albeit at some future date. Darryl D'Monte reports from a recent event in Naples.
30 November 2013 -

Anyone who studies the disposal of waste in Indian cities can easily be forgiven for imagining that it is virtually impossible to tackle. Mumbai is a typical case in point. To begin with, no one even knows exactly how much is collected. As businessmen say, if you can't measure it, you can't manage it. In January, the Indira Gandhi Institute of Development Research in the city estimated that Mumbai generates 15,050 tonnes of solid waste per day, of which 4,110 tonnes comprise construction and demolition debris. The municipal corporation, however, states that the city produces 6,500 tonnes, plus another 2,500 tonnes of debris.

As Maharashtra officials pointed out at a recent [November 18-19] meet on "Mumbai as a Mega-city", organised by the corporate think-tank, Mumbai First and the state government with the European Union (EU), the city is running out of landfill sites. No one wants to live cheek by jowl with such sites, and given the astronomical prices of the city's real estate, it isn't easy to identify new locations. Mumbai's geography doesn't help: being a peninsula, hemmed in by the sea, its transport axis runs from north to south, so the city has to go further and further to dump garbage. Under the Coastal Regulation Zone rules, it is not permissible to dispose of garbage on wetlands.

Of course, the content of garbage in Indian cities differs from that in developed countries. There is much more organic or kitchen waste, since the amount of combustible packaging, including plastic, is much less. What is more, European cities don't have rag pickers, who sort garbage before it is delivered to a dump site, if not at the site itself. Delhi is said to have as many as 350,000 waste-pickers, whose lives were recently depicted in a photo exhibition in Jawaharlal Nehru University.

According to the World Bank, between 1 and 2 per cent of the world's population pick waste. In Mumbai, it is the first choice for the most recent migrants: however abhorrent the working conditions, it helps a person to eke out a livelihood. In the capital, the advocacy group Chintan estimates that the informal sector picks around 15-20 per cent of the city's garbage, estimated at 8,500 tonnes a day. Kaveri Gill has detailed the social and economic aspects of this trade in her book titled Of Poverty and Plastics: Scavenging and Scrap Trading Entrepreneurs in India's Urban Informal Economy. It is mostly the lowest castes and minorities who perform these most menial of jobs.

In Mumbai, groups like the Stree Mukti Sanghatana have mobilized women ragpickers from across Maharashtra and encouraged them to improve their lives and working conditions. As Jyoti Mhapsekar, President of the organisation, notes, a survey found that most of the women were Dalits, deserted or abused by their husbands, with no one to fall back on. It is from this most marginalized section of society that the organisation was born; some now earn Rs. 2000 a month by collecting dry waste from housing societies and the Santacruz Electronics Export Processing Zone (SEEPZ), while the wet waste is fed to several biogas plants across the city.

When will new technologies make environmental and economic sense in Indian cities? This is an open-ended question but it is likely to be sooner than later.

The waste processing industry faces new challenges, now that the Jawaharlal Nehru Urban Renewal Mission encourages the collection of waste to be privatized. Thus Delhi has been subcontracting big private firms to collect waste, on the grounds that they are more efficient. It has been trying to convert this trash into electricity, despite failures in the past. Four such incinerators have been established under the UN Climate Convention's Clean Development Mechanism. These receive climate subsidies and carbon credits because they capture methane which would otherwise be released into the atmosphere as organic waste decomposes in a landfill. Methane has a much longer life, and is thus far more harmful to the climate, than carbon dioxide.

While there is certainly a difference in the methods by which waste is disposed of in the global North and South, there are new European technologies in this field which deserve to be looked at, albeit at some future date. At the annual meet of international environmental journalists called by Greenaccord earlier this month in Naples [Nov 6-9], participants toured the Erreplast factory which is a major manufacturer of recycled PET flakes. It can recover 2,500 kg of plastic per hour from PET containers. The recycled PET is a new raw material which can be used as fibre for furnishing, the clothing and automobile industries and building (as geo-textiles).

Another Italian company, SRI, recycles packaging waste into secondary raw materials. It has a capacity of over 30,000 tonnes a year and separates waste derived from different grades of plastic, including PET and PVC containers, as also other materials like aluminium (from containers), iron, paper and cardboard. Once urban solid waste and industrial waste is brought to the plant, it is sorted out according to size, shape and consistency in a sifting cylinder. The plant then separates plastic film, paper, cardboard and fine waste from other packaging materials. From the remainder, a magnetic separator separates all ferrous metals. The PET material is removed and, using an optical display system, sorted into three categories: colourless, blue and coloured.

These recycling plants have played more than a merely technical role in Naples and the surrounding Campania region in southern Italy. From the mid-1990s, Naples' main landfills were filled to the brim and could not accept any more trash, a situation which Indian cities would be wise not to ignore. Much of it was industrial waste from Italy's industries which are based in the north . a classic "north versus south" issue. From 2007, municipal workers refused to lift Naples' garbage, with the result that it was left rotting in the streets, posing a serious health hazard and making the third largest city in the country notorious throughout the world.

What is not common knowledge is that the Camorra, a powerful mafia based in Campania, had a hand in this waste disposal: it would simply collect it and burn unsorted trash on the roadside to avoid detection, causing serious soil and air pollution. Law-makers and enforcers have finally acted to eliminate the Camorra from this trade.

The disposal of waste, incidentally, seems tailor-made for the underworld. If one recalls the American mafia TV series, The Sopranos, the Italian-American family in question was in the New Jersey garbage-disposal business (also used, on occasion, to get rid of troublesome opponents!). Closer home, the American Pulitzer prize-winner and US National Book Award winner Katherine Boo in her 2012 non-fiction book Behind the Beautiful Forevers: Life, Death, and Hope in a Mumbai Undercity, which homes in on a real-life slum, refers to underhand activities in this trade as well.

At the Mumbai First meet, the EU showcased the technological advances that different cities have made in recycling waste. Certain countries like Sweden have almost done away altogether with the need for landfills. They observe five steps in the hierarchy of treating waste. The first is to minimize its generation, next to reuse it, followed by recycling, energy recovery and only finally land filling. Organic waste is biologically treated to convert into energy. From the late 1990s, half Sweden's household waste is fermented or materials recovered; the other half is incinerated to produce electricity. Increasingly, the only material being sent to landfills is the fly ash left over from incineration.

The process, in a city like Gothenburg in Sweden, begins at home, where there are no fewer than four to eight separate bins. Much of the hazardous waste . abbreviated to "hazwaste" universally . like electric bulbs and batteries is returned to supermarkets. Different garbage trucks clear allocated bins outside homes on specific days of the week. At a treatment plant, kitchen waste is converted to biogas, which is then used as clean fuel for buses and garbage trucks, a neat illustration of a closed system. The residue from these plants is used as biofertiliser in fields. No wonder that the Swedish Consul in Mumbai, representing the Confederation of European Waste-to-Energy Plants, told the Mumbai First meet that the emphasis was not on waste segregation but fuel preparation.

Each treatment plant is expensive, costing between 100 and 200 million euros each. Gothenburg has five big combined heat and power plants which generate enough heat to warm a district. These employ heat exchange, with an elaborate system of radiators and pipes. However, and what might seem strange in cold Sweden, the same technology can also be reversed to provide cooling, which Gothenburg does in summer for offices, malls and hotels for "comfort". Each activity . transport, heating/cooling and generating electricity . accounts for a third of the waste. This not only saves energy but the city doesn't have to pay for fuel. On the contrary, it receives a fee for processing each tonne of waste, a win-win situation and, once again, an efficient closed energy system. No wonder that the slogan is "Don't waste the waste".

When such technologies will make environmental and economic sense in Indian cities is an open-ended question but it is likely to be sooner than later. Helsinki has 600,000 residents, nine out of ten of whom receive district heating, provided by cogeneration of waste by a state-owned plant. In European countries and cities, especially in Scandinavia, which are more ecologically conscious, these waste treatment plants do not emit hazardous fumes or leave toxic residues. 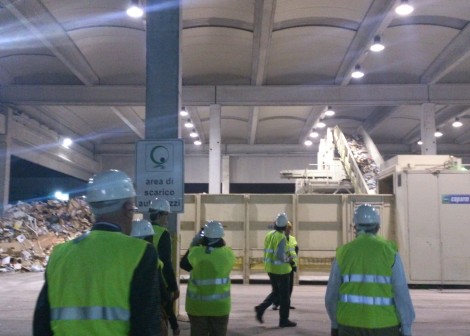 As we have seen, the situation in Indian cities is complicated by the presence of armies of sorters, the poorest of the poor. But some out-of-the-box thinking can combine the most sophisticated waste technologies with better collection of garbage.

A case in point is the initiative taken by Jamie Lerner, the three-time Mayor of Curitiba in Brazil. He is world-renowned for introducing the Bus Rapid Transit System in his town, where a dedicated bus lane in the middle of arterial roads provide the comfort and capacity of a metro at a fraction of its cost. He paid ragpickers per bag of garbage they brought to the collection centre, not with money but bus tickets. That was an innovative way of cleaning the city and popularizing public transport at the same time in a country which . unfortunately like India . worships the automobile.