This summer, stories of the impacts of drought and water scarcity that mostly highlight the conditions of farmers, cattle, domestic water supplies in villages, towns and cities have been regular. What is often not reported is the situation with industries, particularly the coal based thermal power plants, reports Shripad Dharmadhikary.
05 June 2016 -

Thermal power plants require huge amounts of water for their operation. Water is required mainly for cooling the steam that is used to generate electricity, and for disposal of the ash that is produced when coal is burnt. Typically, a 1000 MW coal-fired power plant would need 28 million cubic meter of water per year, enough to irrigate 5600 ha of land, or sufficient for the domestic water needs of around 500,000 people. Such water requirement can be a significant stress on local water systems, particularly in years of low rainfall, or in areas where there are clusters of more than one such power plant. This can either lead to power plant shut down due to lack of water, or, if the power plant generation is kept going, can impact other uses and users of water.

This is exactly what we have seen happening this year.

This year, coal based thermal power have already lost around 8.7 billion units (billion KWh) of electricity generation because of shut-downs due to shortage of water. This figure is based on data on daily generation of power plants that the Central Electricity Authority (CEA) makes public. The biggest share in this is of the Parli TPP in Beed district of Maharashtra, which has been closed off and on due to water shortages since last several years.

If we leave out Parli, then there has been a loss of 582 Million Units of electricity as plants have had to shut  down due to lack of water. These figures for loss of generation relate to the  period between 1 Dec 2016 to 24 April 2016 except for Parli TPP, for which the figures are for year starting 1 April 2015. Some of the TPPs affected include Raichur TPP in Karnataka and the EMCO Warora TPP in Maharashtra. The actual loss in generation is likely to be higher as these figures are only upto last week of April, whereas the summer and water scarcity would extend till the beginning of the monsoon, which is expected to  be around first or second week of June.

Moreover, the actual loss due to water shortage is likely to be more than these figures indicate. This is because of two reasons.

One, a number of upcoming, or almost ready-to-commission plants are also likely to be affected by water shortages. The reason is that they are in close vicinity to plants already affected, or their water sources are stressed.  For example, NTPC’s 2400 MW Kudgi TPP in Karnataka was expected to commission its first unit by March 2016. But since it is in the water scarcity hit Krishna basin, and is to get water from the Krishna River / Almatti dam – where shortage of water has already affected the Raichur TPP – the commissioning is at the risk of being delayed due to water scarcity.

Similarly, in the case of NTPC’s 1320 MW TPP in Solapur, Maharashtra, the commissioning of the first unit has been deferred to March 2017 as against May 2016 planned earlier. While the official reason is the delay in plant construction, water is also a serious issue. The project, located  in a drought prone area,  has been promised water from the Ujani dam on Bhima river in the Krishna basin. This year, the storage in the dam has been practically zero.

The state government has now suggested to NTPC that instead of taking fresh water from the dam it should take the treated sewage from Solapur municipal corporation. This suggestion is not only for this year, but as a permanent arrangement.  NTPC claims that this arrangement is not viable as it would be costly and the quality of treated water would not be suitable for its needs. Thus, the commissioning – and operation - of this almost ready plant is now at risk of significant delays and uncertainties. There are several other such cases.

The second reason for likely under-estimation of loss of electricity generation due to water shortage is that in many cases, the TPP does not shut down, but generates much less than its capacity. CEA data gives, for each day, the “Programmed Generation” (generation planned for that day) as well as Actual Generation. It is seen that often, the “Programmed Generation” is much lesser than the maximum possible generation. The unit operates at part load/part capacity. The reasons for this are often not given. We suspect that in several cases, the programmed generation may have been cut back as there is not enough water to sustain full (maximum possible) generation.

While the problem seems to be related to the deficit rainfall in a particular year, it is a manifestation of a more fundamental issue of locating water guzzling power plants in drought prone areas, and that too in clusters. For example, while the Raichur TPP in Karnataka has suffered from shut down due to water shortage this year, there are at least three other power plants coming up in its close vicinity – the 1600 MW Yermarus TPP, the 800 MW Edlapur TPP and the  420 MW Vadlur (Captive) TPP. 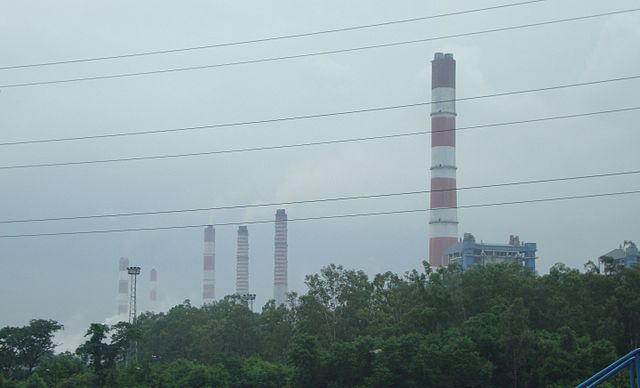 Another example is the Singrauli region on the border of Uttar Pradesh (UP) and Madhya Pradesh(MP). A large number of TPPs are located in this area. Most of them draw their water from the Rihand reservoir. Data from Central Water Commission shows that in the last ten years, the average storage in Rihand at the end of monsoon has been just 47% (of its live storage).

Locating large number of power plants in such areas of water stress creates the risk of conflicts between the other users of water like domestic users and agriculture, and power generation.

The siting policy for thermal power plants, obtained by this author under the Right to Information Act,  is a 1987 document, and consists just  one page in a 10 page document published by the Ministry of Environment and Forests (MoEF), titled “Environmental Guidelines for Thermal Power Plants”. Indeed, the MoEF has failed to update this policy in spite of an explicit direction by the National Green Tribunal dated 23 March 2012 in the Sompeta TPP case.

One important development in this regard is that the Union Ministry of Power (MoP) has taken cognisance of this issue, and has increased efforts requiring TPPs to use treated sewage where possible in place of fresh water. This move is welcome, but it should be taken up with caution and only after proper assessment of the risks involved. This is because sewage is not a “waste”.

In most cases, water is allocated to towns and cities with an expectation that the return flows – which can be as high as 80% in case of water for domestic use – shall augment the river flow downstream of the city. The return flows, which should consist of treated sewage, but in most cases is untreated sewage, are important source of water for downstream areas. Moreover, they are also used for irrigation purposes. Thus, diversion of sewage to TPPs should not be undertaken without a proper basin or sub-basin level assessment.

Ultimately, whether TPPs use sewage or any other water, they remain large users of water. Hence, the location of such plants in water scarce areas should be avoided. Planning of such plants should be preceded by a carrying capacity study, particularly in areas where a number of TPPs are planned. However, in the long run, the most optimal solution would be to replace coal fired plants with more benign sources of energy, like solar, which would not only save water but would also be greatly beneficial from the point of other adverse environmental impacts.