A young entrepreneur's new innovation promises to boost productivity and incomes in the weaving sector, and give a major fillip to an important industry in Assam. Ratna Bharali Talukdar reports.
26 March 2010 -

Dipak Bharali, a science graduate from Sualkuchi, the richest silk pocket in Kamrup (Rural) district of lower Assam, made up his mind to start his own weaving venture with just one loom in 1998. His decision not to look for a job worried and annoyed his parents. Nearly 11 years later, Dipak was awarded the prestigious President's State Award in 2009 for his innovative textile device called "Extra Weft Insertion in Handloom for Frugal Handloom Design", which he designed and developed to increase the output of conventional looms up to three-fold.

Conventionally the task of insertion of weft threads to make a variety of designs is done manually by tying knots. This is tedious and cumbersome. Dipak's device reduces the insertion time to one third the time required in a traditional loom. At a time when more and more traditional handlooms in Sualkuchi and its cluster pockets are going idle as weavers find the conventional looms less remunerative, Dipak's simple but highly innovative technology has raised the hopes of weavers, and of the traditional silk industry as well.

Dipak says he was fed up with the unproductive and time-consuming weaving process of conventional looms. "Although I started my small business with just one loom, as the business picked up I increased the number of looms to 21 within a short period. But these looms barely fetched me Rs.1 lakh, even during peak seasons. I had to also face the problem of scarcity of weavers. The output of the looms remained stagnant. This made me give a serious thought to developing some device to quicken the weaving process," he says. 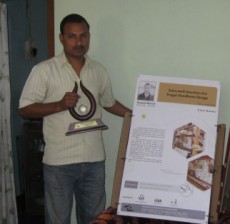 Prior to exhibiting his innovation publicly, Dipak used it in his looms on an experimental basis. (Above: The inventor with his award).

•  Weaving woes on handlooms
•  Sericulture gets a boost

And the result was the development of his award-winning device. The simple but high-utility device has three components - the base frame, magnet bearing shaft, and a specially designed bobbin. These components can be fitted to any Jacquard machine using multiple bobbins. "The device which I designed and developed is very simple and cost effective. The market price would be in between Rs.4000 and 5000. In addition, it does not involve extra energy." he says.

Prior to exhibiting it publicly, Dipak used it in his looms on an experimental basis. He came up with some wonderful outcomes - the productivity of his looms increased up to three-fold. He is confident the improved productivity will help raise the wages of weavers. Even though Sualkuchi is the richest silk-weaving pocket in the state with around 80,000 handlooms, low wages remain a problem. Since workers are paid according to output, a faster loom should result in better incomes for them. A tough business

Weavers migrate to Sualkuchi from other places, and engage themselves in weaving, against wages on a per-meter-per-design basis. These weavers mostly come to Sualkushi, to earn something before they get married and then return immediately after their wedding to their own villages. These weavers, mostly women, and often poorly paid - earn around Rs.2200 to 2500 per month. The low wages and poor living conditions discourage weavers from staying on in Sualkuchi for long periods. Dipak says that more than 25 per cent of the looms remain unproductive throughout the year.

The master weavers who appoint the weaver also face some problems. Sometimes, weavers disappear after taking advance payment of their wages, and master weavers have to bear this risk. "This is the reality. These migrant weavers are not well paid, as master weavers cannot pay them more. Master weavers have to pay huge amounts to procure yarn. Assam is not a yarn-producing state and weavers have to depend on outside markets like Kolkata and Bangalore for yarn procurement. Additionally, the master weavers also have to give them accommodation. Due to these liabilities, the wage for weavers has always remained low", says Prafulla Bharali, Deputy Director of Department of Handloom and Textile.

A marketing study of the Muga and Eri silk industry in Assam, conducted by Central Silk Board identified a number of problem areas. Some of these include, "shortage of skilled workforce; migration of skilled weavers at frequent intervals; inadequate living conditions of women workforce, forced to live in social isolation, and lack of ancillary facilities for childcare, education and entertainment".

The popularity of local handloom designs was also kept in mind while developing the device, Dipak adds. The state has a rich tradition of indigenous handloom designs. The history of handloom products design dates back to 180 AD, when Muga, the golden thread silk fabric was specially designed as costume for solders of Kirat kings. To keep these warriors distinct in their identity, Muga silk fabrics were converted into a designed costume wrapper with brand names as Peetambari and Uttari. These fabrics were woven in a small river island named Suban Kuchi, later identified as Sualkuchi.

Since then, it has passed through several phases at different times in history. During the first half of the 19th century, Jacquard was introduced by a British officer for weaving design fabric with extra weft. After Independence, design weaving started on a large scale at Sualkuchi to meet local requirements. From here, the need for designed silk fabric was met for the entire north eastern region. 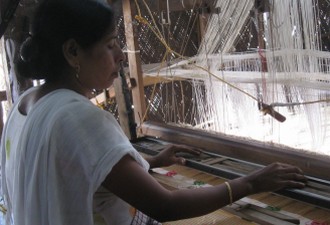 Some of the traditional popular designs of the state include Magar (peacock, dancing peacock and structure of peacock wing), Kaziranga (elephant, rhino, deer, tiger and birds of Assam), Kalsi (pitcher with coconut and flowers, Sarai and Japi, mostly used in Assam) Diamonds (hexagonal designs) and flowers (leaf, creepers, branches and some plants popular in the state). Additionally, there are some popular tribal designs depicting huts, flowering trees with branches, some unique geometrical designs, animals and other motifs.

Kishore Kalita, Fellow of the Guwahati chapter of National Innovation Foundation (NIF), an autonomous body under the Department of Science and Technology, who has been helping Dipak in developing the device says that when NIF came to know about his efforts, it immediately contacted Prof. A K Das of the Department of Design, IIT Guwahati, who assured him about the genuine-ness and utility of the device. "Later, under the guidance of the IIT, Guwahati and financial assistance from NIF, the device was further improved,' Kalita says. NIF has also provided Dipak a Provisional Patient for his device in 2009, and a final one would be given in 2011 after all norms of the patenting process are met.

Meanwhile, an enthusiastic Dipak, with the Rs.5,70,000 he has received in different stages as grant from the NIF, has taken up large scale production of his device. He has also invested Rs.4,00,000 from his own pocket for commercial production. "I have toured and travelled to different places and visited a number of trade fairs to make people aware of the device. Till now I have received around 600 orders. I will deliver them soon" he says. He is also hopeful of getting some orders from the department of Handloom and Textiles.

Prafulla Bharali, who is highly optimistic about the device, says that the commercial production of it is likely to boost the weaving sector. The department has 12,00,000 registered weavers under it. He claims that these account for 33 per cent of the country's total weavers in the handloom sector. The department has been facing constraints in providing assistance to more people, partly because margins in the weaving sector have been low. The new device, he says, will change that, and hopefully help more people take up weaving.