Where does the Yamuna flow?

It is one thing to decide in a court of law that the floodplain of the Yamuna does not extend to the site of the Commonwealth Games village. It is quite another thing to keep the river out. Kanchi Kohli reports.
31 October 2010 -

New Delhi is gradually inching back to itself after a period of succumbing to national pride. The city has exhaled the razzmatazz around the organising of the 2010 Commonwealth Games (CWG). Buses are back on the roads, people back to work and Shera, the Games mascot, now lies unmasked in godowns.

And so it is time to look at all the scandals whose investigations were put on hold in the interest of holding the Games themselves. The financial irregularities, the shoddy work until very late in the day, the security inadequacies were all kept at bay to make the event take place without the spotlight being on the taint of these failures. But the morning after the closing ceremony, an enquiry was initiated into the corruption scandals, many of them pointing to members of the Games Organising Committee.

All of this is quite necessary, but even these investigations are not looking at one particular aspect - namely the long-term damage done to the river on whose bank the event was held.

The location of the CWG Village

In September 2003, when the Commonwealth Games Federation selected Delhi as the venue for the XIX Commonwealth Games, the most important decision to be made was identifying the site of the Games Village, where the athletes would stay for the duration of the event. Picking a location just off National Highway 24 leading from Delhi to Ghaziabad and beyond, the Delhi Development Authority (DDA) - through a public-private partnership - gave charge to Emaar MGF, one of India's premier real estate and infrastructure development companies for the construction of 1100-odd "purpose-built, self-contained premium residential community." On the completion of the games the profits were to be shared at 33:66 ratio between DDA and the builder who would put it up for sale as prime property available for purchase in the open market.

Even as DDA and Emaar MGF discussed the modalities of the project (including a period where the private company went through a financial crunch and had to be bailed out by DDA), the location of the CWG Village itself came under question. The site, known as Yamuna Bank would include not only the housing units for the athletes, but also the Delhi Metro Rail Corporation (DMRC)'s depot, yard, station and residential complex.

In 2007, a group of concerned citizens and organisations including Vinod Kumar Jain, Magsaysay award winner Rajendra Singh, the heritage conservation group INTACH, and others approached the High Court of Delhi. In their writ petition (W.P. (C) 6729 and 7506 of 2007) challenging the construction activity going on the Yamuna riverbed, they alleged that this would damage the ecology and water-recharge ability of the river, and also impact the livelihoods of the agricultural communities who depended on its floodplain.

Almost all the government respondents refuted the apprehensions and allegations put forth in the public interest litigation. The Ministry of Environment and Forests (MoEF), Ministry of Youth Affairs and Sports, Ministry of Urban Development and Poverty Alleviation, the Government of Delhi, DMRC and DDA filed separate counter affidavits which justified the site chosen for the CWG village and the DMRC complex, citing various studies and reports.

Among the various reports brought to the court's attention, two were crucial - those by the National Environmental Engineering Research Institute (NEERI), Nagpur and the Central Water Power Research Station (CWPRS), Pune. The NEERI had earlier prepared reports in 1999 and 2005 which had warned against urban sprawls and construction of residential and industrial facilities on the Yamuna riverbed. These had been commissioned by the DDA with the overall objective of rejuvenating the Yamuna river. As for the CWPRS report, Manoj Misra from Yamuna Jiye Abhiyan says it was "a limited study that went into the question of flood impact on the planned CWG Village but which became the excuse for the MoEF to revise its earlier clearance given to DDA for only temporary structures, into permanent structures."

In the wake of unprecedented rains this monsoon season, the Yamuna, oblivious to the Supreme Court verdict, continued to spread into the floodplain and right up to the CWG village and surrounded the DMRC complex as well. Basements in the CWG buildings were flooded with river waters seeping in from underneath the 'protective' bund.

•  Narcissism of the neurotic
•  Wounded pride, or vanity?

Consequently the entire construction came to be challenged before the High Court in 2007. In the course of this process of legal battle NEERI submitted another report in 2008. This report was subsequent to a site visit by the panel of judges to the CWG village and DMRC construction in January 2008. The 2008 report was critical and a clincher for the DDA. The report stated that recent constructions on the Yamuna riverbed, such as the Akshardham Temple and an adjacent embankment have reshaped the riverbed and therefore the CWG village would not pose an environmental threat to the floodplain.

The High Court of Delhi, after hearings that continued over five months, took another eight months to come up with an interim order. This order sought to to establish an expert body headed by Dr R K Pachauri of The Energy Resources Institute to advise the High Court on the potential impact of all existing, ongoing and planned constructions in the river bed on the ecology of the river. The court's final decision would be based on this input.

The interim verdict was appealed to the Supreme Court, which took a different view. The apex court first stayed the ruling and in July 2009 gave a potentially far-reaching judgement. In the verdict, the court questioned the 'environmentalism' of the petitioners and also the conclusions of the Delhi HC. The reports of CWPRS, the affidavits of all the government authorities, and the three NEERI reports read in conjunction were enough, said the court, to conclude in favour of the construction of the CWG village.

The judgment stated, "The High Court disregarded and ignored material scientific literature and the opinion of experts and scientific bodies which have categorically said that the CGV site is neither located on a "riverbed" nor on the "floodplain." To further stamp this opinion the apex court also referred to an earlier decision of the Supreme Court relating to the construction of the Akshardham temple, which had concluded that the distance between Yamuna river and the temple was nearly 1700 metres. The CWG village is located adjacent to the temple and for it too the same logic would be applicable, said the court.

The city of Delhi, the states surrounding it, and the Yamuna's catchment areas in Uttarakhand and Himachal Pradesh received unprecedented monsoon rains in August-September 2010. For the first time since 1978, the floodplains of the river mushroomed new vegetation. Temporary shelters of farmers had to be removed, and a massive rehabilitation exercise for colonies situated on the floodplains became necessary.

What added to the river's glory and the city's woes was the release of additional water from the Hathnikund barrage in Haryana - reportedly the highest in the last 100 years. A report in Times of India indicated that, "for three hours at a stretch, the barrage saw 7,44,507 cusecs water passing through its gates, more than what was released in 1978 when Delhi witnessed its worst-ever floods." 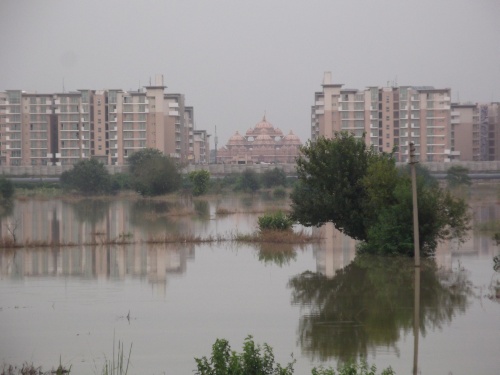 None of this prompted any reference in media reports to the Supreme Court verdict, although the flooding was hitting everyone in the face. The Yamuna, oblivious to the verdict, continued to spread into the floodplain and right up to the CWG village and surrounded the DMRC complex as well. Only the motor road and the new constructions near it blocked the spread of the water into CWG village itself. Basements in the CWG buildings, however, were flooded with river waters seeping in from underneath the 'protective' bund, which could do nothing to undo the reality of the land being the riverbed or the floodplain of the river.

The rains calmed a few days before the CWG opening ceremony, and the waters receded. But while the Games escaped the wrath of the river's swelling, there is no evidence that any of this will lead us to question the political decision to locate the CWG village where it is. The question then to ask is, will the Yamuna ever regain its lost course?