Despite two high-level recommendations to repeal the Armed Forces Special Powers Act, the law remains in place. The Army is right to insist on its view, but there are things that can be done to improve matters, writes Firdaus Ahmed.
29 April 2010 -

The new Army Chief has spoken his mind on the Armed Forces Special Powers Act (AFSPA), which gives the military special powers of arrest and operation in certain 'disturbed' parts of the country. "Any dilution of the Act will impinge adversely on the manner in which the armed forces operate," he said recently, adding that "in constrained and trying circumstances, the armed forces need requisite legal protection". He knows what he's talking about - his immediate past experience was in command of the Field Army deployed in countering insurgency in the North East, and he has been an infantry officer with counter insurgency experience at the grassroots and at the operational level.

The chief's view explains the Army's reservations on the draft of an amended version of the AFSPA that the Ministry of Home Affairs had sent around for concurrence. The changes were intended to make the Act more 'humane', stemming from the promise of the prime minister during his visit to Manipur in the wake of agitations over the alleged killing of Manorama in mid 2004. The Army had then stalled appearing before the Upendra enquiry into the episode, citing that under the Act special permission would be needed for any such probe. That further fueled the attacks against the Army by human rights groups and other NGOs, who rightly demanded more accountability for the Army's actions.

The BP Jeevan Reddy committee, appointed after the PM's visit, recommended outright repeal of the Special Powers Act. The Second Administrative Reforms Commission headed by K Veerappa Moily in its report on Public Order seconded Reddy's opinion. But for the moment, the Act remains well and truly in place, and continues to be a point of major contention between rights organisations and the State.

A second, but more important change, was needed in respect of Section 4(a) of the Act, which reads: 'if he is of opinion that it is necessary so to do for the maintenance of public order, after giving such due warning as he may consider necessary, fire upon or otherwise use force, even to the causing of death, against any person who is acting in contravention of any law or order for the time being in force in the disturbed area ...' This clause has been considered draconian. But the Army has not proved agreeable to half a decade of exertions in the Ministry of Home Affairs and the Law Ministry on this point.

Why? Because the Army prefers to see itself as the force of last resort in internal security situation. The role is itself seen as a secondary one to its primary role of fighting and winning the nation's wars. Therefore, if the situation is bad enough, it feels it requires the powers necessary to cope with it including legal cover for its soldiers. This is especially so given the information war that surrounds insurgency, in which allegations of human rights violations are a weapon. 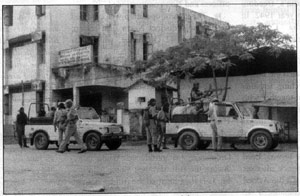 The Army feels that if the situation is bad enough to warrant deploying it, then it requires the powers necessary to cope, including legal cover for its soldiers.

This perspective itself is not problematic. Extraordinary situations require extraordinary powers to cope, lest the republic unravel. What is problematic instead is the Army's insistence that it would deploy only under the legal cover of the Act in areas declared 'disturbed' under Section 3 of the Act. Thus even where the situation is not bad enough to warrant Army deployment with such powers, the Act is invoked to enable the Army's deployment.

The Army may have its own logic for such insistence - namely, by insisting that the law be invoked protects it from being used as a default option in internal security, as yet another paramilitary. The challenge, therefore, is to identify situations that warrant Army deployment under the Act and how to cope with those situations that are less critical. Understanding, if not agreeing with the Army's position has led to the government's position on a consensus, with the Army on board, before any further move is made. In the interim however much can be done.

Firstly, in areas where the Army's efforts, among other reasons, have brought down the insurgency to manageable levels, a review must be carried out to determine whether continued Army deployment is necessary. The J&K government has been asking for this for better part of the last decade. The political dividend of this would be more useful in making balance of the insurgency recede than anything the Army is currently doing by remaining deployed. Even if this may not be readily possible in the Valley, an experiment can be done with withdrawing both the AFSPA and Army deployment in districts south of Pirpanjal.

Similarly, there is a strong case to be made for vacating the Army from its deployment in Assam also, in particular lower Assam and the autonomous councils. Here, the state government has continued with Army deployment even where not required. Therefore a proportion of the blame must go to elected representatives in state legislatures, rather than the Army.

Secondly, the Center need not be as protective as it has been over granting permissions for the Army to be investigated where it is remiss. The Army in any case follows up on allegations and takes pride in delivering justice where warranted. However, as the Manorama case indicates, institutional interest may at times override higher considerations. The Supreme Court has required the government to be strict, stating, "A complaint containing an allegation about misuse or abuse of the powers conferred under the Central Act shall be thoroughly inquired into and, if on enquiry it is found that the allegations are correct, the victim should be suitably compensated and the necessary sanction for institution of prosecution and/or suit or other proceeding should be granted under Section 6 of the Central Act."

For instance, the J&K state government made 38 requests to prosecute soldiers, but no permission was granted by the Centre. Defence Minister A K Antony told the Rajya Sabha that 133 complaints were made against the Army between 2004 and 2009.

The AFSPA is perhaps necessary to deal with extreme situations. Such situations are a rarity. This must first be recognised, and wherever the situation start becoming normal, the Act needs to be withdrawn. However, in case the Army is still needed in such cases, then it can be deployed under cover of the relevant Code of Criminal Procedure sections, rather than the AFSPA. This may deprive of its extensive powers, but since these would not be necessary in less critical situations, it can afford to forego them.