India has made cotton fabrics for 20 centuries, and its scale in India was unimaginable. But modern market structures have pushed millions to the edge, and a few intense efforts, such as those of Dastakar Andhra, are not enough to reverse this. Darryl D'Monte reports.
09 September 2008 -

It is easy to spot Uzramma, even in a crowd. The founder-President of Dastakar Andhra from Hyderabad is dressed ethnically, in a distinctive cotton sari and has the quiet, intense demeanour of an activist who has devoted many years of her life to the cause of traditional textile weavers.

She was in Mumbai recently, and gave a talk at the Centre for Education and Documentation (CED). After decades of working in this sector and also researching it in archives at home and abroad, combining practice and theory, she feels the need for an organisation like the CED to document and disseminate the findings on how traditional cotton weavers can have a future - while scores of them are committing suicide in her home state, in Maharashtra and elsewhere.

She plunged straight to the questions she hears the most: why had she chosen to work on cotton textiles? She cited the demon Bakasura from the Mahabharat. The demon terrorises the forest, devouring the animals there. The animals, mindful of the need to survive, form a union of each species and negotiate with Bakasura, offering up some of their kind by rotation. However, the demon's demands escalate rapidly and the animals begin fighting each other rather than concentrating on their single enemy. The moral is simple: with the resource base shrinking, the polity is dividing itself - left versus right, saffrons versus greens, and so on.

Finally, the animals get their act together, persuade the demon to look down a well, where they point to his larger-than-life reflection and explain that he has a bigger competitor. As the demon contemplates his mirror image, they push him into the well and exterminate him for good.

"The market is the face of the demon today," Uzramma elaborates, "you have to get rid of the demon itself." We had a whiff of this uncompromising stand when at the outset, she refused to accept a cup of tea, observing that all of it was marketed by multinationals, which most consumers don't take into account.

She has been working on 'artisanal' cotton textile production since 1990. This includes several processes - making yarn, weaving and dyeing. She believes that textiles have gone through a different history during the pre-colonial period because - unlike other sectors of the economy - it was relatively less hierarchical. "A large part of society was engaged in production," she observes. "There were lateral relationships." Later, she elaborated on how Hindus and Muslims worked in harmony, albeit in different sectors of textile production. She has found, in the course of her prolonged engagement with this traditional industry, that it was best to combine practical work, even designing new spinning units, with historical research.

For instance, a British expert, John Forbes Watson from Lancashire, was sent out to India to find out why the natives were not buying mill cloth from his home country, which was cheaper. He discovered that because of the 'sizing' or treatment of the fibre in the UK, it rotted within three months under the hot and humid Indian sun. Historical archives, mainly in England, but also in other European countries like France and Germany, would reveal such nuggets of valuable information.

The British sought to introduce accessories which were not indigenous to the highly localized and differentiated textile industry here. Thus, steel rods made by the Imperial Textile Industry in the UK were imported through Surat - which is where the East India Co set up its first trading 'factory' early in the 17th century. Stalks of jowari which had been traditionally used as bobbins were replaced with metal models.

For Uzramma, this is the Bakasura, the separation of the producer from the customer. Formerly, the two would have been umbilically linked in the same village.

•  The cotton-to-cloth chain
•  Weaving woes on the looms

Uzramma believes that "the direction of technology is centralized now", unlike the scattered and locally variegated forms of production which existed in the pre-industrial stage. For her, this is the Bakasura, the separation of the producer from the customer. Formerly, the two would have been umbilically linked in the same village, or at least in nearby villages.

In her prolonged initiatives to revise these earlier forms of production, she has learned the value of 'lateral learning'. "I have learned with so-called students and learners," she says. She refers to Edward Said's characterisation of imperialism, where the colonial power acts invariably as the teacher or judge, imparting superior knowledge to all those whom it lords over. This is not to be questioned, but accepted blindly.

An official census in 1987-88 estimated that there were between 2 and 2.5 million weavers directly working on handlooms, and another 1 million engaged in related activities. Weavers' organisations estimate the figure is ten times higher, at 20 million, working on 3 million handlooms and an equal number engaged in pre- and post-weaving operations. This is an exaggeration because those directly employed would be equal to the total number of jobs in the textile sector as whole. However, there would have been an undercount in the official census, since most handlooms are in the household, and hence the true figure will lie somewhere in between.

As a Dutch scholar, Hubert van Wersch, who documented the historic cotton mill strike of 1982-83 in Mumbai notes, "Of all the sectors of the textile industry, the handlooms have by far the greatest employment potential ... it seems reasonably safe to state that some 10 million people and possibly 15 million find employment in the handloom sector". 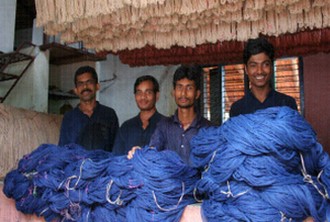 There are only three vats left where the traditional blue dye is made. (Picture credit: Pankaj Sekhsaria)

The Sivaraman Committee set up by the Planning Commission in 1974 found that for every power loom set up, six handlooms was rendered idle. This meant that every job in the power loom sector displaces 14 handloom weavers. Between 1963 and 1974, power looms overall grew at nearly 10 per cent per year and cotton power looms twice as fast. By the Sivaraman committee's ratio, the 290,000 power looms added between 1974 and 1988 should have displaced 1.74 million handlooms, which in turn would have rendered some 4.176 million people in this sector jobless every year.

This extent of immiseration has never been reported. But, circumstantially, it is known that in 1991, for instance, there were 110 deaths of handloom weavers in Andhra Pradesh due to starvation or suicide. By 2001, when the quantitative restrictions on imports of textiles were removed and the economy was exposed to globalisation, it was unofficially reported that there were 400 cases of suicides and starvation deaths among handloom and traditional power loom weavers from 1999. As many as 40 power loom weavers committed suicide in the first half of 2001 and others were threatening to follow suit.

Another perceptive scholar, C. Shambu Prasad, traces a related tragedy : the suicides of cotton farmers - 300 in Andhra in 1998 and later in Vidarbha - to the downgrading of Indian species of cotton in colonial times. He writes:

"The history of cotton growing in India since 1790, when Bourbon, the first exotic variety was introduced, can be seen as essentially one of the replacement of indigenous varieties of cotton, which had been carefully bred over centuries to provide the world's best cloths, by American varieties, to suit the emerging mill production in Lancashire. Consequent to the poor understanding of the difference of the two types of cotton, the indigenous was branded 'inferior'. While the 'deindustrialisation' caused due to colonial rule has been well researched, there is little understanding of the technical dimensions of the processâ¦

"Cotton in India, unlike in other parts of the world, came into general use as clothing for the rich and poor at an early stage in history. Cotton cloth reached a stage of perfection that made Indian textiles known all over the world and the textile industry gave employment to vast numbers of people at each stage of production. Different varieties were grown in different parts of the country, each being suited to the local soil, water and climate."

Britain's policy was to ensure that India remained a source of raw material - cotton - and a market for finished products. Indigenous cloth manufacture was taxed at every stage. Shambu Prasad quotes from a letter that a planter, F C Brown, who spent several years in the Madras presidency, wrote to the Raj administration in 1862:

"The story of cotton in India is not half told: how it was systematically depressed from the earliest date that American cotton came into competition with it, about the year 1786, how for 40 or 50 years after, half of the crop was taken in kind in revenue, the other half by the sovereign merchant at a price always below the market price of the day, which was kept habitually low for the purpose; how the cotton farmer's bullocks were taxed; the 'charkha' taxed, the bow taxed, and the loom taxed; how inland custom-houses were posted in and around every village, on passing which cotton, on its way to the coast for sale, was stopped, and like every other produce taxed afresh; how it paid export duty both in a raw state, and in every shape of yarn or thread, cloth or handkerchief, in which it was possible to manufacture it."

As household spinning declined, both the growers and weavers of cotton became the clients of the intermediary spinning mills. The import of machine-made yarn into India "broke the connection between the cultivation of cotton, the spinning, and the weaving." While cotton had been grown largely for local consumption, it began to be cultivated for export and the numerous textile production centres dotted across the country declined.

Significantly, Shambu Prasad argues that the length of staple, so important for Lancashire machines, which imported cotton from America, was not crucial to India's production. Dacca muslin, "the finest cloth in the world", was produced from the shortest staple. A British commentator in the Raj noted that machinery manufacturers had a lot to learn from Dacca muslin. A comparison between Indian and American cotton in the 19th century under a microscope revealed that the former was much finer. However, once desi varieties were condemned as inferior, it was equated with coarse cloth. The need for a different kind of machine to suit the specificity of Indian staple received little attention.

Uzramma has set up the Decentralized Cotton Yarn Trust in Hyderabad. The weavers in eastern and western Andhra Pradesh are mostly Hindus, while the reed-makers are Muslim. There may be no socialization between the two, but a high degree of inter-dependence. She cites the survival of master craftsmen like Kattubadi Yellappa, the last surviving indigo dyer in Anantapur. There are only three vats left where the traditional blue dye is made. "India made cotton fabrics for 20 centuries. The scale was unimaginable. Cotton-making was closely meshed with life," she sighs.

There is no question that Indian weavers are literally struggling for their survival today, and efforts like Uzramma's are required in each and every niche of the country. It is a matter not only of preservation of these indigenous technologies but a matter of livelihoods. The silver lining is that with the resistance in the West to pesticides - cotton, one must recall, is the biggest consumer of these chemicals - there is a growing market abroad for organic textiles, including those made with vegetable dyes, and this opens the door, albeit slightly, for traditional weavers.