Since Kerala and ASEAN countries both produce several similar items, competition from the latter is a cause of worry in the former. But the Centre has over-ridden the State's objections to the free trade agreement, writes Bhaskar Goswami.
15 August 2009 -

In recent weeks, a number of arguments have been put forth on the likely gains and losses from a Free Trade Agreement (FTA) with the 10 member Association of South-East Asian Nations (ASEAN). One voice consistently raise in opposition to the treaty has been that of the Government of Kerala. Since Kerala and ASEAN countries both produce several similar items, competition from the latter is a cause of worry in the former. The State Government vehemently protested against going ahead with the deal; notwithstanding this, however, Prime Minister Manmohan Singh secured the approval of the Union cabinet on July 23, and the deal was signed on August 13 at Bangkok.

Though India has a negligible stake of one per cent in ASEAN trade, the overall trade with the bloc has expanded from US $7 billion in 2001 to US $39 billion in 2007. This dramatic increase in trade is one argument being routinely put forward in favour of the FTA. However, if one examines the figures closely, it is clear that India is emerging as the loser from the agreement, because imports into India far exceed exports to ASEAN countries. This imbalance, known in economic parlance as a trade deficit, has spiked from US $3.5 billion to US $14.5 billion during the same period, and now accounts for roughly 15 per cent of India's total trade deficit.

Between 2005-06 and 2006-07, while India's exports to the ASEAN countries grew by about 21 per cent, its imports from those countries went up by a whooping 66 per cent. To bridge this rising trade deficit, one of two things must happen - either a lot fewer goods must be imported into India (and this can be achieved by placing higher tariffs on such imports), or exports from India into ASEAN should triple. Neither of these is likely, however, and the reasons are not difficult to figure out. 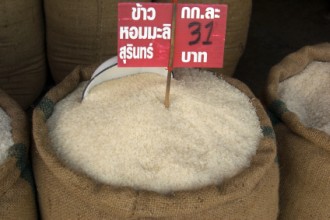 The Centre has been eager to point to the negative list of 489 items, which will not undergo any tariff cuts. But ASEAN's similar list has 2200 items!

India's average applied tariffs in agriculture and non-agriculture during 2007 (34 and 12 per cent respectively) are higher than ASEAN tariffs (12 and 7 per cent respectively). Conventional wisdom would suggest that in such a scenario India's exports to ASEAN should rise, and correspondingly its imports from those nations ought to shrink. But this did not happen; i.e. desptie the advantage in tariffs, Indian has been unable to match imports from ASEAN countries with its exports. With the FTA just signed, import tariffs on around 4000 items will fall to zero, creating an even greater impetus for ASEAN exports to India. For the foreseeable future, we must expect the trade deficit to further widen.

The Centre has been eager to point to the 'negative list' of 489 items, which will not undergo any tariff cuts and will therefore remain protected from imports as before whereas for products that do not figure on the negative list, duties will be reduced in a phased manner and brought down to zero by 2019. But the list of items not on the negative list is much larger than those on this list. For instance, import tarrifs on 60 per cent of agriculture tariff lines will be brought down to zero.

For a state that exports 80 per cent of its agricultural produce, Kerala's concerns must not be trivialised. But this is precisely what the Centre is doing. The UPA government notes that five items - tea, coffee, pepper, crude palm oil and refined palm oil - are on the 'highly sensitive' list, and will undergo only partial duty cuts in 2019. This, the government argues, ensures that they will be protected. But this assurance, made particularly in response to concerns from Kerala, hides larger truths.

Take the case of palm oil, where the applied tariff for crude palm oil is zero, and that for refined palm oil is a very low 7.5 per cent. These low import tariffs are hurting coconut farmers in Kerala. The government argues that under the FTA, these rates can be increased to 37.5 and 45 per cents respectively in the event of an import surge, but even this higher rates are far lower than the rates allowed under the WTO to protect against such surges - the global trade body allows surge-protection rates for palm oil to be set as high as 300 per cent. Ironically, the Indian government sought and obtained this higher protection in the WTO; to now dilute it in a different trade agreement defies logic.

Similarly, tariffs on tea and coffee are being reduced from 100 to 45 per cent, and that for pepper from 70 to 50 per cent, and the government claims that these items are protected as a result. But the difference in productivity of these crops between Kerala and the ASEAN bloc is vast, and even 50 per cent tariffs are not sufficient to overcome this.

Productivity of pepper in Kerala is around 320 kilograms per hectare (kg/ha), while Vietnam produces 1.2 tonnes and Indonesia 2.3 tonnes from the same area. Cheap pepper imports meant for oleoresin extraction will easily find their way into the open market, and depress prices. Similarly, productivity of coffee in India stands at 765 kg/ha while Vietnam produces 1.7 tonnes/ha. This year coffee exports from India have dipped by 20 per cent over the preceding year on account of higher price of Indian beans. Aggressively priced coffee from Vietnam can easily displace Indian coffee from domestic markets too. If one factors in the high cost of cultivation in Kerala as compared to Vietnam or Indonesia, the State Government's fears of trade diversion due to cheap imports are very real.

Curiously, while the government is highlighting the virtues of India's negative list, it is absolutely silent on the list of sensitive and highly sensitive items of ASEAN. Although this list has not been put in the public domain, ASEAN has maintained that for India it will be the same as what exists under its FTA with China. The cumulative 'sensitive' and 'highly sensitive' list of the 10 ASEAN member countries has 2200 items - more than 4 times the number of items in India's list. Thus, it appears that India has received the worse of this deal. While ASEAN will continue to safeguard its markets, India has decided to open the floodgates for cheap imports.

One reason the UPA has been eager to close this deal is that it anticipates likely gains for India in the services sector, for which negotiations with ASEAN are yet to begin. India is among the top ten services exporting nations globally, while ASEAN is a major importer. At $150 billion, ASEAN's imports in this sector are almost half as large as that of the USA. That is the gain which the Centre is eyeing, even as it now makes huge concessions in agriculture.

But this trade-off is not something India can afford to make casually; in the Indian economy, communities do not easily move between different professions and such deal-making is risky. India has historically been unable to muster strong negotiating teams in trade discussions, and this has been made worse by routine disregard for the negative impacts on some communities from trade deals. This FTA continues in the same vein. The pain of Kerala farmers is likely to be significant. And the gains in the services sector, even if they materialise one day, will do nothing to help the farmers who will lose today.

Bhaskar Goswami is with the New Delhi based Forum for Biotechnology and Food Security.