Erratic monsoon patterns and other disruptions by climate change are reducing the number of fishing days in the waters of coastal Kerala. Small-scale fishers are quitting, and looking for other livelihood options to support their families. K V A Khadar reports.

Until recently, Kerala's coastal population had every reason to rejoice the arrival of the monsoon in the state. Apart from numerous good fishing hauls, important celebratory moments like weddings came about during the monsoon season from June to August, as they generally attained economic stability during the period. However, over the last few years, climate change and ensuing shifts in the marine environment have disrupted the rhythm of their lives. Long gone are the days of big catches and the subsequent rise in seasonal income for small-scale fishers.

"Our age-old custom of planning and celebrating big events during the monsoon season has come to a halt as this period no longer offers us a stable income for the past few years. Lately, the monsoon is quite erratic in its patterns resulting in a reduction in the number of fishing days, and thus becoming the worst-hit season of the year," says 55-year old Ponnan K, a traditional fisherman from Alappuzha.

In addition, the unavailability of commercially important fishes also adds to their woes. "These days we return with empty boats. Going out fishing only adds to our debts," says Unnikrishnan T B, another fisherman from Vypin in Ernakulam district. Like Ponnan and Unnikrishnan, as many as 1,37,248 active fishermen in Kerala are passing through a difficult phase in their life, as the impacts of climate change are taking a toll on the livelihoods of the small-scale fishermen who go for fishing primarily to feed their families on daily basis.

Empty fishing baskets. Traditional fishermen in Ambalappuzha
are disappointed by the reduced catch after a fishing trip.
Photo by KVA Khadar.

A series of environmental phenomena such as rapid warming of the Indian Ocean, sea-level rise, frequent occurrences of cyclones and associated impacts such as the vulnerability of many fish stocks and disruption of fish food like planktons are attributed to climate change by marine scientists. Loss of working days coupled with the depletion of resources has spelled doom for the livelihood of resource-poor fishers in Kerala. A drastic drop in the availability of the Indian oil sardine has further deepened their trouble.

In a recent research article, Changing Status of Tropical Cyclones Over the North Indian Ocean published in the journal Climate Dynamics, a group of scientists observes that the frequency, intensity and duration of cyclonic storms have increased in the Indian Ocean. According to them, the frequency of cyclones has increased by 52 per cent in the Arabian Sea (during 2001-2019) and that of very severe cyclones has risen by 150 per cent. While the intensity of the cyclones increased in the region by about 20 per cent to 40 per cent, the duration of very severe cyclones is up by 260 per cent in the Arabian Sea, says this study.

"The sea surface temperature (SST) has increased by 1.2 degrees to 1.4 degrees for the past century. The surface temperature in the Arabian Sea sometimes rose to 31˚C-32˚ C which is 28˚C-29˚C normally," says Roxy Mathew Koll, Climate Scientist with Indian Institute of Tropical Meteorology, Pune and one of the authors of this study.

Rapid warming of the sea and associated impacts, including cyclonic storms, adversely affect the fishing calendar days. With a substantial increase in alerts on cyclones or extreme weather conditions followed by Cyclone Ockhi in 2017, the number of fishing days has drastically come down, impacting the livelihood of fishermen. Annual marine fish landing estimates of the ICAR-Central Marine Fisheries Research Institute (CMFRI), Kochi shows Kerala experienced a fall of 46 per cent in the number of fishing days in 2017 compared to the previous year due to Cyclone Ockhi.

Some scientists call the phenomena 'weather shocks', which according to them have adverse effects on marine environment. "Change in ocean ecosystem following a series of climatic issues directly affect the small pelagic resources such as oil sardine," says Grinson George, marine scientist and Senior Programme Specialist of the SAARC Agriculture Centre, Dhaka, Bangladesh. According to George, who works on climate-related aspects in fisheries and aquaculture in South Asian region, weather shocks and associated developments in the waters influence the distribution pattern, life cycle, behavioural changes, migration pattern and reproduction of the fish stocks.

Vulnerability of fish to climate change

Another study by Koll signals the reduction of primary productivity such as phytoplankton in the waters owing to rapid warming over the tropical Indian Ocean. The study, published in the Geophysical Research Letters, finds that "enhanced ocean stratification due to the rapid warming of the waters suppresses nutrient mixing from subsurface layers", which affects fish resources. Rapid warming of the Indian Ocean may potentially turn this biologically productive region into an ecological desert, the study warns. 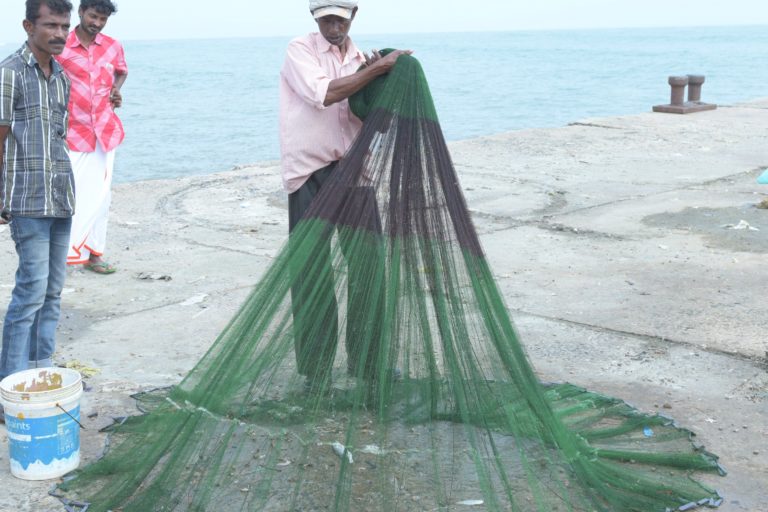 A traditional fisherman handling his net for fishing in coastal waters of Thalassery.
Photo by KVA Khadar.

ICAR-CMFRI's vulnerability assessment of Indian marine fishes to climate change also shows that ocean temperature, current speed, direction and chlorophyll have an influence on the biology of fishes. According to this study, 30 per cent of fish species are vulnerable to climate change along the south-west coast (Kerala, Karnataka and Goa). "Large magnitude of changes in ocean temperature is expected by 2055 affecting the highly vulnerable species. These would influence changes in distribution and species composition. Our study finds that fishes which lead complex lifecycle, high exploitation and low adaptive capacity are prone to climate change," remarks P. U. Zacharia, Principal Investigator of this study.

The very familiar common name kudumbam pularthi (family provider, or family caretaker) given to oil sardine among the fishing community points to the economic significance of the species in Kerala. The decrease in the availability of oil sardine is hitting the economic stability of coastal communities. In a recent study, the ICAR-CMFRI points out that oil sardine resource in Kerala waters is severely affected by climate change related disruptions. After a record harvest of nearly 4 lakh tonnes in 2012, catch of oil sardine is on a declining trend in Kerala every year. For the last five years, there has been a sharp decline of oil sardine along the coast of the state. The fish registered a slight increase in 2017, but continued to slide during the following years. In 2019, the catch of sardine was just 44,320 tonnes and the yield again dropped to one-third the following year.

The fish landing data throws light on the disquieting condition of Kerala's active fishermen, out of which 68 per cent fall under BPL (Below Poverty Line) category, according to the latest census report. Normally, sardine harvest fetches good income to the traditional fishers during the monsoon period and a decline of this reousrce alone can trouble their economic safety. Substantiating this view, another CMFRI study reveal that following the reduction in oil sardine landings, the average net returns of Kerala’s outboard fishermen using ring seine experienced a sharp decline from Rs. 12,000 per fishing trip to Rs. 2500 during the period from 2014 to 2018. The period saw a drop of the sardine catch from 2.5 lakh (250,000) tonnes to 77,000 tonnes. Fishermen in this category lost 50 per cent of fishing efforts due to lesser availability of sardine, according to the study.

Charles George, an activist and the president of the Malsyathozhilali Aikya Vedi (Fishermen Unity Forum) calls the situation a "social and economic catastrophe," adding that the traditional fishing community in Kerala that is already marginalised socially and economically, is reeling under the impact of the climate-induced crisis. "Income of fishermen in the state, who depend on fishing for their daily needs, has drastically reduced over the past three years. People are forced to flee from fishing and find some other livelihood options to support their families," he says. He further demands a fish famine package to compensate their economic loss due to climate change and 'fish drought'.

Responding to a query on awareness of climate change, Basheer T K, a fisherman from Tanur in Kerala's Malappuram district says that climate change is a reality. "We are aware of this through our continuous interaction with the sea. According to our indigenous traditional knowledge we can see the sea has changed a lot. We could feel warming of the waters upon our venture into the sea. There have been drastic changes in ocean current and we could sense changes in the fish habitats," he says. We used to venture into the sea by picking up certain signs from the sea, wind, clouds, etc. But climate change has disrupted this way of fishing too, he adds. 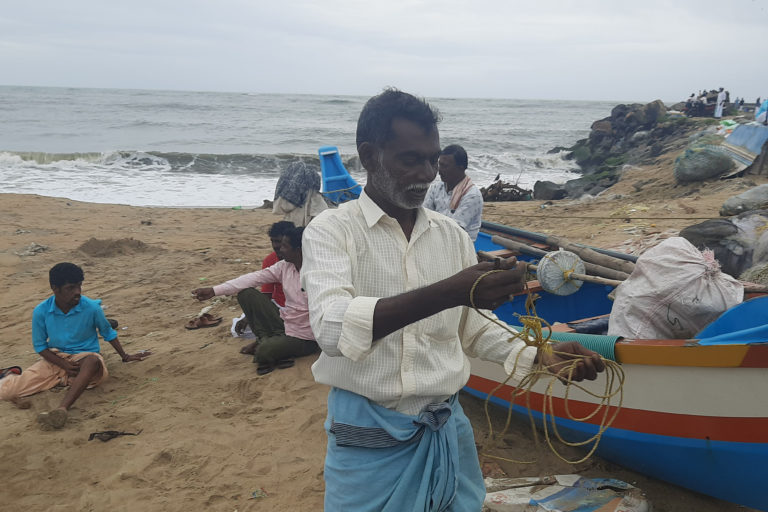 Storm surges, high waves, sea erosion and extreme weather conditions have put the lives of Kerala's coastal people in danger. Many coastal villages like Chellanam in Ernakulam district, Vizhinjam and Poonthura in Thiruvananthapuram district are increasingly becoming vulnerable to sea erosion which leaves many fisher families homeless more often. In May this year, hundreds of people residing in the coastal village of Chellanam were impacted when Cyclone Tauktae struck. Houses collapsed and a vast area along the coast, which extends to about 15 km, was flooded following storm waves. According to Sebastian D S, a fisherman residing at Chellanam, the sea is encroaching into their land each year. "This year the sea erosion is severe after the Cyclone Tauktae", he says. Livelihood issues apart, such incidents are posing threat to their life and coastal assets, putting their lives at peril.

At the same time, marine experts are of the view that storm surge will occur more frequently in the coming years. According to them, alarming winds by the cyclones help form storm surge in the waters which results in high waves, sea erosion and flooding in the coastal hamlet. 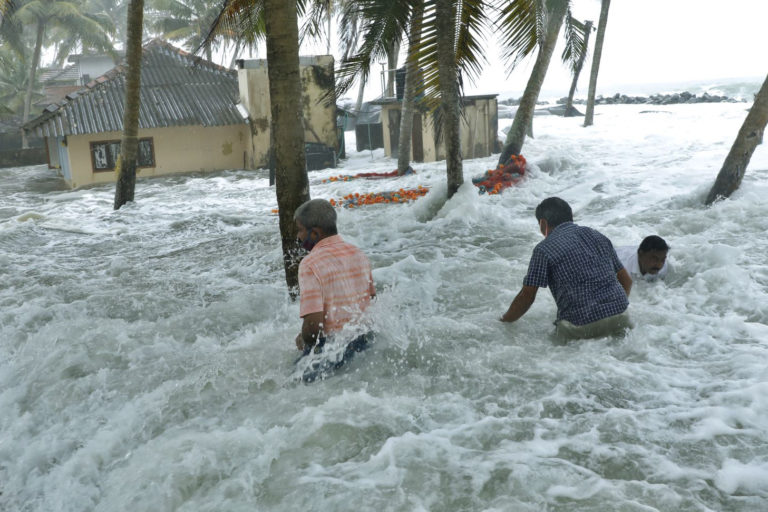 Another lurking issue faced by the fishers is the lack of proper social safety nets such as insurance coverage in the sector. A 2017 study carried out by Shinoj Parappurathu, Senior Scientist at CMFRI, Kochi shows that though accident risks of fishermen are covered, other risks such as vessel loss or damage and loss of other coastal assets due to natural disasters are covered only at a limited scale in India. "If suitable insurance schemes were available, the lives of the coastal people would not have become this pathetic. Their only livelihood option is at stake owing to climate change and related fallouts", says Parappurathu. He further states that the fishermen need to be equipped with on-board safety equipment to ensure disaster-proofing. Lack of advance warning system and means for two-way communication exacerbate the risk involved. Fishermen are pushed to bear the brunt of the natural calamity in the light that only 4.25% of fisher families have GPS and 0.67 per cent use wireless communication.

"ICAR-CMFRI is working for assessing the vulnerability of the marine fisheries sector in the future," says its Director, A Gopalakrishnan. "The institute has come up with a slew of adaptation strategies that include adoption of climate-friendly technologies or green practices, assurance of capacity building to make fishers climate-smart, development of knowledge base for climate change and marine fisheries and promotion of coastal aquaculture or cage fish farming. This is an outcome of a recent research project Impacts, Vulnerabilities and Adaptation Strategies for Marine Fisheries in India with the support of the Ministry of Environment, Forest and Climate Change. The predicted scenarios in different radiative changes will help the policy planners to go ahead with suitable plans to tide over the uncertainties," he remarks.