No welfare for social welfare workers

Abysmal pay, low dignity and zero benefits and security unite government-appointed social health activists from Punjab and UP at a protest meet in the capital. Amrita Nandy reveals some of their shocking tales of exploitation and deprivation.
22 April 2013 -

Amidst the high footfall at Jantar Mantar, Delhi’s protest hub, and the thousands of cracked feet, dusty slippers and grimy shoes it sees every day, the tiny, bare and soft feet of a ten-month-old baby stood out. On her fours, she looked for space to crawl but was jailed by the legs that surrounded her. In an intriguing way, her baffled expression reflected the helplessness of the women who were ringed around her.

Who were these hundreds of women? Why did they come all the way to the country’s Capital from distant hamlets? Meet the ASHAs (Accredited Social Health Activist) and mid-day meal workers – among the largest and fastest growing groups of working women in the country. Their repeated protests signify the ruthless attitude of the government towards lakhs of underpaid, overworked contractual workers.

"I have been an ASHA for the last seven years but I regret choosing this work. We are paid less than unskilled labourers but it is not just about the money"

One of the batches that demonstrated at Jantar Mantar was from Punjab – belonging to places like Bhatinda, Moga, Muktsar, Barnala, Gurdaspur, Amritsar, Taran Taran, Ropar and Mohali. Each woman had a story of her own, and it was striking how similar their stories were. As Paramjit Kaur Mann, 33, General Secretary of the ASHA Workers and Facilitators Union of Punjab, put it, “An ASHA worker in Punjab earns up to Rs 700 to 800 a month. This is neither the statutory minimum wage of Punjab - which is Rs 5,200 - nor a fixed amount, but a performance-based compensation. Now imagine how much they make her work for this measly sum. Each ASHA is supposed to attend to the needs of 1,000 people.”

A long, long list of tasks has been assigned to an ASHA. She is supposed to create awareness about health; maintain the village health register, health cards, immunisation cards; counsel people on healthy practices; coordinate with various village and block level authorities on health and sanitation issues; escort pregnant women to health centres for pre-natal and post-natal check-ups and deliveries; provide medical care for minor ailments; interact with self-help groups and attend community meetings, to name a few.

A few feet away, in a large tent that seemed small because of the hundreds seeking shade under it, were ASHA workers from Baghpat, Bulandshahar, Amroha, Ghaziabad and other parts of Uttar Pradesh. One of the protestors, Lakshmi, 31, a resident of Hapur, expressed her anger about the working conditions she has to put up with, “I have been an ASHA for the last seven years but I regret choosing this work. We are paid less than unskilled labourers but it is not just about the money. We have to accompany women in labour to hospitals at odd hours without any transport or allowance and we get screamed at by doctors and nurses who do not even give us a place to sit or a bathroom to use. There is no dignity, no system in place. Payments get delayed by months. Sometimes if the child is stillborn, they even deny us payment! Is the government helping us or exploiting us?” 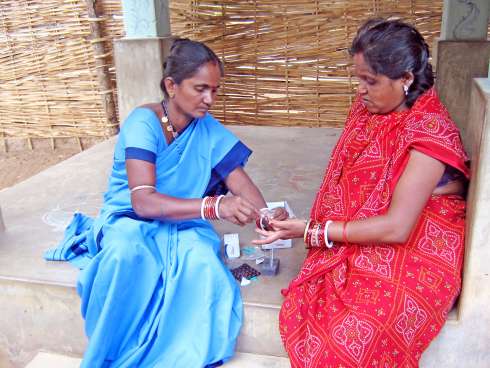 Despite the fact that ASHAs are supposed to be the first port of call for any health related demands at the village level, these women are among the most overworked and underpaid of government workers. (Credit: Sarada Lahangir/WFS)

Observed another worker from Punjab, “The work is disproportionate to our mandate and payment. We were even asked to handle the Rashtriya Swasthya Bima Yojana (National Health Insurance Scheme) cards and promised an incentive of two rupees per card. Those payments were never made. Then, we were asked to conduct a 1.5 month long survey on cancer’s prevalence in the state. It was an intensive survey - one needed to record the medical history of all members of a family. We resisted it but doctors and others in the medical community threatened us into silence by saying that they would have us fired.”

Anecdote after anecdote revealed the difficulties and oppression the ASHA experiences unlike the claims of being the ‘first port-of-call’ that she was envisioned to be as part of the National Rural Health Mission (NRHM) in 2005. During their Delhi protest, the ASHAs from two different states – overcoming language barriers – could piece together the realities of their working lives and agree on the need to fight for a better deal.

Mid-day meal workers fare no better. Hiring lakhs of contractual labourers implies little obligation for the government and a denial of statutory benefits to the worker, such as job security, an eight-hour work day, paid leave, travel and dearness allowance, bonuses, and so on. Employed as cooks for the mid-day meal scheme of the Sarva Sikhsha Abhiyan, run by the Ministry of Human Resource Development, it is thanks to the efforts of these women that the government can now claim there has been a 96 per cent hike in school enrolment in the age group 6-14 (Annual Status of Education Report Rural 2012). Yet, Lakhwinder Kaur, President, Mid-day Meal Workers Union of Punjab, an affiliate of the New Trade Union Initiative, described them as “grain that is pounded mercilessly”. Explained Lakhwinder, “In Punjab, a mid-day meal worker is paid Rs 1,200 for cooking and cleaning seven days a week, whereas in Chandigarh they get Rs 1,900 for the same job. Both rates are less than the state’s minimum wage.” 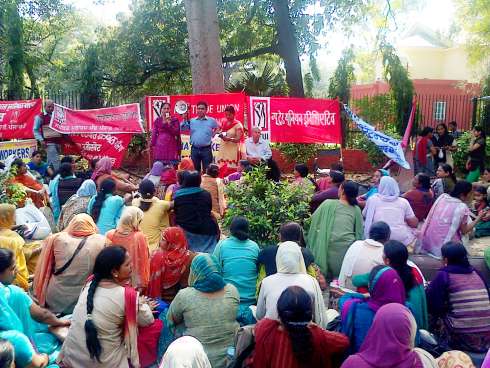 The experiences related told a story of great exploitation. If there is no water in the school for cooking, these workers are made to lug it from their own homes! In Muktsar, a young cook was fired from her job because she had taken leave to deliver a child. A woman in Faridkot suffered 90 per cent burns while cooking at the school, but the government did not pay a paisa towards her treatment which cost nearly Rs 60,000. Years after the accident, she is still not totally cured. To cover accidents of this kind, Lakhwinder and her colleagues are demanding an insurance cover of Rs 2 lakh per worker, among other benefits.

It is a truism that globalisation has pushed a large number of women into the unorganised sector where there is no social security to speak of, nor fair working conditions. It is also well-known that the government is the largest employer of female contractual workers who are paid modest honorariums dependent on the various “flagship” schemes promoted as social welfare initiatives. But surely there is an irony here when interventions meant to lift people out of poverty end up impoverishing the very workforce that keeps them going? Can there be a more glaring example of the government’s apathy towards these poor “project workers” than to know that they have even been left out of the ambit of the Protection of Women against Sexual Harassment Bill 2010? The vulnerability to sexual assaults and violence faced by such women workers is only too obvious.

Having protested yet again in Delhi and submitted yet another memorandum demanding regularisation of work, dignity and labour benefits, the women from Punjab ask for directions to a gurudwara nearby. Prayers, it seemed, were their last hope, as they prepared to spend another sleepless night on the floor taking them back to their “jobs” back home.   (© Women's Feature Service)

Amrita Nandy is a social activist and journalist.