Even as the country grapples with creating more employment opportunities for its population,  it is imperative that it doesn't leave its women behind. Too many who want to work are not working, and growth alone will not change that, writes Shikha Sharma.

Globally, rapid economic growth, falling fertility rates and higher educational attainment has often translated to an increasing number of women joining the workforce. This is not the case with India. Here, women's participation in the labour market is barely one-fifth, with four out of five women over the age of 15 neither working nor seeking work. Only nine countries - Yemen, Iraq, Jordan, Syria, Algeria, Iran, Somalia, Morocco, Egypt - have fewer proportions of working women. No matter which group of countries India compares itself  with - high income or low income, highly indebted or least developed - it comes off badly.

This development  is not sudden. The country's Female Labour Force Participation Rate (FLFPR)  -  the share of working-age women who report either being employed, or being available for work - has  been on a decline for decades. It peaked at 33 per cent in the seventies, before declining to 30.3 per cent in the nineties. In 2019, it fell to 20.7 per cent, according to the World Bank, representing one of the worst gender gaps in the world.

What's more, even though women's labour participation rate is very low at less than 11 per cent compared to 71 per cent for men, women face a much higher unemployment rate (17 per cent) compared to men (six per cent).

What the data says

The sharp fall in Work Participation Rates (WPR) has in the last few years come from rural areas, where it  has crashed by seven percentage points from 24.8 per cent to 17.5 per cent -  an absolute drop of close to 25 million rural women workers since 2011-12 (and a drop of 47 million rural women workers since 2004-05). With 60 per cent of working women in India employed in agriculture, experts point at the lack of  sufficient non-farm jobs in rural areas as a likely  reason for this.

Even with urban FLFPR  remaining stagnant - a development worrying in itself -  data shows that the unemployment rate amongst urban women too has substantially increased from 5 per cent in 2011-12 to 10.8 per cent in 2017-18.  The stagnant jobs market and rising unemployment - aggravated by the pandemic - has worsened the situation further. Women accounted for 10.7 per cent of the workforce in 2019-20 but they suffered 13.9 per cent of the job losses in April 2020, according to a study by CMIE.

As per the Periodic Labour Force Survey data, the decline in participation is evident across all age groups with LFPR for women aged 15-29 having fallen by eight percentage points to 16.4 per cent. Subsequently, it has declined  by at least seven percentage points for every age bracket between 30-50, with more than two in three women in the age bracket of 30-50 reporting 'attending to domestic duties' instead.  The steepest decline can be witnessed among women in the 30-39 year bracket, where LFPR has fallen by 9 percentage points to 33.5 per cent.

When women do work in India -  data suggests that they tend to earn less,  work in less productive jobs without job or social security, and are over-represented in unpaid family work and other forms of vulnerable work. The high-skilled, white collar jobs that young women desire are difficult to come by. Instead, women's labour is focussed around jobs like domestic work, house cleaning and sales in the urban sector, and agriculture in rural areas. The only exception is the teaching profession, which makes it to the top 10 most common jobs for women.

An interplay of reasons -  both economic and cultural - are  behind women's low participation in the workforce. Some of it can be explained by higher education enrollment, indicating that more young women are studying than working or looking for jobs. That, however, only explains a part of the story.

Across countries, researchers have observed a 'U-shaped relationship' between female incomes and their labour participation rates. At low levels of the income stream, women tend to work in large numbers. But as incomes increase, women tend to withdraw from the labour force due to personal preferences, social and household pressures, or the inadequacy of suitable employment opportunities . As incomes and education increase further, the participation rate rises again, as lucrative opportunities present themselves.India presently finds itself at the bottom of this curve, with women who have little or no education and those with tertiary education displaying the highest rates of labour participation.

What still remains striking though is how few women work in India even compared to countries with a similar level of per capita income. Data also reveals that despite increases in primary and secondary education, women have been systemically losing out on opportunities in fast growing sectors like services and manufacturing, due to an increasing demand for technically skilled labour, where men fare better on account of having higher tertiary and vocational training levels. A large degree of gender-based occupational segregation still continues to persist in India, with less than 19 per cent of new employment opportunities generated in India's 10 fastest growing occupations being taken up by women.

Increased mechanization in traditionally labour intensive sectors, like agriculture, manufacturing, and mining, along with a general thrust towards automation means that women have been further pushed to the wall. 12 million women are likely to lose their jobs due to automation in agriculture, forestry, and other allied sectors in India by 2030, according to studies. Economic growth, in short, has not generated adequate or desirable jobs for women.

Not that there are too many jobs in the market to begin with. Even as the GDP grows, the ability of the Indian economy to absorb the growing working-age population has been steadily decreasing, a trend termed "jobless growth." The persistent unemployment crisis has no doubt affected both women and men, but the structural shift away from agricultural employment over the last few years and the lack of opportunities in non-farm jobs in rural areas and white collar ones in urban areas has meant that women are more disproportionately affected by this development. 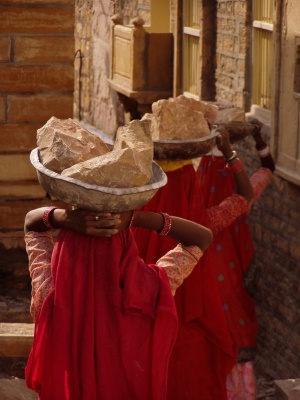 For women with moderate levels of education, some experts say that it is not so much the lack of adequate jobs ( even though those are on a decline too), but their exclusion from them that explains the low rates of labor force participation for moderately educated women. This segregation of gender specific activities, and perception of women being 'secondary' wage earners not only translates to lack of family support for women's careers, but also sticky wage differentials with the result that women in India are paid 34 per cent less than men for the same job with the same qualifications.

Cultural expectations and social norms surrounding work are also holding women back. Indian women are often required to prioritize domestic work and child rearing duties, particularly if they are married. According to studies, married women also have lower LFPRs, and amongst rural women, the largest declines in LFPR over the 1993-2018 period were observed in the below 34-year, child-bearing age categories. Over 90 per cent of women who did not work reported that they were primarily engaged in domestic duties, as per National Sample Survey 2011-12. In addition, a lack of enabling factors such as flexible work arrangements, institutional support for child care like maternity leaves and creches, risk of violence and sexual assault at the workplace actively contribute to women's exodus from the workforce.

The under-representation of women in the workforce is both a social and economic loss. According to a report by McKinsey Global Institute,India has the potential to contribute $770 billion to the global GDP – one-third of the additional GDP required for a $5 trillion Indian economy -  with more gender diversity in the workforce.

An overwhelming body of research also now points at the impact employment has on boosting women's agency and voice. When more women join the workforce, they help make cities more productive and contribute to increased median wages for both men and women.  Studies also link women's employment to increased bargaining and decision-making power in the household, delays in the age of marriage and first childbirth, and an increase in overall well being of children in the house. If India's growth fails to draw it's women in, these empowerment effects will likely also not materialise.

The good news is that despite the social and economic constraints, women in India do want to work. When questioned, more than 30 per cent of women engaged primarily in domestic activities expressed a willingness to work. " If all these women who stated they would take work actually did, we would see a 21 percentage point rise in the female labor force participation rate," the authors of the study note.

What can be done

To reap the gender dividend, India needs to bolster women's economic participation by not only creating new jobs for women, but skilling them and giving them greater access to existing ones. This could mean employing an additional or alternate, more female-intensive, export oriented growth strategy - like the one many East Asian economies as well as neighbouring Bangladesh is pursuing - to increase employment opportunities for women in the middle of the education distribution.

It could also  involve implementing policies aimed at reducing occupational segregation, promoting acceptability of female employment beyond traditional job roles and into those that allow for greater compatibility of female employment with domestic responsibilities. Dedicated efforts to skill and re-skill women, as well as to enhance their educational attainment beyond secondary schooling, will also be needed.

Ultimately though, any lasting change will require a change in values and attitudes towards female employment.  It is only through sustained effort that India can bridge its gender gap and ensure equitable distribution of work. The Indian experience seems to suggest that the country can't just depend on economic growth to get women into the workforce. It must actively seek  the right kind of growth - one that is gender-inclusive in terms of job opportunities.

Shikha Sharma is a freelance journalist and photographer; she writes about policy, culture and social justice issues across a number of topics, including women's rights. This article is made possible through reader support for India Together's development journalism fellowships.

CMIE: No recovery in urban FLPR after lockdown

Niti Aayog: Decline in Rural labour force participation in India: A relook into the causes

The Indian Journal Of Labour Economics: Structural changes and quality of women’s labour in India

ILO research paper no 10: Why is female labour force participation declining so rapidly in India?

Livemint:Upto 12 mn women may lose their jobs to automation by 2030:study

Harvard Kennedy School Working Paper No. RWP18-004:Women and work in India - descriptive evidence and a review of potential policies