Badaun cleans up its act

The Badaun district administration in UP is on a war-footing to convert all dry toilets and rehabilitate manual scavengers before the end of the year. Over the last few months 1600 scavengers have been rehabilitated. Sumita Thapar reports.
30 October 2010 -

Badaun, UP - Visiting rural Badaun is like being transported into some other century: Horsecarts being used as a commons means of transport; the odd bhishti (water carrier) seen carrying water in a goatskin bag; and worst of all  dry toilets and manual scavenging.

Although legally the practice of cleaning dry latrines and transporting human excreta has been banned in India since 1993, the practice continues in some parts of the country. In Badaun in western Uttar Pradesh, a survey done by the district administration this July showed 60,000 dry latrines were still being used in the district. These were manually cleaned by scavengers  most of whom are women  and regarded as untouchables. 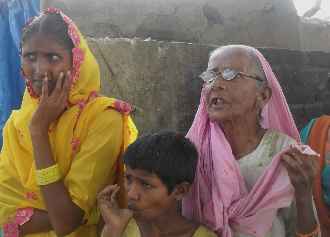 One large family of 24 people has built 3 WCs connected to one single larger than usual pit. Sapikan, 70, labourer, says water required to flush is taken from a handpump close by. Key advantage: No flies, no smell. Pic: Sumita Thapar.

Over the last three months the district administration has made massive efforts to convert all dry toilets to pour-and-flush  a simple technology that involves connecting the seat to a soak pit using pipelines. The soak pit  which is about 1m deep and 1m in diameter  collects the sewage and can be used by a family of five for about five years. During this time the sewage turns to manure, and another similar pit is dug close to the first for the familys use.

In Uttar Pradesh, 67% households have no toilet facilities with the figure going up to 84% in rural areas. In Badaun, since July this year, funds to the tune of Rs 5 crores have been released under the Total Sanitation Campaign  the Governments flagship programme  to convert 35,000 dry latrines. Of these, 16,000 are ready and the rest under construction. The target is to convert the remaining 25,000 before the end of the year. District Magistrate Amit Guptas leadership and commitment has been enormous.

R S Chaudhuri, District Panchayati Raj Officer, Badaun, who has played a critical role in the programme explains that the drive gave conversion of dry toilets priority over construction of new ones. This is because proximity of the latrine to the living area causes serious health hazards. Intense community mobilisation efforts were made to raise awareness on issues of faecal contamination with food and drinking water. Community meetings, and involvement of local leaders went a long way in changing mindsets.

Over the last few months 1600 scavengers have been rehabilitated through benefits under various government schemes such as BPL card, NREGA, pension schemes etc.

•  Change in inhuman tradition
•  No end to manual scavenging?

The family is given Rs 1,500 to construct the latrine. Ask Chaudhuri what is the most difficult part of community mobilization and he says to win over the first household. Once the first family starts digging its pit, the rest follow. In fact, given that sanitation practices of a household affect the entire neighbourhood  stench, flies etc  community pressure towards change builds on its own.

Badaun is one of the hotspot districts for polio eradication: Of the 66 blocks in Uttar Pradesh identified as high-risk for polio, 16 lie here. Says Amit Mehrotra, water and sanitation specialist, UNICEF: Since polio spreads through the faeco-oral route, it is important to prevent drinking water contamination with faecal matter and end open defecation. Safe disposal of faeces  which means that no one should be able to touch, see or smell it  is critical. Since all of this happens in a dry latrines, converting these are an urgent priority.

In Ramzanpur village in Kader Chowk, one of the districts high-risk blocks, 1200 of the 1500 households were identified as having dry latrines. Of these, 710 have been converted to pour-and-flush over the last three months. Construction for the rest is underway and should be completed by the end of the year. New users say they are happy with the result: No dependence on scavenger, no foul smell, no flies, clean surroundings and better health for their families. 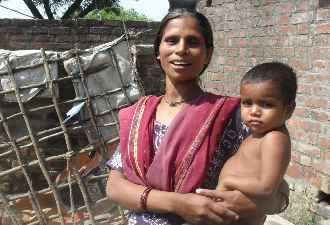 Babli, 35, got the toilet made 2 months ago. Her husband is a labourer, she has 6 children ages 2-14. Main advantage: We can clean it ourself, we dont have to depend on the cleaner. Pic: Sumita Thapar.

Another strategy used is to give alternate jobs to the scavengers. Clearly, once this labour is not available, people will be forced to convert their toilets. Most scavengers are women who live in a basti on the outskirts of the village. Men in the community do no work, alcoholism and domestic violence among them is high. While the women would like to move on to other jobs, social pressure on them is high as other communities dont allow them alternate livelihood opportunities such as daily wage labour or setting up petty shops.

Says Chaudhuri: It is important that rehabilitation and alternate livelihood for scavengers go together with community mobilisation among general community. Over the last few months 1600 scavengers have been rehabilitated through benefits under various government schemes such as BPL card, NREGA, pension schemes etc. In addition, they are being given Rs 2,200 to construct the pour-and-flush toilet in their home so that they do not have to go out for open defecation. The scavengers fear hostility from other social groups, and hence welcome this facility.

The winds of change are strong and hopefully, finally, the inhuman practice of manual scavenging is close to an end.

Sumita Thapar worked in western Uttar Pradesh on polio as a media consultant for UNICEF. Earlier this month she visited rural Badaun.