The way we measure hate crimes is simply bogus

Safety and criminality in society must be assessed directly from the people themselves. The government is deluding itself and citizens by conflating law enforcement statistics with crime data, writes Tara Krishnaswamy.
03 July 2018 -

Thomson Reuters Foundation recently proclaimed that, as of 2018, India is the world’s most dangerous country for women, based on a perception poll of select respondents. Meanwhile, a casual scan of recent crime news against Scheduled Castes (SCs) and Scheduled Tribes (STs) reveals many gory incidents across the country. A thrashing in Maharastra, an assault in Gujarat, butchering in Tamil Nadu, and sexual harassment cases in Telengana. Are crime rates against women and SC/STs worsening in India?

To answer this, we need authentic measurements of crime. Typically, the National Crime Records Bureau (NCRB) publishes annual statistics of various categories of crime in India and the states. Unfortunately its data is incomplete, inconsistent, and an incorrect determinant of crime rates in society. Here is why.

Crimes against SC/STs are recorded per the Indian Penal Code (IPC) under the Prevention of Atrocities (POA) Act. Crimes against women are recorded against numerous and unrelated IPC categories pertaining to dowry, trafficking, sexual harassment, rape etc. The NCRB simplistically aggregates records of state police, as well as other law enforcement and intelligence agencies as crime metrics. 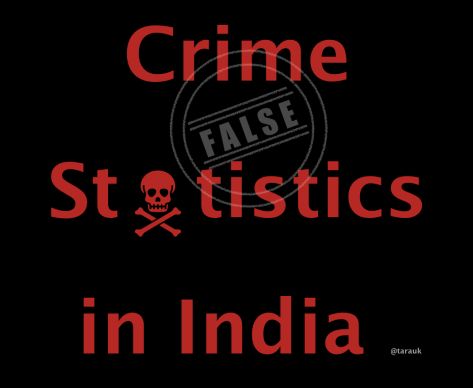 In other democracies, certain crimes are classified as hate crimes. The US, UK, Canada, Australia and others have special legislations against hate crimes as a class. This is to distinguish between, say, snatching a woman's purse and molesting a woman. The latter is a hate crime as it targets her because of her gender identity. Hate crimes are those motivated by hostility and prejudice of perpetrators against victims just because they belong to a certain group - race, ethnicity, caste, religion, sexual orientation or gender. Such crimes may be of any level of aggravation, verbal or physical, but they send a message to the broader group which is perceived as belonging to that identity.

Shamefully, India has a variety of hate crimes. Communal crimes against Muslims, Hindus and others, crimes against specific non-SC/ST groups, like torching a hamlet inhabited by people of a certain caste or religion, and racially motivated crimes against people of North Eastern origin. The list also includes targeting people of certain sexual orientation for their choices, transgenders for just being themselves, women, and of course, entrenched violence against SCs and STs.

While there is the POA and specific, disparate laws against hate speech and actions that promote enmity between groups, there is not a category called hate crimes to encompass the spectrum, nor comprehensive criteria to apply these rigorously. In fact, it is apparent that the NCRB data does not even reflect the true extent of atrocities against SCs and STs. All that the law enforcement-derived data shows is police performance: crimes that the authorities documented and processed. No societal baseline!

Is the incidence of crimes in society equal to police record? No. Police data is certainly a subset of it, but does not encompass all crimes that occur in a society. Hate crimes, rapes, etc. are particularly under-reported in most societies for the very reason that they are vulgar, violent, intended to intimidate, persecute and silence. Many victims do not file formal reports for these reasons, in addition to social stigma, language barriers and their lack of faith in the justice system.

Stepping into a police station is an intrepid act for anyone who has witnessed, or been subject to any degree of crime, even the most grievous. Women being groped on a city bus, or casual caste discrimination in a school or college, is an everyday occurrence that rarely reaches the police's doorstep. Further, the very bias in society that causes hate crimes is also reflected in the police force. After all, the force is a mirror of society, and crimes may go unregistered or misrepresented even if the complainant comes forward.

There is plenty of anecdotal and empirical evidence to confirm this: routine refusal to file FIRs based on who is raped (immigrant, SC/ST etc.), as well as not filing assault cases against minors under the Protection of Children from Sexual Offences (POCSO) Act. There is even a term for deliberate under-registration of cases - 'burking' of crime. The Women and Child Departments (WCD) and Social Welfare Departments (SWD) interfaces, helplines of the states and NGOs, and even doctors and hospitals receive calls and complaints, and handle cases from affected parties that never make it to police records. NGOs working with victims of violence attest that in many instances, the victims themselves cannot and will not record the crime.

In fact, an independent survey by IDFC institute on Safety Trends and Reporting of Crime presents hard evidence that barely 6-8.5% of theft is reported to the police in large cities, and more than 90% remains unreported. Theft is not even a hate crime, there is no attached social stigma or fear of persecution. Other studies show that police records - and hence NCRB data - are orders of magnitude variant even for road accidents.

It is clear that the state of crimes in society cannot and should not be derived solely from police records. Even more so for hate crimes, reporting of which, places an extraordinary burden on the already socially marginalised victims. Instead, it is the state's responsibility to accurately measure the true state of crime in society so as to be able to frame policies and solutions to address them.

Way back in 1967, Lyndon B. Johnson the 36th President of the United States recognised this in his historic Congressional address, "We cannot limit our efforts to enemies we can see," he said, referring to the scant crimes that receive publicity or police recording, while manifold go unnoticed. His commission, the President's Commission on Law Enforcement and Administration of Justice, changed the face of crime control, its measurement, law and order, and justice. One major change was the introduction of what is now called the National Crime Victimisation Survey (NCVS); direct social surveys of crime victimisation. By now, every major democracy runs societal surveys as one parameter in estimating crime. Still, six decades later, India has not even begun to acknowledge that crime is not even tracked, leave alone addressed.

What needs to be done to accurately assess the state of crime in society is for data to be converged from multiple sources. Collected not only from law enforcement records but augmented through all government agencies that have interfaces with victims. The SWD, WCD, Minority Affairs, government helplines, hospital and rehabilitation admissions etc. Most importantly, governments must commission surveys of people directly, not through the state apparatus, and have that tallied with independent surveys, and the differences reconciled.

It is clear that the NCRB approach is deeply flawed. Beyond drawing only from law enforcement records, inconsistent measurements and incorrect classifications of data make year over year comparisons meaningless, and in some cases erroneous. It is unclear whether atrocities against specific communities, castes, gender etc. are increasing or not; we simply have no clue of the true rate of crime in India. It could be just a few percent point or orders of magnitude variant from the NCRB data. Who is to say? Nevertheless, both policy making and mainstream media reporting is almost entirely derived from NCRB.

No improvement for a safer and freer India is possible without assessing safety and criminality in society directly from the people themselves. The government is deluding itself and citizens by conflating law enforcement statistics with crime data. Evidence based policy making is a distant dream in this scenario; it is only what is measured that gets tackled.

The author is an activist with #CitizensForBengaluru and a political commentator.