Has bamboo's time arrived? The high cost of inputs going into conventional construction is beginning to push more people in the direction of alternatives, and this was topic of a recent seminar at the Indian Institute of Management, Bangalore. Ashwin Mahesh has more.
07 January 2008 -

"You have to go about seeking efficiency in a way that projects are marked not merely by good natural resource management, but also by innovation in either product process, or in the way that you offer tangible benefits to your customer," says C Hariharan, CEO of Biodiversity Conservation (India) Limited (BCIL). Hariharan, an architect and a property developer I use the word advisedly, given how perjorative 'developer' has become in this city - was speaking at a recently held seminar on "Bamboo in the Building Industry: Prospects and Potential" at the Indian Institute of Management, Bangalore (Full disclosure: I moderated the discussion at the event).

"This means costs cannot be addressed as a one-dimensional challenge, but in light of other factors too - aesthetics, function, ease of execution, environmental sustainability, and time," says Hariharan. His argument goes beyond showing how to weave money-saving into a range of other considerations. Instead, as he tells it, 'alternate' construction that shies away from conventional brick and mortar is actually cheaper and more appropriate in many cases. So, it ought to be possible to pitch economic value to potential consumers, and in addition inspire them with ecologically sensible choices and creative design. 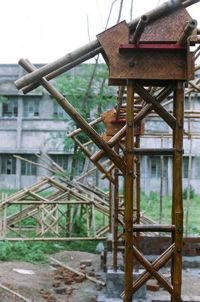 Moreover, in his narrative, community-building seems perfectly comfortable co-existing alongside the individualism that appears to drive so much consumption today. Hariharan says communities can strive for autonomy from external providers of many services, something that many Bangaloreans might aspire to given the iffy state of public utilities in the city. He speaks of six strands of sustainability - Earth, Energy, Water, Waste, Air and Vegetation - that any project can aim for. Listening to him makes you imagine communities with such integrity and autonomy, and hoping that you too might inhabit one of them one day; BCIL says it is developing such communities.

Bamboo - the potential and promise

While Hariharan's talk set the conversation amidst a larger canvas, the immediate focus of the gathering was on bamboo, specifically. Hariharan's talk was followed by a presentation from the well-known architect G R Jaigopal, recently the winner of the 2007 International Bamboo Building Design Competition in the 'Urban Buildings' category. Jaigopal took the audience through an impressive array of slides showing the construction of his office in Kochi, pointing to various technical choices made at different stages of construction. Built in 2002, this building uses 70-80 per cent less steel than a typical building like it, and makes wide use of bamboo. It also includes a rainwater catchment pond, and an anaerobic natural wastewater treatment system.

The successes of Hariharan and Jaigopal naturally raised the question: is there some reason why bamboo-based construction should not capture a larger chunk of the building industry than it now has? Many participants were no doubt keen to see that happen, and Jaigopal believed it was eminently doable. He argued that even large-scale projects were not necessarily outside the competence of 'alternate' construction. A few architects and entrepreneurs specialising in bamboo, for example, could pitch together for a large-scale project such as the upcoming construction of a posh hotel in the city. Doing so, he said, would also be a kind of advocacy for more bamboo-based construction, in turn leading to more opportunities.

Has bamboo's time arrived? Crude oil is selling at $100 a barrel on world markets, and virtually every significant component of conventional buildings requires huge inputs of oil for its production. Bamboo is abundant in India, fast-growing and self-replenishing. Maybe now, the economics of conventional construction will force more people to look at alternatives, and bamboo can become financially attractive too.

An important bottleneck that needs to be overcome is in the supply of suitably processed bamboo for various projects.

Vaibhav Kaley, whose company Wonder Grass organised the seminar, agrees. Kaley, himself the son of the legendary Vinoo Kaley - who was known as the Bamboo Man - says that he has a number of people asking whether their construction projects can be executed with bamboo, and he tells them that besides being distinctive, their buildings could end up being cheaper too. Structures that need to be renovated periodically, like buildings in holiday villages and resorts, are especially suitable for construction with bamboo, because refurbishing them would be so much cheaper than knocking down brick-and-mortar buildings and rebuilding them.

An important bottleneck that needs to be overcome is in the supply of suitably processed bamboo for various projects. The National Mission on Bamboo Applications (NMBA), a technology mission of the Department of Science and Technology, itself acknowledges that despite wide-spread availability of bamboo, it is difficult for product developers to source sufficient stocks at reasonable prices, and to find convenient processing centres for stocks when they are available. While the establishment costs of processing units are only a few lakh rupees, there are only a dozen or so such units in the country creating finished products. The supply chain for providing bamboo to these processing centres needs to be seamlessly linked to its consumption in construction projects, says Kaley, who is himself sourcing bamboo from two centres, one each in Maharashtra and Kerala. If the logistics improve, then a lot more people can use the steely grass for a much wider range of applications.

How does an entrepreneur go about tapping the emerging opportunity in bamboo? Should he try to build modular pieces (walls, doors, floors, etc) that can be used in a number of different projects, or should he offer fully-constructed buildings that use alternate material inputs wherever suitable. The former approach, says Hariharan, may work better for small entrepreneurs who do not have the capital needed to execute projects on their own. But he agrees that communities like the one he is building can have fantastic catalytic effects, because they are permanent standing evidence of the potential of alternate construction, and thus obtain a lot of mind-space among future buyers.

Particularly encouraging for budding entrepreneurs is the fact that a fair bit of government subsidy and support is available. NMBA develops machinery and process technologies, and also does research on construction applications. One of its focus areas is supporting small-scale enterprises engaged in bamboo applications. The Composites Technology Park at Kengeri, southwest of Bangalore, has developed a number of processing capabilities, and is encouraging entrepreneurs to use its facilities for trial runs of their business ideas. The director, Dr R Gopalan said an impressive range of capabilities has been developed in India, comparable to those in advanced countries.

A number of participants at the seminar endorsed the idea of establishing a private-sector organisation to bring together various capabilities, and to facilitate faster adoption of bamboo in construction and other projects. A 'NASSCOM-like' body is needed, they said, referring to the software industry's lobbying arm, the National Association of Software Services Companies, which has had a strong influence on government policies and incentives in that sector. One possible focus for such an organisation may also be the establishment of a building code for bamboo-based construction in India. While some aspects of bamboo use in construction have been benchmarked, there is still a need for a comprehensive code, without which project developers will hesitate to adopt bamboo widely, says Kaley.