Women born into a Bedia family remain unmarried. They engage in prostitution in order to provide for the economic needs of their natal family. And Bedia men have developed a strong resistance to any change in their mode of living, writes Anuja Agrawal.
24 January 2008 -

Engagement of women in prostitution with familial consent is widespread among some of the erstwhile nomadic groups such as the Bedia, Nat, Sansi, Kanjar, and Bachada found in north, northwestern, and central India. In north India, the Bedias are the best known for pursuing prostitution as a familial occupation.

Women born into a Bedia family remain unmarried. They engage in prostitution in order to provide for the economic needs of their natal family. Bedia brothers, that is, the men, although not economically productive, do marry. The wives of the Bedia men do not engage in prostitution. But they are largely responsible for all the domestic work including cooking, washing, cleaning, and childcare.

It is interesting that members of the Bedia community resort to starkly contradictory representations of the prostitution of their women. They vacillate between two extremes. The weight of tradition on the one hand, and the "choice" of individual women on the other. A middle-aged wife said, "This is going on for many generations. We don't even know. It has been going on from the times of our ancestors." But she added a little later that "earlier no one knew this occupation". 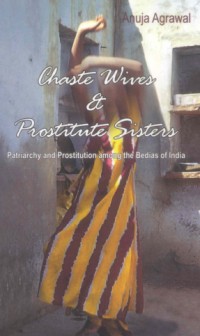 The Bedias' situation departs considerably from the 'man the breadwinner, woman the home-keeper' model. The economy of the Bedias, insofar as it is dependent on prostitution, is sustained at two levels by women's labour. The Bedia men on the other hand are the most parasitic members of their family.

•  The silence around sex work

On another occasion, she explained to me, "Earlier we used to do like this: Sometimes we would camp in one village sometimes in another. We used to beg and survive. Then one ancestor of ours started this tradition. He put his daughter into this 'dhanda'. He even set out all the rules of the trade. And ever since then, this has been going on in the community."

In yet another conversation, the same woman said: "Our ancestors started it". But her sister-in-law quipped in: "No, it was not really the old people/ancestors. Sisters and daughters started this of their own will".

A crucial feature of the Bedia families dependent upon the prostitution of their women is that women do all the well-defined work within and outside the household. The wives of Bedia men generally accomplish all the domestic work. A wife cooks, cleans, washes, and takes care of all the members of the household including her sisters-in-law and any children that the latter may have. In areas where the Bedia women migrate in order to engage in sex work, their children are often left behind and brought up by their mothers or brothers' wives. The domestic labour of a wife in her husband's household frees the unmarried Bedia sisters and daughters to engage in sex work. The needs of a cash income are fulfilled by the prostitution of unmarried women or the non-kin women kept for this purpose within a Bedia family.

In sharp contrast, Bedia men do not engage in any kind of wage or even non-wage work for the major part of their lives. While the community members do own some land, the young Bedia men do not participate in its cultivation although some of the older men do so intermittently. Families owning some cultivable land employ wage workers from other castes/communities for agricultural work during the harvesting season. In some families, the land has been let out to sharecroppers despite the availability of labour within the family. Bedia men sometimes participate in domestic chores. Under some conditions, the men may engage in some gainful activities such as agriculture, rickshaw pulling, or some other work involving manual labour. But they barely ever do so consistently and in no case are they primarily responsible for the sustenance of their family.

The Bedias' situation departs considerably from the 'man the breadwinner, woman the home-keeper' model. The economy of the Bedias, insofar as it is dependent on prostitution, is sustained at two levels by women's labour. The Bedia men on the other hand are the most parasitic members of their family.

It is hardly surprising that the community members draw a clear correlation between men's inactivity and their increasing dependence upon prostitution. It is extremely difficult to have a precise estimation of income from prostitution; the women generally work with a daily target of earning a certain amount through entertaining an approximate number of clients.

Accordingly, they tend to calculate both earnings and expenditure on a daily basis. The situation changes somewhat with the migration of women who remit earnings more or less regularly. The Bedias in Nagla admitted that a fixed amount comes from Mumbai where many Bedia young women had migrated in recent years.

In 1999-2000, most Bedia women maintained that they do not accept anything less than Rs.50 from any of their customers for a single visit. This minimum figure had been raised to Rs 100 by 2002.

Women also said that the "rate" depends upon their perception of the paying capacity of the customer. In fact, Rs 100 is said to be the rate for a sadak-chaap (run-of-the-mill) customer while a man who seems better off can even be asked to cough up Rs 500. Westerners and other foreigners are welcomed for their "dollars" and generally higher paying capacity. Even the curiosity value of the hamlet sometimes earns the community members gifts in money and kind (soap, shampoos, lipsticks, ball-pens, etc.) from passing foreign tourists.

The earnings in Mumbai are much higher than Nagla or even Delhi brothels. One girl can easily earn anything between Rs 2,000 to 3,000 in a night's work.

The women also claimed that the chances of their finding a stable, reliable, and wealthy patron were much better in Mumbai than elsewhere. Such men often provided the women with living accommodation worth Rs 700,000-800,000, gave them Rs 20,000-30,000 toward their monthly expenses and did not hesitate in parting with another 50,000-100,000 if the women asked them to do so for any special occasion.

Now, it is undeniable that all Bedia women cannot earn in such high figures. But the significance of the "possibility" of this kind of income can barely be underestimated.

The most likely employment options of Bedia men are as agricultural workers, workers in the informal sector, or in petty business keeping. The income possibilities from occupations that are the most likely economic options for the Bedia men are far inferior as compared to possibilities offered by prostitution. While the income possibilities from both unskilled and semi-skilled occupations range from anything between Rs 25 and 250 per day, the usual daily income is likely to be in the bracket of 75 to 150. The Bedia women expect to earn anything between four to 10 times this figure, if not even more.

Bedia men have developed a strong resistance to any change in their mode of living.

There is also much that the community does to redress the feeling of incapacity that the men might have. Just as small children are made to feel important about little things they do, so are Bedia men treated. For many of the married men with grown-up children, "shopping in the city" is mentioned as foremost among the activities. Similarly, irrigating the fields occasionally or getting fuel-wood from the forest are all bestowed with a disproportionate importance. Men's visits to the local courts to deal with the police cases registered against their sisters are also treated as "work." Thus, even though most Bedia men do not contribute much to their family economy, they are not necessarily allowed to confront this fact on a day-to-day basis.

The security of living in a more or less comfortable home with no responsibility is not something Bedia men are willing to easily give up. (Women's Feature Service)

Anuja Agrawal is Reader in the Department of Sociology, University of Delhi. This article is extracted from "Chaste Wives and Prostitute Sisters - Patriarchy and Prostitution Among the Bedias of India" by Anuja Agrawal; Published by Routledge; Price: Rs.650; Pp: 251.