It has been known informally for long. But recently, animal nutrition scientists announced that areca leaf sheath fodder can replace paddy straw. This is timely, since paddy straw supply has been declining, notes Shrikrishna D.

Scarcity and subsequent steep increase in fodder prices coupled with acute labour shortage is resulting in dwindling milk production in many Indian states.

In Dakshina Kannada and Uttara Kannada districts of coastal Karnataka, paddy straw is the main dry fodder used for cows. It has to come from 200 kilometers away. As paddy production is decreasing, this fodder is decreasing too. This results in many small farmers reducing their cattle number or bidding good-bye to animal husbandry.

Even as fodder supply has started declining, it is not as if farmers have had no alternatives. Coastal Karnataka has large areca nut (betel nut) plantations. Areca leaf sheath has been used as supplementary fodder by farmers since decades. But no one was very confidant about its merits and demerits.

Areca leaf fodder is naturally advantageous to farmers. First, it is locally available within the fence of each farmers gardens. Second, it lacks the pesticide residue the paddy straw brings along that creates health problems for cows. 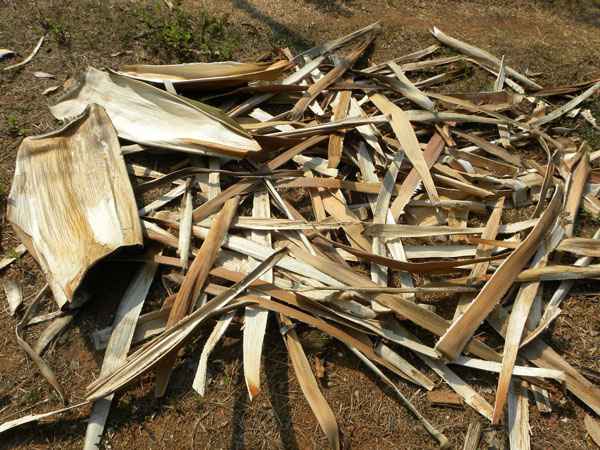 This is how shredded betel nut leaves were fed earlier. Pic: Shree Padre.

Recently, animal nutrition scientists have studied areca leaf sheath fodder in detail and have announced that it can replace paddy straw. The National Institute for Animal Nutrition and Physiology (NIANP), Bangalore, has conducted studies about this under its Principal Scientist Dr N K S Gowdas leadership. They have brought out publicity material on this as well. An experimental processing unit has been started in a Karnataka village that shreds dry areca sheath into small pieces. Cows relish this food. Milk production also has shown slight increase. 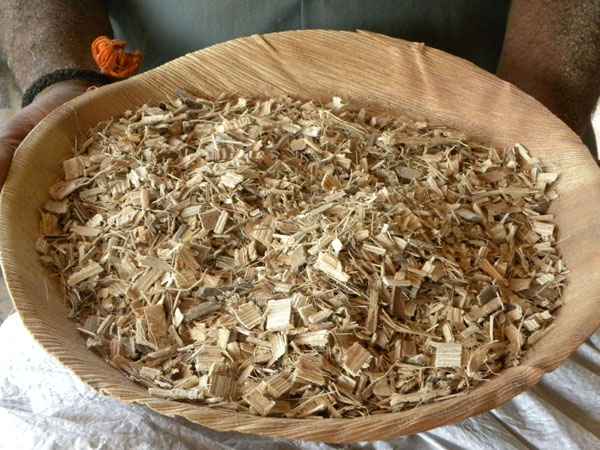 With some fine-tuning  like decentralisation - with the design of still more smaller machines that each farmer household can afford, this areca leaf sheath fodder is likely to be very popular. At present, areca sheath is shredded with the help of big machines  7.5 HP + 5 HP, which are not affordable for individual farmers. Hence farmers use ordinary pulverisers and slicers made for general purpose.

In a sign of good things to come, one mechanical engineer who studied the problem says it is possible to bring out a smaller version of the shredding machine (2 HP). He is currently designing the same.