Want to build a power plant in an ecologically sensitive area? No problem. Just ask the ministry. Its permissions have become routine, and processes are merely paperwork to facilitate the outcome. Kanchi Kohli reports.
22 March 2010 -

The irregularities in India's environment clearance process do not surprise me anymore. Scuttling the norms in the Environment Impact Assessment (EIA) Notification, 2006 has itself become the norm. It is intriguing, however, that the project developers as well as the authorities seem to have an endless number of innovative ways for expediting approvals for questionable projects, each with an elegant way of circumventing the law.

The most recent example comes from the ecologically fragile coastal stretch of Mundra in Gujarat's Kutch district. The area has the best mangroves, intertidal mudflats, creeks and estuaries and grasslands. Each of the ecosystems in this region is deeply connected with the fishing, salt panning, agriculture and grazing-related livelihoods of the people living here. During the last decade, the area has been under severe stress from rapid industrialisation. Large tracts of land has already been diverted for the Special Economic Zones, power plants and other industrial operations. The remainder is on its way there.

OPG Power Gujarat Private Limited is a Special Purposed Vehicle (SPV) promoted by the OPG Group, based in Chennai. On 29 May 2009, OPG disclosed its proposal to set up a 300 MW thermal power plant in Bhadreshwar village of Mundra taluka. The Executive Summary of the environment impact assessment report for the project, prepared for the OPG group by Detox Corporation Private Limited, set the tone for the need for a thermal power plant. Locating itself within the burgeoning industrialisation of the Kutch region, the report began with a clear justification for the need for the project.

Like many other EIA reports, this one too read more like a project design document. It argued that OPG's 300 MW power plant is being set up because, "Gujarat State is among the most industrialized in the country and the peak demand gap is in excess of 15 per cent in the state. Kutch is emerging as a major industrial centre and the Kutch region has two large ports of international standards in Mundra and Kandla which are among the largest ports in the country." Therefore, "the power project is being set up in Kutch to meet the rising demand in the region. It is also expected to service large industrial consumers like Arvind Mills, Shah Alloys etc." 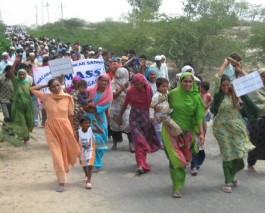 Most EIA reports nowadays read like project design documents rather than assessments made after scrutiny. (Above: villages head to the site of the public hearing in a large procession.)

The Machimar Adhikar Sangharsh Samiti (MASS) which has been working on livelihood and environment issues in the Mundra region, carried out a detailed study of the EIA report, and found several lacunae. At the public hearing, however, the company failed to respond to any of the issues raised by the local villagers or address the discrepancies that were pointed to in the EIA report. (Evidence of this is available not just through press notes and media reporting but also through video recording of the proceedings.) However, the officially recorded minutes are in complete contrast to what really took place at the hearing. Sadly, this is no suprise; such mis-representation of public hearings has become common in the environment clearance process.

A closer look at the site location by representatives of MASS revealed that the power plant will have a severe impact on the Randh Bander at Bhadreshwar, the second largest fish production centre on the Kutch coast. Nearly 6000 fisherfolk from Bhadreshwar, Luni, Tuna and Sangad villages have been using the Bander for traditional fishing for over 200 years. Boat fishing is carried out upto 10 km from the coast and pagadiya fishing is carried out on a 10 km stretch along the coast (5 km on each side of the Bander). There are also other small Banders - Garudiya, Bavdi, Luni and Veera - which are used for traditional fishing. These too will be impacted.

The application for environment clearance for this 300 MW power plant is currently pending with the Gujarat State Environment Impact Assessment Authorities (SEIAA) and its appraissal committee. As per the EIA notification 2006, thermal power projects under 500 MW are termed as 'Category B' and need to take permission at the state level. If over 500 MW, whether a new operation or expansion, then approvals will be considered by the Ministry of Environment and Forests in New Delhi. These projects are branded as 'Category A'. In its letter dated 11th March, 2010 the Gujarat State Expert Appraisal Committee (SEAC) has informed the OPG Group that the environmental clearance for the 300 MW power project will be considered only after the company responds in detail to the issues raised by the local communities.

Expansion plans, even before first phase is approved

But even as this application is pending, the OPG group is thinking bigger. On 3 December 2009, the group submitted an application to the MoEF for establishing the Terms of Reference (ToR) to prepare an EIA report for the expansion of the plant from 300 to 2600 MW. In his letter to the MoEF, OPG group's Managing Director, Arvind Gupta makes no mention of the fact that even the 300 MW plant has not yet been cleared.

Under normal circumstances, it is very likely that this would have gone unnoticed. However, MASS activitists filed a Right to Information application and sought out the details. As soon as this came to their notice, a letter (dated 26 February 2010) was sent to the Envrionment Minister Jairam Ramesh, seeking his intervention. It highlights that the OPG group has deliberately tried to mislead the concerned authorities, and therefore their proposal is liable to rejection, as well cancellation of the smaller plant too.

MASS points to Section 8 (vi) of the EIA Notification, 2006 which states, "Deliberate concealment and/or submission of false or misleading information or data which is material to screening or scoping or appraisal or decision on the application shall make the application liable for rejection, and cancellation of prior environmental clearance granted on that basis. Rejection of an application or cancellation of a prior environmental clearance already granted, on such ground, shall be decided by the regulatory authority, after giving a personal hearing to the applicant, and following the principles of natural justice."

MoEF is yet to respond.

Attempts at contruction before clearance

OPG has also began preparations for establishing the plant in the area, despite not having received permission for the plant itself. This too has become quite common with environmentally sensitive projects. Promoters no longer think of environment authorities as 'scrutinising' their applications; instead they are confident that the clearance will always be given. OPG's preparations have led to violence between local community representatives and the company's security guards, which resulted in the arrest of 30 fisherfolk leaders for over 3 months. Activists allege in their 26 February 2010 letter to MoEF, that the fisherfolk have been falsely implicated in criminal cases to put pressure on the local community to withdraw their opposition to the OPG power plant.

Where will the fisherfolk, salt pan workers, graziers, and farmers find themselves if OPG wins this battle? There is no doubt that the power plant will change the ecological landscape of the region and shatter the livelihoods of thousands of people. The legal protections of environment law, meanwhile, continue to merrily do the exact opposite of what they were enacted to achieve - protecting those who would damage the environment, while accosting and ousting those who have lived harmoniously for centuries in ecologically fragile areas.